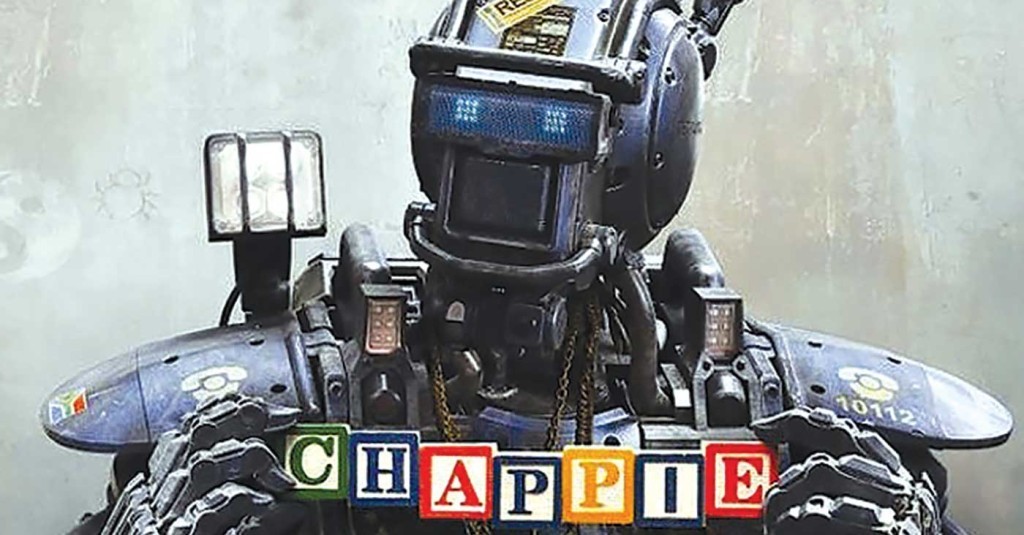 CHAPPIE
2015; $22.98; R
The films of writer/director Neill Blomkamp (“District 9,” “Elysium,” et cetera) are informed by the crime, poverty and misery that permeate his homeland of South Africa — and this film may be his masterpiece. A childlike artificial intelligence (Sharlto Copley), created by computer genius Dev Patel against the wishes of employer Sigourney Weaver, is accidentally released into a broken society where it is adopted by a gang of violent thugs, including punk–gal Yo-Landi Visser. She becomes his “mom”, while “dad” (Ninja) distorts her teachings, tricking the innocent bot into committing crimes and killing people. Watch for Hugh “Wolverine” Jackman, nearly invisible as the disgruntled engineer who sets the whole thing in motion. Simply amazing at every turn; don’t miss it.

TENTACLES/REPTILICUS
2015; $17.94-24.96; UR
This wildly entertaining ‘70s double-header starts with an Italian-made “Jaws” ripoff by low-rent director Olivido Assonitis (which sounds like a job for Preparation H), starring John Huston, Shelley Winters, Bo Hopkins and Henry Fonda, to name a few. To say more might spoil the fun of discovering this legendary bad–movie–party staple — but it is just a wee appetizer before the cracked main course: 1961’s “Reptilicus.” Writer/Director Syd Pink of “Angry Red Planet” fame crafted this Danish turkey in “Cinemagic”, his complicated special-effects technology combining cardboard cut-outs and jerky marionettes to forge a giant titular prehistoric flying reptile, hungry to devour (pause for effect) Copenhagen! Words simply cannot describe how wretched this thing is, but we can attest that it can make two grown men pee on their own couch. Two of our all-time favorite bad movies, now together on Blu-Ray! Our highest recommendation.

LOVEJOY, SERIES 6
1994; $27.98-49.98; UR
The final episodes of this wonderfully rakish series from the BBC collide in a comic shower of Brobdingnagian … Okay, we’re getting carried away, but you would too if you had to describe how much fun this clever, funny, sexy and exciting series has been for the past six seasons. Ian “Deadwood/Snow White and the Huntsman/Jack the Giant Slayer/John Wick” McShane is the kinda-oily/kinda-nice antique dealer/antihero whose best talent seems to be getting into trouble. Yet somehow he always turns things around — if never profitably — with the help of his two rascally partners-in-crime, Chris Jury and Dudley Sutton (“EastEnders”). Just buy it.

THE DRIVER
2014; $25.95; UR
David Morrissey from “Extant” and “The Walking Dead” plays the titular taxi driver; a man down on his luck who accepts a job making pickups and deliveries for ‘Da Mob’ in Britain. But the universe is clearly telling him to turn away, interrupting his every criminal endeavor with an opportunity to reconnect with his estranged wife and son. A simple, obvious little three- episode miniseries, but exceedingly well written and performed as only the BBC can do it.

THE WRECKING CREW
2015; $22.98-26.98; PG
You say you never heard of The Wrecking Crew? No, it’s not a road-rage flick, The Crew was a legendary assemblage of master backup-musicians who performed on hundreds of best-selling albums in the 60s and 70s, ranging from Nat “King” Cole and Frank Sinatra to The Monkees, The Byrds, Elvis Presley, Sam Cooke and The Beach Boys. And the most famous of all was guitarist

Tommy Tedesco, whom Guitar Player magazine heralded as “the most recorded guitarist in history.”  This long-overdue doc follows The Crew from their formation thru classic rock hits to Tedesco’s many TV themes including “Bonanza,” “The Twilight Zone,” “Green Acres” and “Batman.” Awesome.

WELCOME TO ME
2014; $17.98; R
Kristen Wiig, who needs meds to keep her on Planet Earth, decides to toss them in the trash after winning a multi-million dollar lottery, ultimately buying her own Oprah-ish too–much–information talk show in this wildly ambitious off-kilter poke at Celebrity Culture. Wes Bentley and James Marsden are the TV- wonk brothers who green-light her show, with Joan Cusack as its producer. If

you like the humor of Will Farrell (which we don’t) or director Adam “Anchorman” McKay, you might enjoy this.

WILD TALES
2014; $22.98-34.98; UR
This truly unique and inspired six- segment subtitled Brazillian/Agentine black-comedy/drama/thriller is a movie- lovers dream. The central theme — if there is one — is that each of us has a personal limit, past which the insults and vagaries of life may eventually push us. And

when that happens, it may be the shining moment of our lives. Or possibly the worst. Or maybe even the last. But in the grand scheme of things, does it really matter? To say more might spoil the surprise of this wonderful little film that you’ll be talking about for weeks.

BEYOND LOVE
2014; $24.98; UR
This indie Italian drama tells the tale of a pair of attractive lesbians (Jessica Resteghini and Simona Molinari) who have lived as a couple for over a decade, and decide the time has come for them to start a family. First problem is, of course, that they need to find some sperms. Luckily they have a pair of gay neighbors, who are up to their eyeballs in sperms. But now the real problem: They both want to be the birth-mommy. How to choose?

MISS MARPLE: VOLUME THREE
1986; $32.98-44.98; UR
Fans of Agatha Christie’s most celebrated sleuth have been singing the praises of these Joan Hickson-helmed TV mysteries for decades – first in the 80’s when they hit the telly, then when they appeared on home video, and now again as they finally arrive in full HD with crystal-clear sound on Blu-Ray. This 2-disc set contains four perfect tests of observation and deduction, “At Bertram’s Hotel”, “Sleeping Murder”, “Nemesis”, and a special episode wherein our umbrella-encumbered heroine finds murder in the Caribbean. Some of the best TV ever made, courtesy of Masterpiece Theater.

A more complete listing and free vids at www.videotapeworm.com!