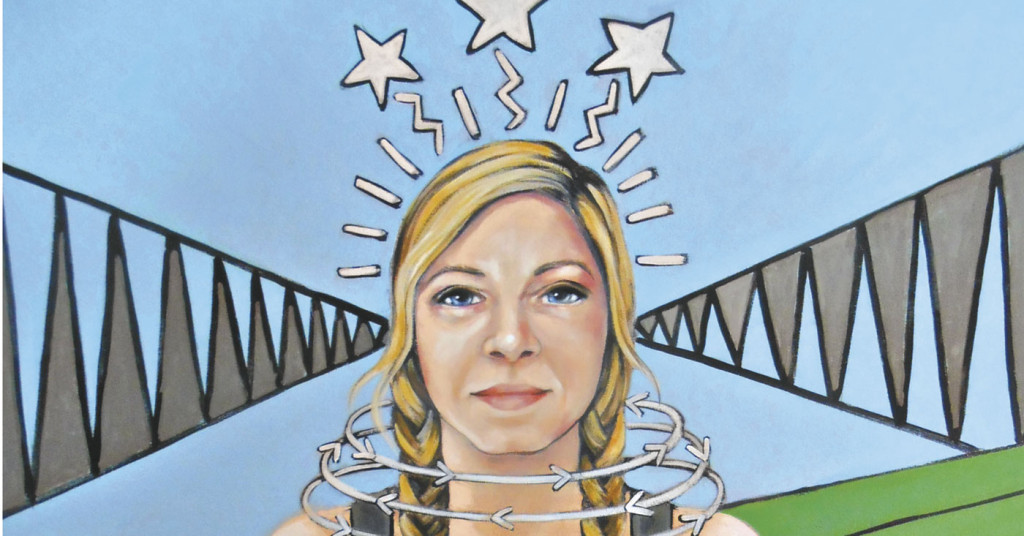 'Self Portrait' by Anessa Arehart

You don’t have to be a NFL running back or a combat veteran to suffer a life-altering brain injury. And according to recent reports, most aren’t. Anessa Arehart sustained her brain injury as a result of two car accidents. The injury has had a profound impact on all aspects of her life, including her painting, which is not only her profession, but now a method of rehabilitation.

In the fall of 2012, Anessa Arehart had two car accidents within seven weeks of each other. The back-to-back concussions caused headaches, dizziness, a ringing in her ears, memory loss, mood swings and the inability to concentrate for long periods of time. Arehart became especially disturbed when she had a hard time spelling her own name. She said it looked foreign to her and she couldn’t figure out which direction the S’s were supposed to go.

After her symptoms persisted for several months, she saw a clinical neuropsychologist for testing. Arehart, 45, was diagnosed with Post-Concussion Syndrome and a major neurocognitive disorder. The lingering effects of multiple concussions had caused a decline in her cognitive ability. Since finding a name for what is ailing her, Arehart’s life has become a mind-numbing routine of vestibular therapy, cranial-sacral therapy and visits to a chiropractor and various brain specialists. But the experience has made her more philosophical.

“I spend a lot of time thinking about consciousness, the perception of self and reality,” Arehart said. “There is a kind of delay in processing information that makes me feel detached from myself, kind of like I’m just going through the motions of life.”

“Some things have improved over the last two years, but it’s when I’m doing everyday, mundane activities that I see the extent of the damage to my brain. It seems crazy, but taking a shower is hard because it just involves too many steps. I drive with extreme anxiety. Driving and going to the grocery store is almost impossible. Any public space with bright lights and beeping machines gets me rattled. An average person can say, ‘I have to run into Kroger and get stuff to make chili.’ Doing that can bring me to tears.”

Concussions have received a lot of attention lately because of research about their long-term impact on former National Football League (NFL) players and combat veterans. Veterans’ advocates believe that up to 30 percent of the soldiers admitted to Walter Reed Army Medical Center have some form of brain injury due to exposure to blasts in war zones. A recent Department of Defense (DoD) report found about 50 percent of soldiers who had concussions that remained symptomatic for more than a few weeks developed Post-Traumatic Stress Disorder (PTSD).  The military now requires all service members within 50 meters of a blast to be removed from combat to be evaluated before returning to duty.

The Department of Veteran Affairs also examined the brain tissue of 79 former football players and found that 76 of them tested positive for Chronic Traumatic Encephalopathy, a progressive degenerative brain disease. This condition has been blamed for a number of high profile suicides among former NFL players, including New England Patriots great Junior Seau. The NFL requires teams to remove players from practice or during a game after a concussion. The league has also committed $25 million to promote youth sports safety and brain injury awareness.

Traumatic brain injuries in the general public still receive little, if any attention, although the numbers are equally disturbing. Nationally about two percent of the population is living with some form of brain damage. According to the Brain Injury Alliance of Kentucky, those numbers are almost double in the Bluegrass state at three and a half percent. Clinical neuropsychologist Dr. Michael Cecil, President of Louisville Neuropsychology, the true numbers could be even larger. He said traumatic brain injuries are often underdiagnosed because of lack of education among the general public and proper testing. People with cognitive and memory issues are not always sure what they are experiencing. Traumatic brain injuries improve over a two year span, but Cecil has also seen patients who have suffered symptoms for years without realizing it.

Brain injuries are as unique as brains themselves. Sometimes a large explosion could cause little to no long-term damage while a relatively small motor vehicle accident or a minor blow to the head might produce a significant level of brain dysfunction. “Brain injury is a very individual-specific type of thing,” Cecil explained. “A neuropsychological evaluation can determine if there are any neurocognitive issues and allow a clinical neuropsychologist to monitor that person over time.”

Nationally, brain injuries happen to be a leading cause of death among children. Cecil said brain injury affects adults and children in different ways. Adults are often able to compensate for an injury because they have fully developed brains. In children, brain injury interupts development and interferes with skill acquisition. Children that suffer traumatic brain damage can see a decline in school performance, have trouble regulating emotions and experience conduct issues in school and at home. If not properly treated, these symptoms get worse as they grow older and school subjects become more complex.

Joey Sarver, an athletic trainer with Pro Rehab of Louisville, works with athletes at Fern Creek High School. He said concussions are a major focus in high school sports because of negative impact brain injuries can have on teens. Every high school athlete in Jefferson County is given a preseason test to determine their cognitive baselines, so a trainer can make a skill comparison after a concussion.

“If an athlete reports any hit to the head or neck, I will do a concussion assessment test,” Sarver said. “If it is determined they have a possible concussion, I set them up with a doctor to be evaluated. They have to be treated by a doctor and back to baseline measures to return to play.”

Cecil said clinical neuropsychologists use neuroanatomical correlates to help locate the area that is damaged in adults and children. “We know that different parts of the brain serve different abilities,” he said. “By testing a broad range of different abilities we get a good picture of global and specific brain functioning. If we are talking about traumatic brain injury there is a wide range of recommendations depending on where a person is in their life.”

In Arehart’s case, her brain injury has impacted her memory and cognitive skills, but it has not affected her passion — painting. Arehart grew up in Georgetown, Kentucky, where she completed her first painting “with intent” at age seven. After years of private classes, she studied art at the University of Kentucky. In the early ’90s, she moved to Louisville where established herself a rising star on the local art scene. Arehart’s paintings have appeared on the covers of LEO and Louisville Magazine and in numerous regional art shows. She has also worked as a gallery director at the Kentucky Museum of Art and Craft and Flame Run Hot Glass Studio and Gallery.

Arehart made her name painting women in vintage clothes with retro hairdos. She often adds text to the images for a hint of social commentary. In the painting “Beauty Rules,” a woman is shown from the shoulder down surrounded by copy related to the application of cosmetics in the pursuit of beauty. Arehart said having a brain injury has changed the subject of her art and her relationship with painting itself.

“I have to paint to feel better, but it is slow going,” she said. “I used to work on several canvases at once. I would have more ideas than time. Now I’m in a strange limbo, but I’m still painting. It doesn’t alleviate my headache, but it somehow changes my headache to a different frequency. It offers some relief.”

In April 2014, Arehart and her husband, Beau Walsburger, moved to a 40-acre farm in Harrodsburg that they call Little Wing Hollow. The move to a rural area has been beneficial to Arehart’s condition. “The only things that do seem to help me are walking and painting,” she said. “Since I spend a lot of time roaming around in the woods, I’ve painted a lot of nature goddesses lately. I recently completed a Chicken Goddess that I’m really proud of. If it wasn’t for painting and living in the woods where it is quiet, I don’t think I would be hopeful that I can survive.”

Arehart and Walsburger bought the Harrodsburg property before her brain injury. Ironically, they always envisioned it as an artistic healing place. Walsburger provides respite care through Seven Counties for families with autistic children on the farm, which boasts a camping area, an open air chapel and a stage. Walsburger also works as a volunteer fireman in Mercer County. Arehart said he has been a rock for her through her illness.

“My brain injury has definitely put a strain on our marriage,” she admitted. “I can imagine living with me has been challenging at best. He is very patient. He is a supportive, happy man. I feel sorry for him putting up for me. I’ve always been very light hearted, but the darker side of Anessa has emerged and she’s not very nice. In fact, she’s kind of horrible.”

Walsburger said he has been able to sympathize with his wife because he suffered a minor brain injury after a fall from a bike in 2006. He experienced some temporary symptoms for a couple of weeks, but he could tell after a few weeks that something more serious was going on with his wife. “Anessa has always been a stickler for correct spelling and grammar,” Walsburger said. “She had a social media business where she was doing posts for local companies. One day, I noticed that she wrote that she had gone in the hill. She didn’t go up the hill or down the hill, she went into the hill. That’s not like her at all.”

Arehart currently has only one social media client left. That is Flame Run, where she worked in the gallery. She said the company continues to use her out of loyalty, but she expects they too will move on if her condition doesn’t improve more than it has already. Art is her only other source of income. Arehart has paintings on display or for sale at the Craft(s) Gallery, Little Loomhouse and the Bardstown location of the North End Cafe in Louisville. She also has begun teaching classes for the Arts Council of Mercer County and a gallery in Philadelphia has contacted her looking for new work.

“I try not to dwell on my brain injury,” Arehart said. “It is what it is and I am where I am. I’m doing everything I can to heal my brain. Certain types of brain injuries have a tendency to get worse, but I’m not going to worry about it now. I know that I am at a greater risk for early onset Alzheimer’s, so I told Beau that we probably should start using the good china now while I can enjoy it.”