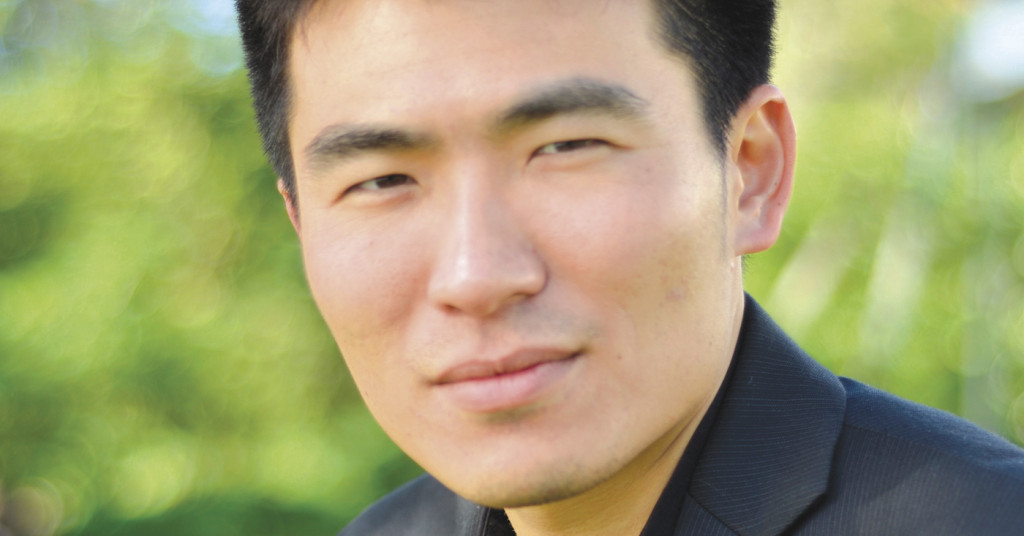 Now here was a new sight at a Louisville Orchestra concert: bicycles tied up to handrails on the steps outside the Kentucky Center for the Arts. Much of the audience for classical music may be graying, but younger fans here (some obviously arriving by bicycle) are turning out in small, but rising numbers for an art form whose heyday came the century before last.

One may be suspect of speeches before concerts, which generally involve many thanks to sponsors. But Abrams, 27, is passionate about presenting commissioned new music by living composers – for which the orchestra was so celebrated in the 1950s and 60s. And he has a nice way of talking with audiences about what they are about to hear.

Abrams noted that historically composers have stepped up to writing symphonies after building an extensive foundation in composition – and turned to Chang, lobbing a softball question about that for the composer to run with. To which Chang answered, “Yes,” hanging Abrams out to dry and handing the audience a nice laugh. Abrams laughed, too, and it was like seeing a couple of pals bumping into each other at a coffee shop. Chang slid up to an upright piano and talked about how his first movement would unfold. Very much, he said, in the conventional symphonic format.

And as the composer stepped off stage and Abrams dropped his baton to begin the symphony, one could feel the audience breathe a silent sigh of relief as Chang’s piece began with a comprehensible flow of chords and melodies. Not without modern edges, but certainly not like one of those things audiences have come to dread in so much new music. No shrieks and dissonant groans. Nobody dropped a recycling bin full of bottles and cans down the stairs. And no gong. Music!

The first movement was not without it problems. In a couple of passages the strings seemed to lose stride against a countermelody in the winds. Abrams broadened his conducting to markedly measure time, beating: One. Two. Three … to help his orchestra through the rough patch. Probably the performers would disagree. But as the players leaned in closer to their stands, it occurred to me the “problem” was more in the orchestration than player error. Something that could probably be rewritten before next time. Like the way a stage company takes a new play to New Haven to work out the kinks before opening on Broadway. Goodness knows, many of the most famous operas of all time began inauspiciously, but ended in greatness. Just an opinion.

But the music shifted and the orchestra was soon humming nicely along again– finishing the first movement well, and proceeding to a sterling showing the rest of the way.

The second movement was a waltz, and “lilted” along — to borrow a word from Chang’s program notes: a “Viennese lilt,” as in the famous Strauss waltzes.

Then in third movement, a touch of jazz, with the piano and basses tumbling into a sound you might hear down the stairs of a Greenwich Village nightclub. Piano, bass, brick walls. The tinkle of ice in glasses. Atmospheric.

The best came last in the symphony’s fourth movement, with the trombones taking over the show. Chang’s score calls for two trombones, a bass trombone and a tuba (Donna Parkes, Brett Shuster, Raymond Horton and John DiCesare), and they brought down the house with a brassy, deep-booming chorus — while the strings chopped up a steel-edged accompaniment. A very interesting combination, reversing usual roles — with the trombones taking the lead, and the fiddles hacking out a relentless chop-chop-chop-chop beat. Violin bowings are marked on the music and the sections bow in unison. Here, the strident bowing proved a special visual treat.

Trombones don’t usually get this kind of musical nod. Perhaps the instrument’s most famous symphonic moment came when Beethoven called upon their authoritative sound in the third movement of his Fifth Symphony. (Which, incidentally, the orchestra performs April 23-25.) But here the ‘bones and tuba were the stars of the show, and it can be reliably reported that Whitney Hall rocked. Not rock ‘n’ roll. But something Sebastian Chang thought up that rocked the room.

After intermission, the orchestra stepped back 138 years for the Brahms Symphony No. 1, which premiered in Vienna in 1876, and has been a diamond of the classical repertory ever since. But, as Abrams pointed out, it was Brahms’ first try at a symphony, like Chang’s.

So familiar is the Brahms symphony (in classical form, and to the players, who have all performed it over their careers) that it could probably be played without a conductor. But of course it is better with a good one — and Abrams provided maestro stokes, waving strings through broad sweeps, listening for the woodwinds and melding the tympani into the music with his fingertips. Abrams reached out to touch his orchestra with the tip of his baton, and the orchestra — obviously inspired — stretched out to meet it.