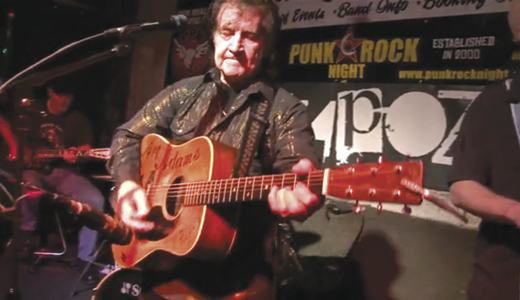 Nearly 50 years after recording his first songs, Art Adams is finally reaping the rewards of his passion for rockabilly music. At one point, after leaving behind the music business to work and raise a family, he never imagined that there would be an underground market seeking out his recordings and clamoring for his return to the stage. I got a chance to talk to Adams about his career. I only asked him two questions, and he filled in all of the blanks with a wonderful tale of life coming full circle.

When asked about his discovery of rockabilly, Adams speech picked up pace, much like that of his music.

“I never did go for the whining and crying so I started doing up-tempo stuff, and bless his heart, I started taking some of Hank’s stuff and started upping the tempo,” he says. “I said to my brother and brother-in-law that I wanted to add a drummer and another guitar player. I went to see Little Jimmy Dickens, and he had two lead guitar players standing side by side. My brothers wanted to do more country, so they decided to do something different. So I added a drummer, Benny Abbott (aka Kentucky Curly). So I still had a drummer and added an upright bass and started doing up-tempo stuff.”

Like many musicians who were the counterparts of Elvis Presley and Carl Perkins, Adams is often asked if these artists were influences on his music. He is quick to dismiss the notion that he somehow came after. He is an original, and his induction into the Rockabilly Hall of Fame is proof.

“Listen, I started doing this stuff before I’d ever heard of Elvis,” he says. “People ask me questions like, ‘Did Elvis inspire you?’ I liked so many of the country guys. In my humble opinion, rockabilly goes way back. Hank did some rockabilly, as did Tommy Collins. When Elvis recorded, ‘That’s All Right’ and Bill Monroe’s ‘Blue Moon of Kentucky,’ I liked what he had done. I liked Elvis until Tom Parker took him to Hollywood.”

While he didn’t follow Elvis musically, he did make the trip to Sun Studio in Memphis, like so many young hopefuls did.

“I went to Memphis and tried to get a recording contract,” Adams recalls. “I talked to Jack Clement because Sam Phillips wasn’t there. He told me to come back because I didn’t have the song that we had recorded.”

Adams never went back. In fact, just a few years later, he quit the music business altogether. Having married and had children, priorities changed. It wasn’t until nearly 40 years later that a contact from Germany and Holland brought him back to music.

“I never thought when I recorded those songs … I never realized they would become so popular in underground rockabilly in Europe and Canada and now here as well. In my opinion, after listening to them for many years, they are unique as far as rockabilly is concerned.”

I relate to Adams the story of my father-in-law, who passed away in 2009, and the discovery of Adams’ song on an underground music site. We talk about the importance that this music has to the people who find it and give it new life on the Internet and in music-trading circles.

Adams speaks in a lovely drawl, the kind that pronounces “humble” with a silent H. Since returning to the stage in 2002 at a Las Vegas party for his friend, the author Larry Goshen, his music has taken him places beyond his imagination.

“I’ve been all over the world,” Adams says.

“It’s humbling to me. I’ve been to England alone eight times. Here I am just a country kid from the hills of Kentucky.”

Now in his 80s, Adams shows no signs of slowing down or quitting the music business again.

“I’m doing a show May of next year in Opryland Hotel for the Muddy Roots [festival]. We did a show in Tennessee for them before. But the show is at Opryland Hotel and it might be as close as I get to the Grand Ole Opry; as a kid, I used to get up in the hayloft, sing and pretend I was in the Opry.”

And Adams is still creating new music. “We’re contemplating going down to Memphis and recording a song at Sun,” he says.