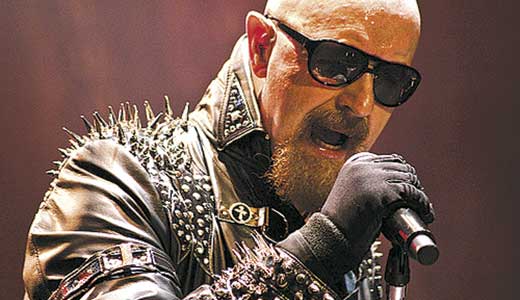 Marking their fortieth year as a band, Judas Priest is hitting the road this fall to support their new album, “Redeemer of Souls,” including a stop in Louisville on the Louder than Life festival. I got the privilege of speaking to singer Rob Halford, arguably one of the top metal vocalists of all time.

LEO: Thank you for taking the time to speak with me.

Rob Halford: It’s a pleasure. We’re ramping up the rehearsals, getting ready to polish the bikes, the leather and studs, and getting ready to go back out on the road again.  It’s a fantastic feeling, ya know, the 40th anniversary of the band and a new record.

LEO: Knowing that you’re coming to Louisville to play the Louder than Life festival, how do you feel about playing festivals? Do you prefer the regular full -production concert format?

RH: Priest has played every conceivable type of stage. We welcome it. Festivals are really special because you’re in the company of a lot of other great talent. At the Louder than Life fest, there are a number of bands that we’re friends with. We’re hoping to see each other backstage. It’s really exciting to play the first-ever Louder than Life festival. We haven’t been through Kentucky for a long time.

LEO: I listened to the album and it was comforting that I could recognize it as a Priest album. To some degree, “Redeemer of Souls” has overtones of anxiety, and some reviewers have commented that the band seems to be looking directly at its mortality. How would you respond to that?

RH: It’s a wonderful testimony for you to say there’s something of a comfort factor as a metal fan like yourself.

It’s been six years since “Nostradamus,” and we knew we had to get back to the real core element of what we’ve been trying to do with our metal. It kind of qualifies the important virtues of this classic heavy metal sound that is still intact.

We’ve tried to maintain a timeline since our very first one 40 years ago, “Rocka Rolla.” I think if you’re a fan of the band, you can feel and hear continuity there. Some really important things happen when a band starts to record music. It’s like a blueprint of what’s going to come next.

LEO: Some of the songs deal with religion and have religious overtones. Have your attitudes toward religion changed? Is religion something that you deal with periodically?

RH: We’ve got the fantasy world of what we do, but we’ve never been afraid to put our toe into the real world.  Let’s face it: with the state of the world now with some of the things happening on the so-called religious platform that are absolutely extraordinary, to make that point, as we did on the song, “Crossfire,” was important.  That spiritual part of my life is very important to me.

LEO: Having seen metal’s many incarnations, how does Judas Priest maintain its integrity as a band without following trends or do you find some useful?

RH: We’ve always said that you’ve got to keep an eye open about what’s going on around you. Having said that, we know who we are, who we want to be and what we want to sound like.  It’s important not to follow the leader because you end up sounding like someone else.  In rock and roll, it’s all about trying to be as unique and original as you can. That’s incredibly difficult. It isn’t easy to be successful in rock and roll.  It takes a lot of effort. (Laughs)

LEO: What bands do you follow?  I’ve read that you’re a huge fan of Michael Bublé.

RH: Yea. I can listen to Bublé one minute, then Janis Joplin the next, then Robert Plant or Ivan from Five Finger Death Punch, M. Shadows from Avenge Sevenfold, some Sinatra and then some Streisand. I’m fascinated by what the human voice can achieve.  I’ve never discounted the fact that by listening to all the styles of music, you can gain valuable insight to see how you might interpret it and put your own stamp on it.

LEO: Metal is often a hypermasculine environment and at times intolerant to female performers or performers from diverse sexualities. Has your disclosure of your sexuality changed how the audience responds to you?

RH: Well, first of all, it’s important not to let your sexuality dictate the way you go in life. I think you should just find a way to embrace who you are and surround yourself with people that accept you unconditionally. I’ve been lucky to have that. I’ve had no rejection.

We’re still in an alpha-male world in metal, and the fact that I can still stand onstage anywhere on the planet and people can listen to me sing and perform in Priest is all I want it to be.  A lot of people from my world are still being traumatized, bullied and executed.  I count my blessings that I’ve got it a bit easier than some of my other brothers and sisters.  It’s kind of a deep thing to reflect on.

It’s an important topic and subject to be stressed because of all of the things that are still swirling around, but I’m so happy the metal world is slowly evolving in acceptance and tolerance. It’s the best way to go.

LEO: How does it feel to be on this end of such a successful career and have fans that have grown with you?

RH: We always say from the stage, when we look out on the audience that they’re like family to us.  Some of our fans have been with us for as long as the band has been around, so we’ve literally grown up together.  We are all; I call it, the metal community-keeping the metal flag flying.  That’s what Priest is still doing all of these years later with the help of our fans who love and support us. s