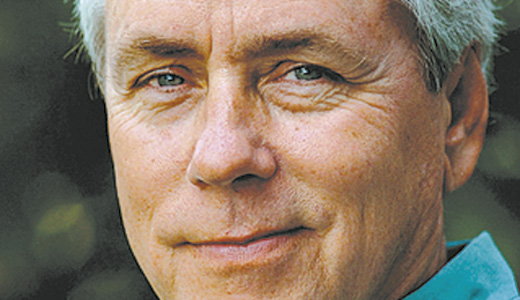 Carl Hiaasen has several devoted audiences: readers of his Miami Herald column; the adult fans who’ve devoured three decades of satirical mystery-thrillers like “Striptease”; and younger readers who came onboard with the Newbery-winning “Hoot.” Now Young Adult (YA) can claim its own Hiaasen novel—the brand-new “Skink — No Surrender,” featuring a scruffy but sage eco-warrior.

For the YA debut, two young cousins work through trust issues while one of them gets in way over her head with an online relationship gone to extremes. The other cousin tries to stay chill, but one of Hiaasen’s most beloved characters comes onto the scene and recognizes the need to sound a wake-up call and charge in with a unique rescue party.

When LEO recently spoke with the author by phone, Hiaasen showed himself to be like the best of his own characters—possessed of a well-grounded wit (exemplified by delightful stories about his odd collaborations with the late, great Warren Zevon) with an inderlying, dedicated drive to preserve literary and natural legacies. The author’s own belief is that readers young and old are fired up by “characters who give a damn.”

LEO: Was it your decision that now would be a good time for a YA novel?

Carl Hiaasen: I didn’t target an audience. I had a story I wanted to write, and as it evolved my editor said it’s probably more for teens than for the younger readers.

LEO: How do you come up with villains?

CH: I start with the characters, usually. But I do also have in my mind certain … scenarios that require a level of despicability. The opening of this book, for example, has a kid walking along the beach, and Skink jumps up out of the sand because he’s lying in wait for egg robbers. That happens — about 10 days ago there was a guy arrested for digging up turtle eggs to sell on the black market. The whole idea of that being your occupation! “What do you do for a living?” “I steal turtle eggs” — I mean, it doesn’t get much lower than that. I didn’t have to work very hard to find that character because these guys are in real life, and as scummy as I present them in the books, it’s not a reach.”

LEO: Since you began writing about environmental concerns, has the attention to them in American culture disappointed you or pleased you?

CH: If you’re writing novels, you’re not setting out to change the world — or even change a mindset. You hope to strike a note with people and maybe galvanize somebody into going to the next county commissioner meeting and going up to the microphone and objecting to the giant department store that they’re digging up the creek to build. But the national conscience of environmental causes — the basic decency of clean water to drink and clean air to breathe — is at a very high level. It has nothing to do with my writing; it’s just been a collective raising of the conscience through journalism — and, to some extent, through fiction.

LEO: Skink’s too good a character to let go?

CH: He’s sort of a good way to vent. He gets away with a lot things … says and does a lot of things I wish I could. So there’s a selfish aspect to keeping him around. But also, my youngest is 14, and he’s a big fan of Skink. I saw [his] reaction and thought, “I guess other kids would like that character.” His heart’s in the right place. He’s a physically formidable guy, but he’s got this incredible sense of justice, and he’s not afraid to stand up to the establishment. All those things appeal to young readers. They appeal to me, too.”