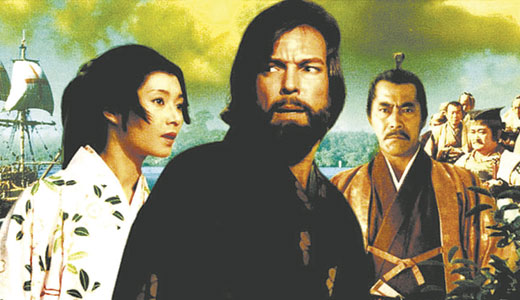 GIOVANNI FALCONE: THE JUDGE/BORSELLINO: THE 57 DAYS

A pair of gritty Italian teledramas based on real events. The first is the true story of the judge who risked his life to expose the Mafia in Italy, eventually shattering the organized crime families that held that nation and much of the world in a grip of fear. A statue of him now stands at the FBI academy in Quantico, Va. The second follows Falcone’s friendship with Judge Paolo Borsellino (Luca “The Italian Kojak” Zingaretti from “Inspector Montalbano”) during the infamous “57 days” in which Falcone was under a sentence of death by the mob. Massimo Dapporto, who has made something of a career playing Falcone, is terrific in both films.

Arguably the greatest miniseries in American TV history, Richard “Dr. Kildare” Chamberlain, introduced US audiences to the romance, action and intrigue of Japanese cinema – making a U.S. superstar of Toshirô Mifune – in this James Clavell-penned masterpiece. In a day with few TV channels and no Internet, nearly every American adult nonetheless ached with little Yôko Shimada, the two men’s doomed love-interest, in a tale of royal intrigue, with steamy (if discreet) lovemaking, and razor-sharp action, all steeped in a brutal alien culture half a world and 5 centuries distant. All 5 chapters, finally available on 3 Blu-Ray discs. A must-own.

Yes, it’s another visit by our old friend, the Flesh Eating Virus, this time with guest star Sean “Samwise” Astin as the titular patient, the only one left untouched after the zombie-ish virus breaks out of its Caribbean lab. Expect more of the usual: hunky, dim-bulb guys, gorgeous nubile women, bikinis, carnage, bloodshed, firearms and a flash of boob. What more could you possibly want from a movie?

That’s pronounced “VAH-gin.” Truly a labor of love, this indie blast is part road trip, part doc, part buddy movie, part comedy, part drama and all fun. A pair of losers tool down Route 66, looking for parts for their beloved, rotting 1972 VW minibus, introducing us to the American subculture of VW bus fanatics along the way. A true labor of love edited on a homemade laptop, it strokes the American Dream while skewering our addiction to dead tech. Pee-your-pants funny, warm and exciting. Don’t miss it.

If you have a fear of bad cops, then we’ve got a show for you. Martin Compston (“The Disappearance of Alice Creed “) returns in this blistering BBC drama about a police anti-corruption squad, co-starring Vicky “Broadchurch” McClure. He is a smart, seasoned cop who knows how to get things done while PO-ing everyone involved in the process. The season opens with the death of an entire witness-protection squad – everyone, that is, except Inspector Lindsay Denton (Keeley Hawes, “Upstairs Downstairs”). A smart, brutal thrill ride for thinking adults.

IFC’s odd little urban vehicle just keeps on a-chuggin’ with Fred Armisen (“SNL”) and Carrie Brownstein leading an ever-evolving, hopelessly over romantic and completely warped troupe of crazies through life in Portland, Ore. Olivia Wilde shows up this season as an animal-rights terrorist, while Kirsten Dunst gets hilariously haunted and Steve Buscemi storms the world as an obsessed celery salesman. If any of this seems odd to you, then you’ve obviously never watched this smart, sassy, literally anything-for-gag hit. Too much fun.

How could we pass up a title like that? Beyond the sweet “prez gets bitten by a werewolf” concept, the execution is even more entertaining – the entire movie is carved out of recycled crap!: public-domain instructional shorts (like what used to pop up on MST3K), stag films, home movies, PSAs, etc. Toss in Smokey The Bear, the Miss Teen Beauty Pageant, a Vice President-versus-8-year-old battle royale, and a plot by Mitch McConnell to sell the US to China, and you’ve got one helluva good time. Okay, McConnell’s not really in there, but it seemed apropos.

Fully titled “Stella Women’s Academy, High School Division Class C3,” this is a Japanese anime series based on a popular manga, never before seen on these shores. The heroine, Yura, a freshman at the Academy, who has trouble making friends until she joins the Airsoft club, proving to be an adept at the harmless air-powered firearms, some the size of AK-47s! (Real guns are heavily regulated and almost unheard of among the Japanese populace.) What makes this so much fun is her wild imagination, pretending to be, for example, an Old West gunslinger, picking off bad guys with trick shots. Another uniquely entertaining Asian pearl.

We’ve just recently begun to watch this Julianna Margulies-helmed drama, set in the corrupt and dehumanizing world of (ugh) lawyers and politicians, after her sex-scandal husband is sent to prison. This season finds her determined to start her own law firm as the sharks gather to end her run as the only good lawyer on the planet. But she eats sharks for breakfast. The season ends with an enticing offer to run for State AG. The best written, best directed, hell, even the best scored show on the U.S. tube today. Masterful.

THE POSSESSION OF MICHAEL KING

Angry over the death of his wife (“Mad Men’s” fiery-haired Julie McNiven), the titular agnostic filmmaker (Shane Johnson, “Saving Private Ryan”) finds his butt in an otherworldly sling after daring a parade of spiritualists to curse him. The grey-blue eyes of kid-actress Ella Anderson from TV’s “Henry Danger” are used to great effect in this minor, no-budget nugget of paranormal nonsense. Surprisingly effective and very entertaining.

Martial Arts master Donnie Yen shines as always as the Emperor’s most-trusted and most lethal servant in this sumptuous Kung Fu outing. An evil manipulator takes over the Royal Court, ousting the Emperor and turning Yen into an outlaw, betrayed and hunted, even by members of his own clan. Tiny Zhao Wei, arguably the most talented and beautiful woman working in Oriental cinema today, is in her element here as the love interest, and ubiquitous Sammo Hung Kam-Bo makes a welcome appearance. An exceptionally good romantic actioner, and damned funny to boot.

Rebecca Hall (“Iron Man 3”) and Richard Madden (“Game of Thrones”) are young would-be lovers in 1912 Germany, except that she is married to his decrepit boss, Alan “Severus Snape” Rickman. When the young man is sent to Mexico, they promise to run away together on his return, only to have WWI get in the way. Many long, hard years later he returns to Germany to claim his prize. Or does he? A artful, well-made erudite piece, and would-be bodice ripper that, frankly, needed more bodice ripping for our taste.

A happily married young couple have it all: their first home (which they got for a suspiciously low price) and twins on the way. Then things start to go wrong: One of the children dies during delivery. A neighbor reveals their home’s dark history. The woman goes deep into depression, becoming attached to a horrible little doll. Then disturbing “accidents” start happening. The very definition of a Hong Kong ghost story (and the 10th movie bearing this title). Nicely icky.

We’ve never been so angry in all our lives as we were after watching this look at the multibillionaire Koch Brothers and their outright purchase of the American Democratic process. Focusing on the rise of the Tea Party and subsequent Supreme Court decisions – effectively bought and paid for by above-the-law corporations – we see the silent machinations of these two unscrupulous assholes and their puppets, the Republican party, who see to it that the rest of us stay poor, wretched and hungry for another generation. Why? Because they can. Your life is just a big game to them. A powerhouse doc from the folks behind “Fahrenheit 9/11” and “Bowling for Columbine.”

As you can guess from the box art, this is a quick, if sincere little horror flick hoping to cash in on the upcoming “Dracula Untold” release. But the battle and curse scenes are mostly flashbacks; the rest of the action takes place in the present as seven highschoolers trek to Castle Dracula for a little dark partying. One bloody ritual later and all hell is literally breaking loose. A fun no-budget outing with a hunky guys, beautiful women, walking dead, and immortal love. Surprisingly entertaining; worth your time.

This wildly ambitious zero-budget horror flick strains to rise above its limited resources, so much so that you find yourself rooting for the film to succeed. Unknowns Jade Elysan and Alan Del Tufo star as a woman suffering through increasingly supernatural attacks, and the stranger who seems to have all the answers. As the bodies start to pile up she comes to understand that the fate of the world may be in her hands. The CGI work is hilariously bad, but you’ll find yourself enjoying this flick because of that very lack of pretense. Indie cinema as it was meant to be.

In a welcome new season of our favorite BBC show (after a 5-year gap from the previous season), Ian “Pillars Of The Earth” McShane returns as the titular antique dealer/antihero, always engulfed in some dark, dangerous and swashbuckling con-game. Frankly, he is a rake; adept at outfoxing those who would profit from the innocent, yet always ready to bed the winsome when the chance arises. This season opens to find him serving a prison sentence, doing community service work by day and locked in a cell at night with a tattooed biker named Mavis, for supposedly stealing valuable furniture. He’s been conned and is determined to find the culprit. We love this show.

A sampling of four largely unavailable gems from unappreciated neurotic/comic Lewis. Best known to the current generation from his bits on the early days of Letterman, this includes his 1979 time on SNL, a never-before-available HBO standup special, the wildly underrated “Drunks” – featuring the greatest cast of legendary nutjobs ever assembled for one movie – and a doc on his former personal home/museum that is both educational and hysterical. And the cover art is by Rolling Stone guitarist Ron Wood! What more could you possibly want from one video!?

SANCTUARY; QUITE A CONUNDRUM

Tired of the same old same-old? This oily horror-comedy is the perfect antidote: Erin Cline and Sasha Ramos are sex-addicted, drug-addled, alcoholic sleeparounds whose only interests are violence, mayhem and debauchery with their friends. (Sounds like our prom dates.) Then it all goes to shit at a midnight pool-party-turned-bloodbath, turning this into the most thrilling thriller of recent memory. Definitely not for everyone, but if you want something different, this is the prescription. Consider yourself educated.

Aren’t they all? This minor German-made nudie-spooker is kinda fun as a preacher’s son becomes innocently ensnared by the charms of a sexy blonde with a little-kid voice (Jytte-Merle “Boom Boom” Böhrnsen). Turns out that she is “forbidden” (duh), and if he nails her he’ll be trapped in Hell for all eternity. Dude! Beats getting married. An entertaining mess with great visuals.

This little Limey yuk-yuk yarn shines thanks to an amazing cast of comics including Pierce Brosnan, Emma Thompson, Timothy “Wormtail” Spall, and adorable Tuppence “TV’s Sinbad” Middleton. Successful businessman Brosnan gets conned out of his business and his employees’ pensions, so he sets out to swindle the swindler’s girlfriend out of her expensive diamond, with help from Thompson. A good, old-fashioned sophisticated romantic comedy caper like they just don’t make any more.

THE SIEGE OF LENINGRAD

Hitler’s downfall came when he decided to invade Russia by way of Leningrad, doing so during the inhumanly bitter Russian Winter. This made-for-TV doc by famed West German filmmaker Michael Kloft follows that bloody trail into the very birthplace of the Bolshevik Revolution, reveling in the heroic action of the Russian people when faced with an unstoppable force of arms and no means of escape.