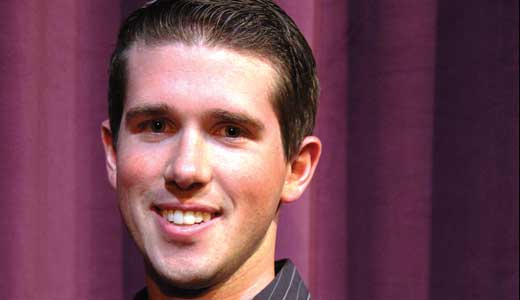 It’s not every day one gets to be called the best at something. There are a lot of other people out there trying to make it to the top. But under the tutelage of director Robbie Steiner, the Floyd Central Theatre program has done just that.

The magazine “Stage Directions” November 2013 issue named Floyd Central the “Best Theatre School in the Midwest.” Steiner, the Highlanders’ theatre arts director, can take credit for that accolade after just two years after taking over for former director Chris Bundy.

An Indiana native, born and bred by the shores of the Ohio River, Steiner grew up in Floyds Knobs and attended Providence High School. He got involved with the performing arts at a young age.

“I started doing local theater when I was ten. I always loved performing — singing, acting, dancing — I got it in my blood early,” Steiner says. Once he made it to Indiana University’s theater department, he decided to change his area of expertise.

“When I went to college, I shifted gears to the directing side,” Steiner says. “I enjoy performing, but I enjoy being a part of the bigger creative process … I love the collaborative process and working with other talented people.”

Now that he has accepted the role of directing a rotating group of teenagers, it has become more of a calling than he expected.

“The thing I really love, especially about teaching, is it allows you to create a family atmosphere and that has become the most important thing to me,” Steiner says of his relatively new gig. “It can give kids a home to be a part of while they’re in high school … teenage years are a really trying time.”

So to combat those trying times, he helps his students put on great shows just across the river. This season’s lineup includes “The Wizard of Oz,” “Nunsense” and a show Steiner said he can’t yet talk about.

The good news for fans of the Floyd Central performances is Steiner isn’t likely to be jetting off to New York or L.A. or somewhere of the sort for a different job any time soon.

“You know, I’m really happy to be here,” he says of Floyds Knobs. “I love it. It’s a great community.”