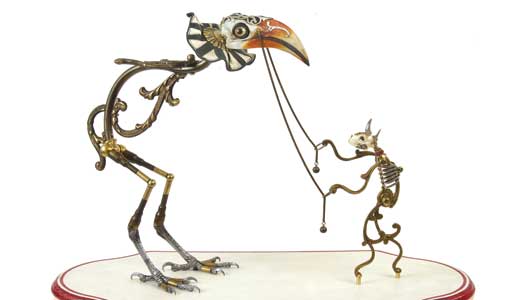 Once you’ve embraced the craftsmanship behind artisan pickles, hand-stitched leather bike satchels and exquisitely waxed handlebar mustaches, you have to admit you’re just one bite of homemade elk jerky away from espousing the gentle art of taxidermy.

Like bourbon barrels upcycled into handsome bar stools, taxidermy takes an object that has outlived (literally, in this case) its usefulness and, through equal parts artistry and craftsmanship, transforms it into something beautiful.

Or at least that’s how the Kentucky Museum of Art and Craft would have you see it. Its new exhibit, “Second Life,” draws on two centuries of animal preservation to explore “the human impulse to give life to the lifeless, to reanimate the deceased and to transcend the body.” The result is a stunning variety of sculpture, collage, photography, video, installation and taxidermy that is inexplicably vivid, vibrant, exotic and pulsating with life.

For curator Joey Yates, the show rests on the pillars of two popular artists, John James Audubon and Damien Hirst. Working in the 1820s and 1830s, Audubon used his skills as a master taxidermist to hunt, stuff, mount and illustrate the nearly 500 feathered species that would be published to great acclaim as “The Birds of America” — a work of art that would have been impossible without the craftsman’s knowledge behind it.

Nearly two centuries later, Hirst’s works tackle themes of death and the macabre, often using preserved animals in the process. True to the museum’s recent mission to expand the definition of craft, “Second Life” is able to accommodate both taxidermy’s traditional expectations in works like Audubon’s and its reinvigorated expression in artists such as Hirst.

Between the two titans are dozens of interpretations, from the whimsical to the profound. Edward Hart’s haunting “Prize Fight” (1850) diorama takes us to the concluding scene of a boxing match between two squirrels, both elegantly clothed in silk trunks stained with the blood of their battle. One squirrel is bowed, the other triumphant, and yet as viewers, we know both animals are, ultimately, dead, and we humans are the evening’s only victors.

Other animals find new life as other creatures entirely, such as Jessica Joslin’s brass-and-bone assemblages that conjure figures in a baroque circus sideshow as Tim Burton might imagine it. Or Charles Fréger’s striking photographs of eastern Europeans from small farming communities, resplendent in beastly costumes of feathers, fur and animal hide, celebrating ancient pagan rites of birth and death and everything in between.

But for Yates, the true impetus for “Second Life” was a 2012 encounter with German artist Jochem Hendricks. The 50-something provocateur had gained notoriety, in part, for creating a pack of taxidermied fight dogs, resurrecting them from a cruel existence to live out a peaceful afterlife among the immaculate white walls of art museums around the world.

While Hendricks’ dogs are not part of the show, “Second Life” does include two of his works that are arguably more powerful. “Left Defender, Right Leg” features a synthesized 2.8-carat diamond — unsanded, uncut and utterly unremarkable if not for its provenance. Just years earlier, the diamond had, in fact, been the leg of a European soccer player.

It’s as simple as this: The leg had to be amputated, the player agreed to donate it to Hendricks’ project, scientists transformed it into carbon and the carbon into ultra-pure graphite. From this, the synthesized diamond was formed. In Hendricks’ photograph “Oleg’s Ear,” the subject’s left ear — again, amputated out of medical necessity — has been transmuted into a tiny diamond embedded in a golden stud, which Oleg wears in the remaining lobe of his left ear.

“One of my initial selling points for the show was that we think about this stuff all the time,” says Yates. “We make decisions daily about funeral arrangements, because we want to signify a person. We make decisions about preservation, about cosmetic surgery.”

If anything, “Second Life” demonstrates that physical death is only one of many transformations in a natural world that is constantly in flux. And yet, through craft, we discover the beast can be made tame, the dead made new and even the ugliest parts of ourselves made fashionably elegant.