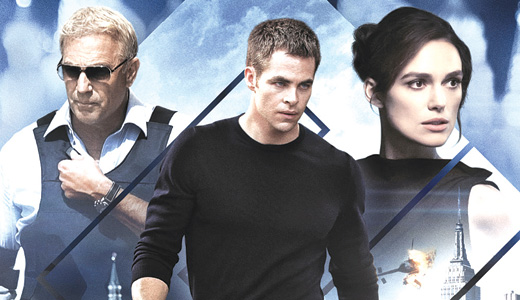 Chris Pine boots up this new franchise on the early exploits of Tom Clancy’s seminal spy (previously played by Ben Affleck, Harrison Ford and Alec Baldwin), with help from a great cast including Keira “Tasty Neck” Knightley, Kevin Costner, Kenneth Branagh and honey-haired Maxim stunner Elena Velikanova. While we chafe at the notion of Ryan’s deadly skills diluted to a PG-13 rating, this is an immersive experience, following Pine from college in London to Afghanistan and beyond due to the events of 9/11. It’s a more action-oriented take on the character than the brilliant strategist you find in Clancy’s books, but we like it.

It is said that a true actor can move us while his feet are glued to the stage. Here Liam Neeson proves that adage by taking on an invisible terrorist/extortionist while trapped in a confined airplane cabin with hundreds of screaming passengers. A wildly contrived and thoroughly ridiculous movie that never lets you notice these facts, thanks to LiNee’s screen presence, a clever script and great co-stars such as Julianne Moore, Lupita Nyong’o, Scoot McNairy (“Argo”) and “Downton Abbey”’s Michelle Dockery. Won’t change your life or anything, but entertaining as hell.

This tease-comedy stars Emma Roberts as a naïve would-be poet, drowning in student debt, who takes a job at a sleazy sex shop to tick off her parents while “pursuing her dream.” Part of that dream is to mentor under Rat Billings (John Cusack), a spacey beat poet. While generally quiet, friendly and sane, even making friends with Evan “Kick Ass” Peters, she goes completely meshuggah where Cusack is concerned, to the point of stalking him on a tandem bike with transgender Armando Riesco. Fun.

Carl Sagan’s original 1980 “Cosmos” literally changed our lives, inspiring us to embrace our love of science, leading to degrees and careers in engineering and math. (You didn’t think we actually did this for a living, did ya?) And while we may have some quibbles about this updated version hosted by Neil deGrasse Tyson, we think Carl would have approved. A visually stunning, heartfelt and personal celebration of mankind and his less-than-significant place in the universe, moving the viewer to embrace his own greater destiny. With profound love for our fellow shipmates, we beg you: Re-discover the exquisite joys of learning.

Colin Firth, Reese Witherspoon, Dane DeHaan (“Amazing Spider-Man 2”) and a host of other greats lend their talents to this true tale of murder, “devil worship” and institutionalized vengeance in America. Three youngsters are found slaughtered on May 5, 1993, and the “obvious” suspects are dark-clad teens, believed to have sacrificed the children as part of a Satanic ritual. The evidence is all but nonexistent, but the parents of the victims and the rest of the community demand blood for their pain, despite the growing realization that a killer is still hiding in their midst. Terrifying.

Originally titled “Zombibi,” this nicely warped undead comedy from the Netherlands has the unique distinction of, uh, being from the Netherlands. A spaceship crashes in Amsterdam, releasing the usual rotter-virus, and one poor schlub spends the movie battling cross-country to rescue his would-be true love. But here’s the part to remember: The girl is played by Gigi Ravelli — The single most beautiful creature on the planet. Seriously, dude! Have you SEEN this babe?! Holy mother of freakin’ god! Google now, we’ll wait! — playing a damn funny, ass-kicking cop. Laugh-filled bloody horror with Nordic physical perfection.

Underrated actress Tatum O’Neal will completely blow you away in this drama about a woman (O’Neal), recently released after two decades in a mental hospital, who comes home to rural 1950s Missouri, facing the toll she’s taken on her sister (Penelope Ann Miller) and family. Then, to top if off, a devastating flood threatens all their lives. A very dark film based on real occurrences in the life of writer/producer/director Connie Stevens, co-starring Michael Biehn and Piper Laurie.

One of our favorite underutilized actresses, Rumer Willis, stars with Chris “Weeds” Marquette in this truly brilliant, painful and cathartic roadtrip through America’s least-traveled byways. She’s a victim of childhood abuse who runs screaming out of L.A. He’s a hermit, obviously suffering from an obsessive-compulsive disorder, unable to understand social conventions yet brilliant at detailed tasks. Apart they are lost, but together they just might fit. Indie cinema at its best.

A doc unlike anything we’ve ever seen. Inventor Tim Jenison is obsessed with the paintings of Dutch master Johannes Vermeer, excitedly demonstrating how his photo-realistic paintings of the 1600s — created over a century before even the most crude photography techniques — must have made use of some hidden, undiscovered technology. But what? His search for answers takes us to some surprising places and surprisingly clever people, including Martin Mull, Penn Jillette and Teller, who directs. A unique trip of the mind.

A truly disturbing doc on the 232 real, measurable and potentially deadly (or completely unresearched) chemicals that each of us has in our bodies, and who put them there. And no one seems to be involved in a solution: not the industries that created them, not the health professionals who see our lives getting shorter, and not government regulators, overwhelmed by industry lawyers and their paid-off politicos. But the doc takes an informed approach: Here are the facts; here’s what we know; here’s what you can do. Recommended.

For the sadly uninitiated, James “Big Joy” Broughton was a marvelous man, way ahead of his time. By the 1930s, he had created some of the most entertaining experimental films you are ever likely to see, and he was a Beat Poet before Jack Kerouac found puberty. To top it off, his personal mantra of “Follow your own weird!” was the heartbeat for a dozen social movements that had yet to find a name or a voice. This is a man you should know. Lots of fun; recommended.

Being able to define this entire miniseries in the sentence, “Michael Palin shows us the sights of Brazil,” doesn’t begin to describe the fun of Pythoner Palin’s blithe and unpredictable asides as he wanders the length and breadth of that South American enigma, talking himself into and out of trouble along the way. Four episodes on one disc. The neophyte should also check out his DVD visits to the Himalayas, British Rail, and the “New Europe.”

Given the rather staid plot, this is an oddly exciting Kung Fu’er. A master of Mugen-ga-ryu (integrated Martial Arts) goes on a yearlong quest to best the masters of the seven great Martial Arts disciplines. Along the way, we learn about “Budo” and Bushido, and why his quest is so important to mankind. Like we said, surprisingly entertaining; don’t be surprised if you find yourself reaching for the phone to enroll at your local Tae Kan Do academy.

Today’s hour-long dramas suffer greatly from over-commercialism, losing more than 1/3 of their run time to ads. But in 1967, “Cimarron Strip” represented the best that TV had to offer, and proved it by running a full 90 minutes per episode, and with less than half of today’s commercial interruptions. The star, of course, was master thesp Stuart Whitman, whom viewers of a certain age will recognize as Pa Kent from “Superboy,” or Laredo Jake Boyd from several “Walker, Texas Ranger” outings. The stories – written by some of America’s best – center on the duties of Marshall Jim Crown, The Law in the Oklahoma Panhandle at the very end of the Wild West expansion. Simply a must-own for any fan of great TV.

Director Michael Fischa clearly has a soft spot for the awful ’80s, evident in this throwback about a high-tech gym whose electronics become infected with the malevolent spirit of the owner’s dead wife. Lots of hot-looking men and women get bent into impossible shapes (just like every gym we’ve ever visited), then pierced, sliced and skewered before receiving their complementary latte. Blonde scream queen Brenda Bakke shows her boobs. What’s not to like?

If you’ve asked yourself lately, “I wonder what Elijah ‘Frodo’ Wood is up to these days,” well he’s making somewhat artsy/indie movies such as this John Cusack/Kerry “Argo” Bishé drama. He plays a concert pianist with stage fright, about to go on for his comeback performance. Problem is, Cusack is gonna kill him and his wife if he hits just one wrong note! Hey, no pressure.

A host of Jewish celebs brighten this Kosher comedy about a family’s introduction to their supposedly straight son’s new non-Jewish boyfriend. They comically keep it under wraps until the two decide to adopt a child, which for some reason makes the evening news. Watch for Carmen Electra, Saul Rubinek, Lainie Kazan and a host of TV faces, all kvetching to a great soundtrack.

The world ends, then comes the drama. And with actors of the caliber of Josh Hartnett, Teresa Palmer, Alexis Bledel, Rosario Dawson, Gena Rowlands and Frank Langella – just to name a few! – there’s a lot of drama to pass around. The central premise involves a war-spewn man-made virus scheduled to kill everyone and everything, and a trio of lovers at different points in their lives, all trying to make the “right” decisions. Imagine “Contagion” without the happy ending.

If you’ll pardon the overused term, Liev Schreiber is simply awesome as the “fixer” for big-money clients in this Showtime series that nicely fills the void left by “The Sopranos.” With a combination of ruthless muscle and brilliant strategy he can make any problem go away – except for the problem of his own wildly fractured family, starting with his father, Jon Voight, who is unexpectedly released from prison as the series opens. To say more might spoil the fun. Highly addictive and highly recommended.

A documentary look back at America’s most devastating natural disaster. Katrina? Nope. The 1927 Mississippi River Flood made that look like a diaper-wetting. America’s longest river overflowed its banks in nearly 150 places, wiping away entire cities, families and cultures. Over 27,000 square miles were flooded, some as deep as 30 feet! But something incredible grew out of it: music. Everything from Chicago Blues to Rock and Roll, can claim “the flood” as its birth event as displaced southern blacks moved North because there was simply nowhere left to go. With no spoken dialog, filmmaker Bill Morrison and guitarist Bill Frisell brilliantly tell the tale.