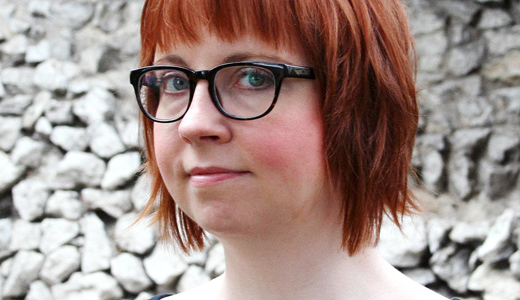 Confession:
I did not love Bruce Springsteen until
I turned thirty and set my own home on fire,?
walked away from the ashes and looked
my declining self in the face. Like love,?
Bruce is wasted on the young.?
—Erin Keane, “The Dream and What Follows”

Erin Keane loves a project. The WFPL arts reporter knows how to tell the stories of others, but that’s not what her three books have been about. “Demolition of the Promised Land,” her latest, is her newest collection of poems (some, but not all, of which feature Bruce Springsteen). Like Springsteen’s most recent album, it’s a new release, but not her most recent writing.

“I started writing this after my second book was written, before my first book was published,” Keane says. “And I don’t have another one waiting — this is it.”

Her first, “The Gravity Soundtrack,” was published in 2007; her second, “Death-Defying Acts” (about life in a circus), hit stores in 2010. The new book took so long because “it didn’t really have a coherent theme for a very long time. It didn’t have anything to tie it together,” she says. “When the Bruce Springsteen poems started happening … that started to really shape how the book was going to come together.”

That was in 2011. She had begun working on the other poems in 2007 with a Lent-inspired daily writing exercise. “I had finished this other project, the circus book, and I wanted to get back to writing in my own voice. I didn’t really know what that was at that point — I’d spent a couple years writing in the voices of these other characters.”

She wrote around 40; of those, maybe 10 made it, she says. “They were the ones worth sticking with.” Over the last few years, the rest started to take shape. “I’m slow, because I work a lot,” she laughs. “This book was a mess, a total mess, when my editor (Lindsey Alexander) got her hands on it. It was really an intense collaborative process.”

The most important way her editor helped was by challenging Keane to clarify who was speaking — or being spoken to. She pushed Keane away from “using the second person instead of the first person: ‘You do this’ and ‘you do that,’ which you think is a way of generalizing your poem,” says Keane. Writing in persona, as she did for her circus tale, “You’re either a fictional character or fictionalizing a real character. It’s still the way you dream that this character would interact, which has some percentage of me, the writer.”

The edits gave her poems “a strong sense of authority,” she says. “Except for the Bruce Springsteen poems — well, some of them are weirdly autobiographical, also. The poem ‘Decomposition Studies’ is about my mom.”?

“The Springsteen poems were never going to be in the voice of Bruce Springsteen, because I find that to be the most presumptuous thing,” she laughs. “So instead, it’s my narrative voice that’s moving him around in fictionalized situations … like a superhero or an action figure. It’s all my version of the truth. This is a very personal book, and that’s entirely frightening to put out there.”