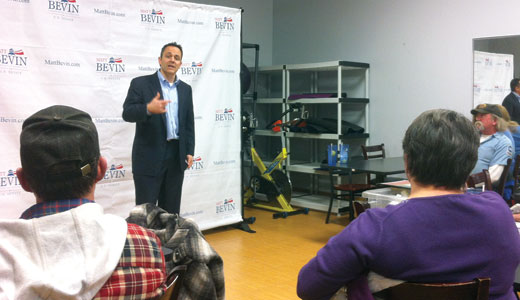 Most political observers give Louisville businessman Matt Bevin little chance of shocking the political establishment by defeating the most powerful Republican in the U.S. Senate. But according to Matt Bevin, that’s just the way he likes it.

While McConnell’s campaign has dismissed him as a trivial nuisance soon to be easily dispatched — despite also smearing his character with a heavy rotation of ads painting him as a dishonest carpet-bagging con man — Bevin started his town hall by pointing out visual evidence of how feared he really is: the presence of rival campaign trackers videotaping him in the back of the room, hoping to catch a statement that can be turned into an attack ad against him.

“Alison Grimes and Mitch McConnell spend a lot of time these days trying to pretend, on the one hand, that we’re insignificant and not to be bothered with, but on the other hand, paying a lot of good money to follow us everywhere we go and tape every word that we say,” said Bevin.

Bevin answered a wide range of policy questions during the two-hour town hall, a stark contrast to the campaigns of McConnell and presumptive Democratic nominee Alison Lundergan Grimes, who typically keep their events and talking points scripted, with limited questions to trip them up.

His performance drew a familiar resemblance to that of Sen. Rand Paul when he burst onto the political scene in his 2010 primary, both in terms of his openness to expand on any policy question and his support for dramatically limited government, the hallmark of the Tea Party movement Bevin hopes to inherit and ride to an upset victory, like Paul.

However, Paul — eyeing a 2016 presidential run — is not along for the ride, forging an alliance with the prolific fundraiser McConnell, and lending his popular political star to Kentucky’s senior Senator with his endorsement (though choosing not to join in the mudslinging against Bevin).

While the lack of Paul’s blessing has hamstrung Bevin’s chances of victory, his campaign is quickly picking up momentum and powerful Tea Party PAC allies. The Senate Conservatives Fund has already spent $1 million toward Bevin’s campaign, the Madison Project is opening five field offices in Kentucky next month, and the new Unbridled Liberty — founded by Greg Fettig, a key figure that helped Richard Mourdock upset longtime Indiana GOP Sen. Dick Lugar in the 2012 primary — plans on flooding the state with out-of-town Tea Party activists.

While recent polls show McConnell with a large lead over Bevin – whom many Republicans are still unfamiliar with — that margin has shrunk from nearly 50 percent last summer to 22 percent in an independent poll released last week. Matt Kibbe, the president of Tea Party grassroots juggernaut FreedomWorks, even hinted last week that they may join the fray for Bevin, noting that due to McConnell’s horrible approval rating, Bevin may be the only Republican with a legitimate chance of beating Grimes.

But are local and outside Tea Party support really enough to topple McConnell and his massive $10 million war chest, along with his support from nearly every elected Republican throughout the state? Or is the Tea Party magic of 2010 and 2012 primaries a relic of the past?

The crowd at Bevin’s town hall, was a familiar one if you’ve attended any Tea Party rally in Kentucky over the past five years, warmly receiving his anti-government message that targeted the ills of the Obama administration, as well as accusations that McConnell has sold out conservative principles.

Bevin trotted out his familiar attack lines against McConnell, painting him as an out-of-touch politician who doles out special favors for contributions and legislates with his finger in the wind. Bevin says McConnell may talk a conservative game of late, but he doesn’t back it up with action, pointing to his support of the $780 billion bailout of Wall Street in 2008, his supposed lack of action on gutting Obamacare, and his complicity in racking up the nation’s $17 trillion debt throughout his career.

Bevin also expanded on some less-worn themes to differentiate himself from McConnell — which happen to also mimic some of Rand Paul’s favorite lines — favoring scaling back domestic surveillance, the drug war and military entanglements overseas.

“The idea that the federal government should be able, with impunity, to spy on law-abiding citizens is wrong in every way,” said Bevin. “And I’m running against a man in this primary who has been an unapologetic supporter of — and unwavering support continues to be given to — the NSA and the Patriot Act.”

While some of those stances might draw bipartisan appeal, Bevin also laid down the gauntlet on dramatically cutting back government programs, assistance and regulations.

Referring to the recent SOAR Summit organized by political leaders to brainstorm what they could do to help the depressed economy of Appalachia, Bevin said, “We need to stop asking what the government can do to solve these problems. What we need to ask is can the government stop doing.” (While he blamed EPA regulations for much of the damage to the coal industry – and McConnell for not doing more to block the nomination of Gina McCarthy to head the agency last summer – he also acknowledged market forces playing a role.)

Bevin also mocked the recent push by Democrats to address income inequality, arguing that the government should refrain from picking winners and losers and let the free market play itself out.

“As Margaret Thatcher noted, socialism always works great until you run out of other people’s money,” said Bevin. “There is no perfect panacea that will create wage equilibrium.”

Those views extended to raising the minimum wage to $10, which has recently been advocated by Grimes and Democrats around the country. Bevin says this would only lead to price increases and less employment.

“Everybody who ever proposes increasing the minimum wage, including Alison Grimes, has clearly never employed anybody… without our money,” said Bevin. “And who really gets punished? The people who don’t have that $10 or $12 or pick that number dollar an hour job.”

While McConnell voted for a minimum wage increase in 2007, his campaign is busy moving to the right, now labeling the current push to increase the minimum wage as “class warfare.”

Bevin also argued that the private sector does a better job than the government in every field, including transportation and education. He said the $175 billion spent on the Head Start program has been a total waste, as would early kindergarten.

“Why in the blazes then would we keep pouring money into a system that clearly does not work?” asked Bevin. “And the answer we keep getting is we just need more money to make it better… So we’re going to take children away from their parents for even longer periods of time, making them wards of the state to an even greater degree, but with no measurable effect.”

Asked by a Latino man what the Republican Party could do to soften their image among minorities – who are currently fleeing the party in record numbers – Bevin, who criticizes McConnell for supporting “amnesty” in 2007, gave a meandering answer that making them dependent on the government does them no good, but empathy should be shown. He dropped the common conservative catchphrase “American exceptionalism,” arguing that our pursuit of happiness free from government dependence and interference is what makes us great.

“We’ve gotten removed as a culture from this melting pot idea,” said Bevin. “We have so many hyphens now, and so many divisions, and so many classifications, that we’ve become our own worst enemy.”

As is the case with several other issues, McConnell has moved to the right on immigration and voted against a reform bill last year, which many attributed to the presence of a primary challenger to his right flank.

One area where Bevin strays from his small-government advocacy is abortion. He pointed out Angela Minter, the executive director of Louisville anti-abortion group Sisters for Life, saying she is “probably the greatest advocate for any one thing I’ve ever met in my life,” and shows the passion and conviction on this issue that elected officials need. In a Monday press release, Bevin touted her endorsement, as well as his financial support and board membership for A Woman’s Choice Resource Center in Louisville.

Minter regularly stands outside of Kentucky’s only full-time abortion clinic in Louisville, yelling at people who enter the building. A Woman’s Choice — next door to the abortion clinic — is lambasted by reproductive-rights advocates for providing false medical information and attempting to deceive customers into believing it is an abortion clinic.

Bevin’s campaign has not responded to LEO’s questions asking if he approves of the physical and verbal confrontation that regularly takes place outside the abortion clinic.

The statistical pathway to “send a shockwave through the political establishment” in May’s primary was laid out by Bevin to the audience, who said he would need to raise $4 million to win, which he’s over a third of the way to. Bevin also said that due to low voter turnout in primaries, he would need 16 percent of registered Republicans to vote for him, roughly 175,000 people.

Bevin said that due to McConnell’s abysmal approval ratings in Kentucky, the only chance he has to win is by smearing his opponents and making them just as unpopular as he is, and McConnell is certainly not lacking in money to go toward negative ads.

“By the time we’re done, Aqua Buddha will look like a warm-up act,” said Bevin.

According to Bevin, it will be the enthusiasm of his grassroots supporters — and lack thereof for McConnell — that will overcome the negative ads and lead him to victory.

“The advantage we have is that people on our side of the equation in this particular race actually care about the candidate,” says Bevin. “There’s a passion and enthusiasm for what we’re doing on this side that does not exist on the other side. People come to my events as volunteers and are willing to help because they believe in what they’re doing. Mitch has to pay people to come help him out.”

“This is our race to be won. We can do this. It is not insurmountable. And I tell you what, if we don’t do it now, then heaven help us.”