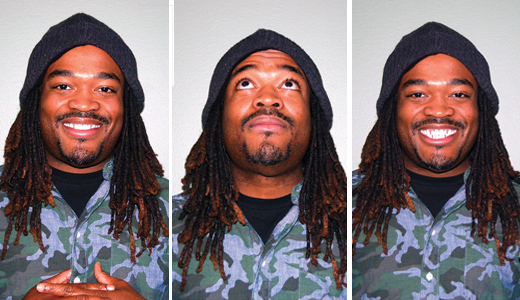 When I was a kid, I wished I could be invisible. Not in the way Superman comic books and cartoons inspired young boys everywhere to imagine being imbued with gifts of strength, X-ray vision and the power of flight. My desire had a much more practical application.

I learned in elementary school that when boys retrieve things from the ground, they squat at the knees. Only girls bend at the waist like I did. Invisibility would cloak me from the judgmental eyes of others on those unfortunate occasions when I dropped my books or pencils.

I wanted to be invisible during every gym class that involved team sports and allowed the star athletes to pick players for their teams. For some reason, I was always picked last.

It took me a while to realize the problem wasn’t in my own young, gay black existence: It was in the invisibility of the gay black folks around me. When I was young, I had too few black gay role models — and not because there was a dearth of black gays.

Too many of my queer black and brown brothers and sisters were being forced to lead invisible lives. Some did it out of safety, while others did it out of comfort. Just as with light-skinned blacks in the antebellum South, “passing” had become both a means of survival and a chosen way of life.

And so my column is called In Visible Ink. As best as I can help it, no child will ever again wish for the power or protection of invisibility. Instead, he’ll desire to join the ranks of a real life Justice League. However, there will be no avengers hidden behind masks or secret do-gooders who live double lives, but rather a new cadre of avengers.

Over the years, I learned that visibility broadens the discussion of social issues and creates its own language of power.

Every time I heard black activists like Bernice King or Louis Farrakhan insist or imply that homosexuality was a “white thing” and antithetical to a strong black community, they must not have seen the Black Panther with the badass afro named Angela Davis, or Bayard Rustin, the mastermind behind the 1963 March on Washington and the person who taught Dr. Martin Luther King Jr. the principles of nonviolence.

Every time a black pastor said that God hates fags and there is no reconciling a gay orientation with a Christian identity, they must not have seen the Rev. Dr. James Cleveland, founder of the Gospel Workshop of America, or Archbishop Carl Bean, founder of the Unity Fellowship Church Movement.

Every time the TV and movie screen relegated black gay men to snap queens, sassy hairstylists and other accessories for suburban housewives, Hollywood clearly did not see the brilliant contributions of black gay men and women to the arts, like famed choreographer Alvin Ailey; Moms Mabley, the first woman standup comic; and, of course, the legendary Josephine Baker.

The anti-gay black politicians did not see Rep. Barbara Jordan, the first African-American elected to the Texas Senate after Reconstruction.

Those who criticized Frank Ocean and questioned if there is a place for queer people in black music did not see Gladys Bentley, a blues singer during the Harlem Renaissance, or soul singer Johnny Mathis, or Nona Hendryx, or Billy Preston, or Bessie Smith, Empress of the Blues.

If you ask me, Superman ain’t got nothing on these folks. Once I learned my history and the contributions of queer black people, I learned that self-acceptance is the greatest super power.

It was black woman warrior poet Audre Lorde who said, “I have come to believe over and over again that what is most important to me must be spoken, made verbal and shared, even at the risk of having it bruised or misunderstood.” In as much as I can help it, never again will the lives and stories of queer black folk — or the lives and stories of other disenfranchised and underrepresented people — go unnoticed. No more kids should wish to be unseen or overlooked. Instead, they will know that coming out is no small feat, and standing loud and proud is truly super human.

Welcome to In Visible Ink.