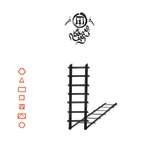 Mr. Bungle’s Trey Spruance has spent years crafting an unorthodox and expansive musical universe in Secret Chiefs 3, one shrouded in mystery and unpredictable cross-genre pollinations. Like past efforts, Folio A sports a prominent orchestral component that supports and threads throughout. This adds a colorful veneer to the swirling Persian mysticism of “Balance of the 19th” and leads to rousing pieces of imaginary film score, most spectacularly so on “Scorched Earth Saturnalia.” Several jarring electronic-meets-metal anti-interludes are scattered throughout and break up the otherwise calm flow with quirky bursts of noise. Mike Patton makes a scintillating appearance, gracing the heavenly Western pop of “La Chanson De Jacky” with his oddball crooning. With Folio A, Secret Chiefs have given us another release that prides itself on intricately composed and eclectic songs delivered with an indifferently divisive attitude.