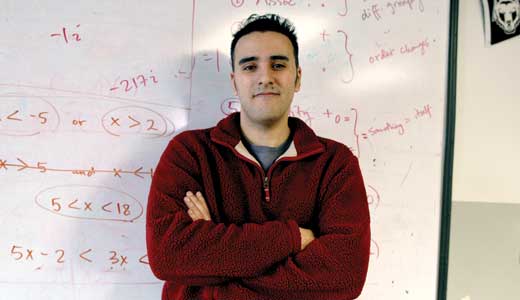 Most people are abstractly aware that inequity exists in the education system; they’ve seen shocking statistics about the differences in graduation rates among whites vs. blacks or the privileged vs. low-income, but they’ve never witnessed it firsthand. Moshe Ohayon isn’t most people. He is one of the few who have stretched their arms across the educational gap and felt just how expansive it truly is. Even more rare, he actually decided to do something about it.

It all started when Ohayon lost his tutoring gig with a No Child Left Behind program in downtown Louisville and decided to open Louisville Tutoring Agency instead. He was quickly struck by the differences between the two groups of students. At the former, kids lacked basic arithmetic knowledge and maybe knew a person who’d taken a college class once. At the latter, kids received additional tutoring for classes taught at their expensive private schools or prep academies, and attending college was inevitable — something everyone did after graduation.

He decided to create a side project called Educational Justice to see what might happen if every student got the same opportunity. He reached out to local public schools to find high achieving students with low ACT scores. These “mismatch” kids were obviously intelligent but lacked skills for standardized test-taking, so he taught them those. The first Educational Justice scholar raised her ACT score by 10 points.

Schools were ecstatic about the results of these students, but they all had the same request: Please help our underperforming students, too.

That’s when the next projects began: first, a series of free ACT prep courses for high school students, followed by a “math boot camp” for middle school students, then a free linguistics-focused ACT course at West End School for students who aren’t as familiar with the standardized English used in formal tests.

Next year, they are rolling out an updated pilot program that pairs honor students bound for the Ivy League with underperforming middle school students for one-on-one mentoring and tutoring. Ohayon hopes it bridges academic and cultural gaps and inspires the next generation of educational innovators.

That his life is so focused on education perhaps isn’t all that surprising. The son of two teachers, his parents always stressed the importance of education, even after they immigrated to the United States from Israel when he was 8 years old; and because of the cultural barriers his parents faced, Ohayon reached a point where he had to teach himself things or help his parents understand things. All this contributed to his ability to communicate and teach effectively and innovatively.

The Center for Nonprofit Excellence recently awarded Educational Justice with the 2013 Pyramid Award for Excellence in the Art of Vision. It’s a nice honor, but if you want proof the nonprofit is doing something right, the strongest evidence may be a recent trip Ohayon took to a local middle school. There, he explained Educational Justice was going to let students sign up for the tutoring program on a first-come, first-serve basis — a departure from previous years, when students had to be chosen by a counselor. He stressed the hard work, but reminded students of the opportunities that could sprout from it. After he was finished, students mobbed the counselors for applications. Some called their parents and begged them to swing by the school to sign the form so they could turn it in immediately.

“It was amazing,” Ohayon says, beaming. “I mean, who gets this excited about ACT prep?”