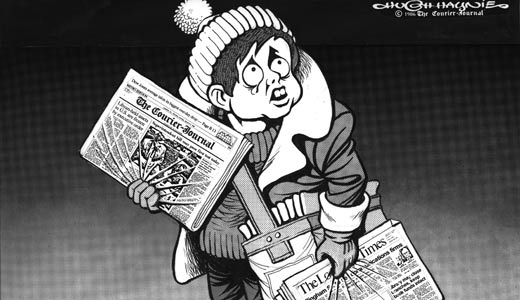 Driving a pale primrose 1966 Jaguar E-Type around town is the opposite of subtle, so Hugh Haynie had to use a decoy whenever he wanted to be discreet. The sports-car enthusiast, who considered himself a gentleman from Virginia and constantly brought flowers and teddy bears to the women around him, bought himself a primer grey ’58 Volkswagen Beetle. The responsibility of getting this undercover car where it needed to be usually fell on his adult son and primary wingman, Smith Haynie. The two were better at being drinking buddies and best friends than maintaining what a family counselor might say is a healthy father-son relationship.

“That’s just the way dad was,” says Smith Haynie, who not once during our three-hour conversation uses the phrase “my dad,” only the unqualified “dad,” as if the man belongs to everyone, or has taken on a mythical status.

Neither is that far a stretch. A generation of Louisvillians grew up on the political cartoons of Hugh Haynie, which appeared six days a week for almost 40 years in the editorial pages of The Courier-Journal, as well as in dozens of newspapers across the country. From the Eisenhower Administration through Clinton’s first term, the news topic of the day was filtered through Haynie’s unique worldview and recorded in newsprint for the community to discuss amongst itself. They included civil rights marches, the Vietnam War, the moon landing, Watergate and the assassination of President Kennedy, who Haynie knew personally. Haynie infamously earned a place on Nixon’s list of enemies of the White House. No topic proved too sacred for the draftsman’s tools.

His most beloved cartoon, which runs in the C-J every Christmas Eve, contrasts an iconic image of Jesus with that of a man surrounded by wrapped presents, holding a long shopping list and contemplating, “Have I forgotten anyone?”

It’s these bold, illustrative graphics that set the foundation for Hugh Haynie’s professional legacy, but for those who knew him, the eccentric and extraordinary man behind the editorial desk was just as interesting as the ink shaped by his fingertips.

Smith Haynie, now a family court judge here in Louisville, describes his father as a “beautiful tornado” with endless artistic talent but zero interest in what he called “the vagaries of life.” Hugh was a man who took his wife on a honeymoon to Washington, D.C., to watch Brown vs. Board of Education argued before the Supreme Court. (She’d loved it.) He never cooked, opting instead to eat all meals at local bars. At said bars, he would only pay with $2 bills because it meant the staff could more easily recognize how much he’d spent there — plus, the newly released bills just interested him. When the family vacationed, he always forgot to pack, which forced everyone to spend the first day of any vacation at the nearest store buying new clothes for him. (For this reason, the Haynies never went on a cruise.)

As this collection of peculiarities spills out, Smith Haynie laughs. He knows how strange they seem, especially when strung together like a laundry list of oddities, but collectively they color the black-and-white cartoons his father was known for. Smith is the first to admit his dad may have been the embodiment of the Seneca quote, “There is no great genius without some touch of madness.”

That touch of madness may have been fueled by a belief that he would die young. Hugh Haynie’s father, a successful Virginia businessman in the menhaden fishing industry, died at 50, and his brother died at 40. “Dad was convinced he would die young,” recalls Smith Haynie. “Maybe that’s why he lived life the way he did.”

Hugh Haynie died at the age of 72 in 1998, two years into his retirement from the newspaper industry and just 10 days after being diagnosed with terminal lung cancer. The doctor told Smith Haynie he must have had a will to die, to die on his own terms while still mentally sharp and active. Quiet, prolonged deterioration wouldn’t have suited Hugh Haynie.

Political cartoonists are trending downward. As newspapers struggle with declining print circulations and monetizing the web, cartoonists are often among the first cut during layoffs. At the same time, the power and prestige of the craft seems to be fading.

Smith Haynie believes his father’s talent and skills would be lost in today’s media climate. When Hugh Haynie first began drawing newspaper cartoons in the ’50s, televisions had three channels and aired only part of the day, making political cartoons still one of the top forms of visual communication for information about the world. Since then, the world’s seen the spawn of a 24-hour news cycle, where quick commentary and surface-level snark too often overrules carefully crafted critiques.

It’s with all this in mind that Smith Haynie and the Frazier History Museum present “Hugh Haynie: The Art of Opinion,” a new exhibit featuring 106 original pieces of artwork spanning across the length of the cartoonist’s career. One-hundred of the pieces are from Smith’s private collection; the remaining six are loaned from local politicians. Hugh was known for giving away his originals without a second thought, sometimes even to readers who sent letters saying they’d liked what they saw in the newspaper.

Smith Haynie worries the exhibit, which opens this week and runs through January, will be the last opportunity the locals who grew up reading his cartoons in the daily newspaper have to see the original work. He hopes the collection might find a permanent home here in the city, though nothing has been worked out yet.

“He influenced a generation,” says Smith Haynie. “He waded into issues with gusto. He loved fighting for the underdog, and he hated the thought of tyranny. He held America to its ideals. He’s too great a talent to be lost to time.”