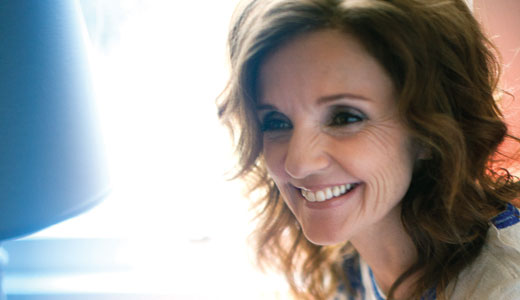 The Ryman Auditorium in Nashville is sacred ground to lovers of country and Americana music. So when a flame-haired singer took the stage of the Mother Church to sing a gospel number three years ago at “Music Saves Mountains,” a benefit concert for the NRDC, a hush swept across the room — except in a middle row of Section 7. There, a beer-guzzling woman refused to be silent. After giving polite admonitions to be quiet, one fellow concertgoer had heard enough. “That’s Patty Griffin,” he said to the offender, pointing at the stage. “She is holy.” The woman turned quiet, but it was too late. She was escorted out by security.

“Holy” might be overstating the case, but to fans, Griffin occupies a spiritual territory that is rare in modern music, having produced seven albums of songs that bare emotional truths without pretension or manipulation. That authority is evident on American Kid, her first studio album of original material in six years, which has garnered widespread critical praise since its release this spring. The record tells the story of her father, the son of Irish immigrants who went on to serve in World War II and lived for a time in a Trappist monastery before becoming a high school science teacher and helping to raise seven children.

Griffin wrote the record during her father’s final illness, and she credits the songs that emerged with grounding her during that painful season. “I think I was preparing myself to lose him in writing a lot of it,” she says, “and just thinking about who he was and what he was to me … and trying to get to know him. He didn’t really have a lot of his faculties about him at the end. I had to sort out what I knew about him and write about him from an almost fictional point of view.”

On “Not a Bad Man,” the song she calls the album’s centerpiece, Griffin sings of her father as a stranger, haunted by ghosts from the war he can’t get out of his head, even with medication and booze. His life serves as a stand-in for many of his generation and background, she says, “that sort of lost American, person-without-a-culture kind of feeling.”

Such a theme called for a specific kind of sound. “I wanted to keep it as basic as possible,” she explains, describing how she brought in Luther and Cody Dickinson of the hard-driving North Mississippi Allstars, instructing them to unplug their amps and strip down to basics. Rounding out the team as Griffin’s co-producer was her longtime friend Craig Ross. From these three collaborators, Griffin extracted what she calls an “ethereal kind of sound.”

This straightforward approach is the perfect complement to songs like “Wild Old Dog,” which depicts God as a cast-off stray. Griffin was inspired to write the song on a drive from Nashville to her home in Austin. “The sun was just beginning to go down,” she recalls, “and I saw this brown dog just going down the median strip … running really, really fast, and it just looked really powerful and beautiful.” Shortly before, a friend from Alabama had rescued a dog, one of two puppies that had been found abandoned in a garbage bag on the side of the road. “I wondered if that was one of those dogs … and so I just built a little story around it.”

Telling such stories is what Griffin has done throughout her career, which began when she was signed to the major label A&M Records, releasing her acclaimed debut Living with Ghosts in 1996. But by the time she was ready to release her third album, Silver Bell, in 2000, a corporate merger had swallowed A&M and a new chief had little patience for fledgling artists. To Griffin’s dismay, the record was shelved but went on to achieve underground popularity in bootleg form. After 13 years, a remixed version was released this month. “It’s a lot better than I thought it was,” Griffin laughs, recalling how the label had informed her that the record was no good. “There’s a lot of it that I’m proud of, and I’m glad it’s coming out.”