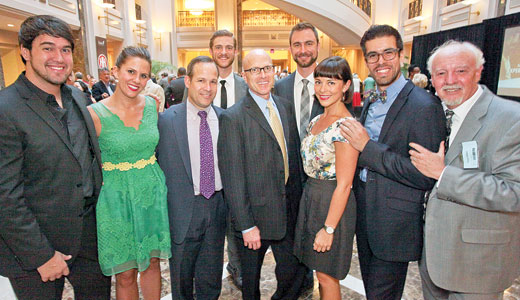 “La Boheme” — the Bohemians — is a band of young friends and artists living the carefree Bohemian life of 19th-century Paris. Penniless but happy. Easy to fall in love. Too young for tragedy. And Kentucky Opera director David Roth says the cast he’s rounded up to present the Puccini classic Friday and Sunday in the Brown Theatre is as wonderfully attractive as the characters they portray. A glittering cast of promising young singers, with the looks to match their talents.

Except for one. “Yeah, you’ll notice he isn’t holding up any pictures of me,” laughs Tony Dillon, the deep-voiced baritone/bass, who sings the dual roles of Benoit and Alcindoro. Compared to his 20-something castmates, Dillon’s characters are more … well, more like your dad.

But that works well for the production. The younger roles are filled by budding young performers singing “La Boheme” for the first time in their professional careers — much as their characters are coming of age in Paris. Dillon, on the other hand, says the two performances he’ll give here this weekend mark the 12th and 13th times he’s sung “La Boheme” this season, and the 75th of his career. A steady hand for a youthful cast.

Early in the opera, Dillon’s Benoit, the landlord, is put off for the rent by the fast-talking lads, with a volley of excuses that leaves poor Benoit sputtering, “but … but.”

“Benoit is pretty much interjections. You don’t get any long, beautiful phrases,” says Dillon. “But I can help with the timing. If they get off just a little, I’m always going to be coming in to get them back on.”

“Tony is such a stage hound,” says Roth. “He immediately picks up on the energy of the cast the moment he’s plopped down in the room on the first day of rehearsals.”

And he adds an element of authenticity, says Roth. “What we’re doing with these young artists is mirroring the young artists of the opera, the young Bohemians living in Paris — with Tony as the two older gentlemen. These are artists in the making, and then you have the veteran, a true actor, who is always there.”

Timing is of utmost importance for Puccini, helping the composer convey his stories realistically. “La Boheme” premiered in Turin in 1896 and in New York in 1899 — arriving in an age of realism as the world plunged into the 20th century.

All that is nicely displayed in a street-side café scene in the second act. Here Dillon is onto his second role, singing Alcindoro — a rich older guy with his heart set on young Muzetta. Of course, Muzetta is more interested in her ex-boyfriend Marcelo, while Mimi is swooning for Rodolfo, and so on.

“You don’t get any pauses,” says Dillon. “The servers come in with a bottle of champagne, the cork is popped at exactly the moment it’s supposed to be. A glass is placed on the table. I’m taking my gloves off, and the waiter shows up at just the right moment.”

Action timed to the second. “Some of it is actually in the score,” Dillon says. “But it is all choreographed by the director, and each new production is different, which is good. You can’t make it old hat. You want to keep it alive and fresh every time you do it.”

Of course, one thing never changes: Dillon’s Alcindoro always gets stuck with the check.