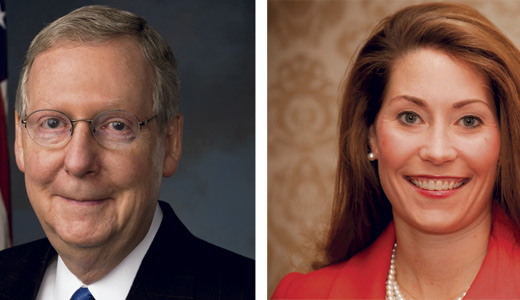 With Secretary of State Alison Lundergan Grimes’ announcement last week that she will challenge Sen. Mitch McConnell for his seat next year — in what could be the highest profile and most expensive race in the country — the impending 16 months of political carnage kicked off with 24 hours that were more strange than nasty.

Grimes’ highly unusual announcement — after just deciding to run minutes earlier — was widely mocked by critics and supporters alike, as the campaign had no website set up to take donations for another four days.

McConnell’s campaign then swung wildly at Grimes with one of the most bizarre ads ever produced by a major party candidate, an incomprehensible song using Grimes’ Auto-Tuned voice. While the ad attempted to mock her, most viewing it wondered whether prankster teenagers had hacked his campaign’s YouTube account.

But these early miscues were mostly inside baseball for the political elites, as most Kentucky voters care little about campaign rollouts or silly Auto-Tune videos. Instead, they’ll soon take a hard look at the candidates — with the help of more than $50 million in attack ads.

Here’s a preview of the key questions from the coming campaign that will determine if McConnell continues his golden years in the U.S. Senate, or if Grimes can pull off a foundation-shaking upset.

Who can hate D.C. the most?
Even before Grimes’ announcement, McConnell and his allied Super PAC were pounding away with ads painting her as a puppet of President Obama — unpopular and twice blown out in Kentucky — who would support his so-called “War on Coal.”

But polls show that McConnell’s approval ratings aren’t much better, and Grimes previewed her jujitsu move at her announcement, saying, “We cannot change who our president is. But we can change who we have in Washington representing Kentucky.”

While Grimes strategically creates distance between herself and Obama, she’ll try to tie McConnell to one of the least favorite entities in America: Congress, with its near-single-digit approval rating.

McConnell will certainly tout his experience and power, but look for Grimes’ attempt to flip this around and characterize him as part of the problem in Washington, a hyper-partisan obstructionist too busy playing power games to work for bipartisan solutions, losing touch with Kentuckians after nearly 30 years in the belly of the beast.

Best friend of coal?
Grimes’ task of labeling McConnell an “obstructionist” will be trickier when it comes to environmental policy. A longtime favorite of coal industry CEOs, McConnell has obsessively blocked clean energy legislation and piggybacked on the industry’s “War on Coal” PR campaign against the EPA.

While Grimes hasn’t publicly addressed Obama’s energy and environmental policies yet, many observers expect her to mimic Republican criticism of them and model herself after Democratic Sen. Joe Manchin of West Virginia — who famously shot a copy of Obama’s cap and trade bill in a TV ad — and Kentucky Gov. Steve Beshear — who neutralized the issue in his reelection campaign with aggressive anti-EPA rhetoric.

Despite receiving significant support from the industry in her 2011 race, neutralizing the issue will be easier said than done. The coal industry may unanimously support McConnell no matter what Grimes advocates, just as former Rep. Ben Chandler learned the hard way in his loss last year.

If Grimes tries to “out-coal” McConnell, she may distance herself from Obama enough to pick up support in Eastern and Western Kentucky, but she also faces the chance of alienating environmentalists who support EPA regulations, hurting her ability to unify her Democratic base of support.

What policy rhymes with Grimes?
Part of the appeal for Democrats in recruiting Grimes as a candidate — and notable difficulty in McConnell’s ability to attack her so far — is that she is mostly a blank slate when it comes to public votes and stances on policy, such as coal. But as Grimes’ campaign begins its “official” rollout later this month, with intense media scrutiny to come, her positions will no longer be a secret.

If Grimes comes out in support of the Affordable Care Act, McConnell will no doubt use “Obamacare” as one of his most reliable attacks. The effectiveness for either candidate on this issue will largely depend on Kentuckians’ reaction to it next year as ACA goes into nearly full implementation.

Grimes and Democrats have already begun to play offence on women’s issues, attacking McConnell for his votes against the Violence Against Women Act and equal-pay laws, as well as tying him to extreme statements from some in his party.

While it’s yet to be seen if there is a clear contrast on foreign policy, privacy issues, taxes and spending, McConnell seems likely to use social issues such as gay marriage and reproductive rights if Grimes takes a progressive stand.

Attack from right flank?
Though Grimes will have a number of Democratic primary challengers, there is little chance they will have the money or support to compete with her. McConnell, on the other hand, still faces a large amount of distrust from the Tea Party over a long list of issues, including his proud support of the 2008 bank bailout and surveillance laws like the Patriot Act.

While no viable Tea Party challenger has stepped into the race, former Rand Paul campaign manager David Adams says he has successfully recruited a candidate, which he will reveal soon. Such a candidate would certainly be a long-shot win in the primary but could gain enough attention and support through next May to alter McConnell’s preferred message.

In particular, the Tea Party could interfere with McConnell’s strategy to tout his “influence” for Kentucky, which he used liberally in 2008 to highlight the many federal pork projects he brought home. After bragging about a $38 million earmark he delivered to a Louisville park at a press conference last week, Adams pounced on McConnell as part of the free-spending cabal that drove up the federal debt.

However, McConnell’s ace in the hole with the Tea Party is the strong alliance he has forged with Sen. Rand Paul over the past few years. With Paul’s support — and silence on the many issues where they strongly disagree — such Tea Party defection will surely be muted a great deal.