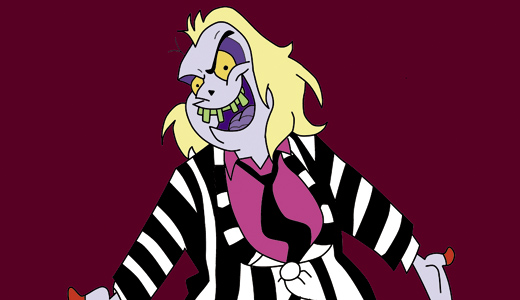 While the 1988 feature film starring Michael Keaton, Alec Baldwin and Geena Davis was a major hoot, this animated series was just as good, surviving for four seasons, 1989-1991. Only two characters from the film made it to cartoonland (or “Neitherworld,” as it’s called here), the obnoxious spirit Beetlejuice and his living best friend Lydia, voiced by Stephen Ouimette from the “X-Men” TV series, and Alyson Court (“Claire” in the “Resident Evil” video games). Part of your haunted childhood: 94 eekie episodes on 12 spirited discs.

A powerhouse season of Britain’s greatest master sleuth, solving murders most foul in England’s late-’60s North country. Martin Shaw is simply incredible as the detective, a WWII vet who scolds and taunts and teaches sidekick Detective Sergeant John Bacchus (Lee Igleby, driver of the Knight Bus in the “Harry Potter” movies) the finer points of catching a killer hiding in plain sight. Let it be said that the world of George Gently is anything but gentle; the man is absolutely ruthless, the smartest guy in the room, and not afraid to cut you off at the knees if need be. Yet he remains always in control, especially around his eager young charge. Four big episodes plus never-before-seen bonus goodies. This thing RAWKS!

A HAUNTING AT SILVER FALLS

Beautiful Alix Elizabeth Gitter (“GCB,” “Blue Lagoon: The Awakening”) must solve the mystery of a pair of twin ghosts haunting her newly adopted town. When she discovers that their father was wrongly convicted of murder (not a spoiler), she sets out to uncover the real killer — who is more than willing to kill again to keep his secret — while the rest of the town just wants it all kept quiet. A good, solid little indie; worth your time.

A solid dramatic wrinkle to the stale, formulaic modern vampire movie: Irina the bloodsucker is dying. After a century of life as a reluctant predator, her body has reached its end, and her living hell will soon be painfully over. Her only “friends” — her motel manager/protector and a weary prostitute — seem to be in an even more decrepit state, rotting away from the inside in their own ways. Not exactly the feel-good romp of the year, but a welcome new adult take on a trivialized genre.

The 50th Anniversary Blu-ray release of The Film That Destroyed Hollywood. When the egos of Elizabeth Taylor, Richard Burton and Rex Harrison merged into one superego, the resulting explosion sent the budget, the studio and the entire “star system” on one gigantic belly-flop down the Nile. Never again would movies be made by “talent”: A pharaoh’s army of soulless bean counters took over the studios, forcing filmmakers to serve as impotent pawns in a corporate stock-game that continues to this day. And what of the movie itself? It’s more grandiose and full of ham than you can imagine, but it is also damn entertaining. Recommended.

While there must be a thousand PG-13 “family home invaded by supernatural forces” movies coming out this week, only one of them features Keri “Felicity” Russell as the mom and the likes of Annie “Tribute 9” Thurman (“Hunger Games”) in the kids’ roles. The cast is excellent as they bounce through this run-of-the-mill spooker, which uses its suburban setting to great effect and has enough gotcha moments to keep its young audience squealing to the end.

As the town recluse, Brad Dourif steals the show from young stars Spencer Daniels (“Star Trek”) and downright edible Alexia Fast (“Jack Reacher”) in this spooky mystery-thriller. Spencer moves to the “backwoods of Kentucky” — which is pretty much anywhere — where he first spies Alexia and shortly thereafter spies rotting corpses hanging from the trees! Sounds like Shively. To say more would spoil it; worth your time.

Having a bad day, Bunky? Want to literally raise hell on the world around you? Well, for this bargain price, you can learn to invoke Solomon’s Lemegeton Magick, cause angels and spirits to appear visibly within your Magick Circle — including both Bael and Astaroth, if they’re not busy — and wield the death-dealing powers of the ancients, right in your own rec-room. An actual how-to course, plus a visit to The Order of the Temple of Astarte where “remarkable phenomena” are witnessed. More than four hours of devilish fun!

A long-overdue doc on the husband and wife whose love broke the back of institutionalized hatred in 1960s America. Virginians Richard and Mildred Loving, a white man and a black/Cherokee woman, were married in 1958 in D.C. because such a marriage was illegal in Virginia and 20 other states. When they arrived home, the cops were waiting, charging them with “miscegenation,” a felony, throwing both in prison. It took a pair of young ACLU lawyers and the Supreme Court almost nine years to clear them and declare such laws unconstitutional. Don’t miss this.

John Cusack is great as always — if a little out of his element — in this spy actioner. He plays an agent trying to rebuild a shattered career when a seemingly simple assignment, to watch over a breathtaking code-master (Malin Akerman, Alex from TV’s “Suburgatory”), explodes into an armed siege. Not the best movie ever made, but the attractive cast and lively plot make for an entertaining night on the couch.

The Little Show That Could keeps chugging along — about to be resurrected as a Netflix series, with a movie supposedly in the pipeline — now available in a nicely featured “complete” (so far) set. Jason Bateman stars as the only somewhat sane member of a wealthy family whose patriarch (Jeffrey Tambor) winds up in prison, leaving them all penniless. But rather than a straight-up sitcom, this eschews the laugh track for a hand-held “you are there” mockumentary approach that has been both hailed and blasted by fans and critics alike. Producer Ron Howard is the real wizard behind the curtain, leading Jessica Walter, Michael Cera, Will Arnett, Portia de Rossi, David Cross and a host of others down the rabbit hole in a SoCal Oz that’s too funny to be fiction. Includes the never-aired pilot.

Aka “The Medic,” this lower-budgeted homage to “Battlefield: Los Angeles,” about a chopper-load of Canadians crashed behind alien enemy lines, is a lot of fun. Kevin Johnson plays the lead, whom fate has made protector of a mysterious “package” that may or may not be useful in Earth’s survival. But this guy’s no a hero; he just wants to get back home to his wife. Check it out.