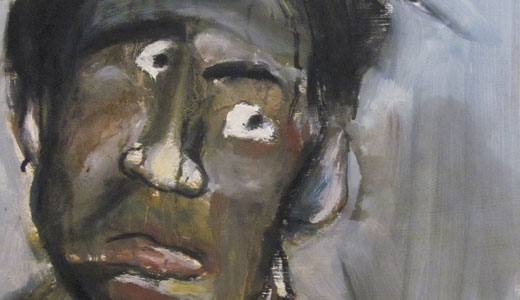 We all know the names Timothy McVeigh and Adam Lanza, but how many of us can name the 9/11 hijackers? How many of us know what they look like — the 19 men whose acts of violence caused the loss of so many American lives, the strongest economy in the world to stutter, and launched us into two wars? Painter Daniel Pfalzgraf has filled that iconographic void with his new body of work, “Blindly Following History,” now on display at Swanson Contemporary.

The title is both a hybrid of concept and technique. Pfalzgraf uses a technique known as “blind drawing” for the charcoal basis of his paintings, in which he does not look at the drawing until it is fully executed, instead keeping his eyes trained on reference photographs. It’s a technique taught in most drawing classes as a warm up, but as scaffolding on which to lay a finished composition, it results in a kind of melting distortion of facial features. Pfalzgraf then works with used motor oil from his pickup truck as a medium to mix his paint with, resulting in an earthy tonality to the simple compositions. The finished products are straightforward portraits of the men for whom distortions define their perceptions and depictions.

For Pfalzgraf, “Blindly Following History” also reflects the connection between this body of work to his show three years ago at the same gallery, “Oil and Water Don’t Mix.” He draws a parallel between the 9/11 hijackers and himself in that they are both following something they know and continuing without questioning. Pfalzgraf straddles the fine line of depicting these men as human, thereby reinforcing his ideas about the banality of evil, and also as figures distorted — either by our perception or theirs. Pfalzgraf also pulls the lens out further to connect his actions and those of the hijackers together with anyone who blindly follows the dictates of their culture, history, cliques.

Pfalzgraf began working on these paintings for the “In the Course of Human Events” exhibit at the Louisville Visual Arts Association on the 10-year anniversary of 9/11. During the course of his initial research, he was shocked to find that in light of the tremendous historical impact these men had made on the early 21st century, the only images available of them were their driver’s license photos.

The surfaces of the works have the depth of luminosity from the glossy quality the motor oil introduces into the paint. The faces, due to the distortions, seem at turns comical, monstrous and vulnerable. Looking around the gallery, I could not figure out how I felt, studying in detail the images of these men whose legacy had affected so many of us. It’s complicated, as it should be. There is no overt tone of depiction, which is refreshing, and it reinforces that Pfalzgraf is a painter, not an ideologue.

“What they did was a horrible, terrible act,” Pfalzgraf says. “But I think we have to realize that we all have a little bit of these things in us that would give us the ability to commit grand acts against our fellow humans in the name of blindly following some dogma instead of stepping back to see what it is we are actually doing to ourselves.”