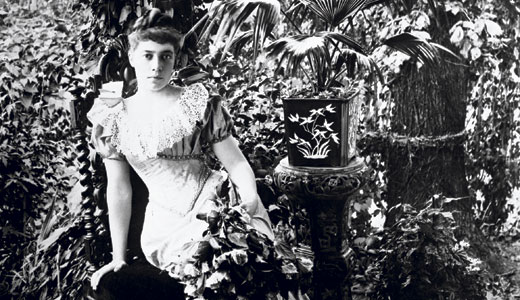 Alice Austen broke two major rules — the first, less scandalous but certainly frowned upon, she was a female photographer at the turn of the 20th century. Second, the Staten Island native was a lesbian; her partner of 50 years was dance teacher Gertrude Tate. She picked up her uncle Oswald’s camera when she was 10 years old, learned how to develop her own photographs, and would spend her life ditching the Victorian norms and allowing us to see her world through her work.

Her name may not be so familiar, though, other than for people with a passion for photography or history. New York playwright Robin Rice Lichtig was on a hike in Staten Island when she first became interested in Austen’s story.

“I was an artist before I started writing plays — a printmaker, and I did photography, among other things,” Lichtig explains. “I just loved her house. The spirit grabbed you, just grabbed you. So I read about her and got interested.”

She brings Austen’s story to the stage with “Alice in Black and White,” which had two staged readings in its development — one at the Alice Austen House, and one at the Great Plains Theatre Conference in Omaha where it won the StageWrite Women’s Theatre Initiative Award. Lichtig sought out Louisville’s Looking for Lilith Theatre Company for the world premiere, which opens this week as LFL’s annual Women’s History Month production, directed by Kathi E.B. Ellis. Lichtig had seen LFL’s production of “Fabric, Flames, and Fervor: Girls of the Triangle” in 2009 and says the group was a good fit for her work.

“The first thing is the movement,” she says. “I want most of my plays to have exactly the kind of movement that (LFL) does. Maybe it’s because I used to be an actor, I see light and sound and movement — and in this play, cameras — as characters in the play, besides just the people. It just lifts it off the page and becomes really exciting. And then, of course, the fact that I obviously saw they do good work, and the collaborative aspect, too.”

Most of LFL’s productions are conceived, researched and written by members of the ensemble, and Lichtig likes to work with companies producing her plays when she can, so she’s been in town working with the group. Also, for the first time, an LFL production has two men in the cast.

“It’s been a part of our aesthetic for years where we show all of humanity through the vehicle of the female actor,” says Shannon Woolley Allison, LFL artistic director. “But I cannot imagine anything more perfect than Ted (Lesley) and Joe (Hatfield) as part of this ensemble and this collaborative process.”

Lichtig will hold discussions with the audience, and the Paul Paletti Gallery downtown will exhibit prints of Austen’s photography during the run of the show.