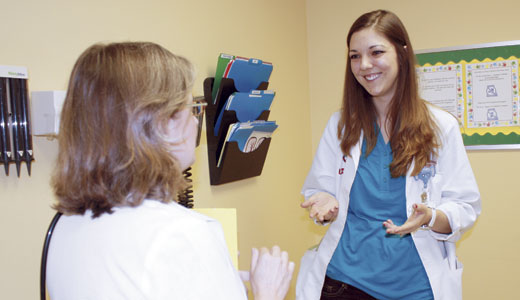 Dr. Michelle Parchman, a tall, chipper brunette, strides across Jackson Street on a cold, overcast November morning, parking herself underneath a bus shelter. From beneath the 27-year-old’s gold-hued winter coat, a white medical jacket fans out, its pockets packed with a stethoscope and a wad of stickers for little ones she’ll encounter at the Iroquois Family Health Center.

A second-year general pediatrics resident at University of Louisville, she pulls out an orange post-it note.

“We’re waiting for No. 18!” Parchman proudly proclaims. This is her first time navigating TARC. And the first time she’s ever ridden a bus.

“We’ll see how you do,” says her supervisor, attending physician Dr. Faye Jones, who’s bundled up in a puffy, dark coat. “We can’t help you.”

Parchman’s bus trip to the south Louisville clinic that serves many low-income, non-English speaking families is part of a new rotation the University of Louisville Department of Pediatrics is offering to residents. It’s called “Poverty and Social Justice in Children’s Health.”

The month-long rotation delves into the social aspect of health care, exposing residents to the realities of poverty, food insecurity and housing instability. Studies indicate that these stresses are often associated with higher rates of behavioral, developmental and learning problems in children, as well as a greater likelihood of asthma.

Residents must tackle public transportation to better understand the daily routine of many of their patients.

The No. 18 bus belches and hisses as Parchman and Jones climb aboard.

Parchman’s only the second resident to sign up for the rotation that started over the summer. She’s visited the Wayside Christian Mission and several low-income and free clinics. One evening, she was tasked with plotting grocery stores in Louisville’s urban, low-income neighborhoods, only to find countless convenience stores with meager produce sections.

“(It’s) making me aware of facilities that are here, especially because I’m not from here,” says Parchman, an Alabama native.

Dr. Bill Allen, a pediatrician and assistant professor of pediatrics, created the poverty and social justice rotation. He hopes to round out the technical, scientific side of training during the three-year residency period in which newly minted physicians hone in on a specialty.

Parchman steps off the bus to make a transfer across the street from the Hall of Justice. As part of her rotation, she recently headed inside the boxy building to watch eviction court. Much to her surprise, a family she’s treated was there facing eviction. Every week, Parchman sees patients at a U of L downtown clinic that serves largely low-income clientele. The encounter sparked a realization: Even with routine questions, patients likely carry a host of burdensome unknowns.

“We ask, ‘Who all lives at home with you? Do you have any pets? Does anyone smoke?’” she says. “I’ve never asked, ‘Do you have a home?’ That was just shocking to me.”

As Parchman and her supervisor, Dr. Faye Jones, jog in place and stuff hands into pockets, trying to stay warm while awaiting the next bus, Jones listens and nods as Parchman recounts some of what she’s experienced.

“It opens your eyes to what’s really out there, what people are facing,” Jones says. “Because unless you’ve lived through it yourself, you kind of have no idea what people are going through just to make it to the clinic.”

To that, Parchman replies, “I’m just imagining having three kids trying to get onto the bus, (and them) running around.”

She describes her middle-class Huntsville upbringing as living in a “bubble.” Many medical students might echo that sentiment. A 2010 article in the medical journal “Medical Teacher” found that the percentage of medical students who come from families with incomes of more than $92,000 varies between 48 and 57 percent. Meanwhile, the percentage of students from families who earned less than roughly $19,000 has never been greater than 5.5 percent.

Across the country, medical schools and teaching hospitals have embraced the notion of incorporating social health into curriculum. For instance, at Vanderbilt’s School of Medicine, students take on a weeklong challenge, eating on the amount of money the average person receiving food stamps might receive. Georgetown University’s School of Medicine offers a social justice and advocacy course for fourth-year students.

Dr. Joanne Conroy, the chief medical education officer with the Association of American Medical Colleges (AAMC), says the importance of recognizing social health stresses surged around 2008. In part, the poor economy and changing American population placed greater weight on the issue. But Conroy also says this generation of future doctors has voiced an interest in international health and social justice. (According to the journal “Annals of Internal Medicine,” studies have shown that racial and ethnic minorities often receive lower-quality health care than white patients.)

“I think the students are changing,” Conroy says. “They’re coming to us with a different vision of what they can do. They’re far more global than students were years ago.”

Several organizations, including the AAMC, The Society of General Internal Medicine, and the Institute of Medicine, have issued reports on why and how behavioral and social science should be included in the training of future doctors.

Parchman arrives at the Iroquois Family Health Center at about 8:30, after roughly an hour spent on the bus. She meets with Dr. Julia Richerson, a petite, friendly pediatrician who staffs the clinic.

As a baby’s wails slowly subside down the hall, the two tuck into an exam room and begin to chat about some of the patients who’ve already been treated this morning. A young Haitian boy stopped in. He’s struggling in school, creating some anxiety for his parents, who can’t communicate well with the school district.

“There’s a lot of helping people, coaching people how to advocate for themselves,” advises Richerson, who also emphasizes the need to learn and understand the intricacies of different cultures.

She then mentions a little girl who’s been exposed to drugs at home.

“In that situation, as a pediatrician, make sure that you get the full story,” Richerson says. “You have to take that extra two to 20 minutes to get that full social history.”

Because this rotation isn’t focused so much on medical treatment, Richerson will spend the day reinforcing how listening can greatly help heal kids. But that can be difficult. At the clinic, Parchman has about 15 to 20 minutes to see each patient. She must balance efficiency with delving into sensitive issues, determining whether a social worker or other resources may be needed.

So far, the poverty and social justice in children’s health rotation hasn’t proven wildly popular with residents. The next resident who will partake isn’t signed up until next summer. But U of L officials feel it will catch on over time. Furthermore, they’d like to expand the rotation to nursing students as well as residents focused on specialties outside of pediatrics.

For Parchman, her lifelong dream of becoming a pediatrician remains intact, though the rotation has reshaped how she views it.

“I’ve learned that medicine isn’t even 50 percent medicine,” Parchman says. “There’s so much other stuff going on.”