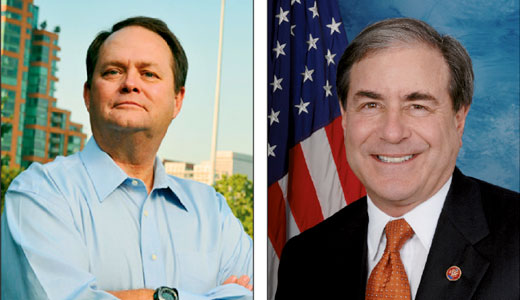 We are not sure when the exact moment came that the Jefferson County Republican Party establishment officially gave up on defeating Congressman John Yarmuth.

However, we are confident that this moment came long before his current long-shot Republican challenger, accountant Brooks Wicker, filed an embarrassingly meager campaign finance report this July showing only $2,600 raised in the second quarter, somehow even less than the $3,000 he had raised in the first.

Speaking at a Young Republicans event a month earlier, Wicker laid out in clear terms the mentality of his party that found futility in challenging Yarmuth.

“I have found in this community, and certain sections of the Republican Party, what I would say is a very defeatist attitude,” Wicker said. “They’re used to losing. They’ve accepted losing.”

In all fairness to Wicker, Republicans’ resignation to a future of domination at the hands of John Yarmuth (founder of LEO Weekly, FYI) and their unwillingness to give Wicker donations has little to do with him.

It would be an exaggeration to say Wicker is even a Team B-quality candidate — he finished fifth in the 2010 GOP primary for this seat — yet in January, he was the only Republican to have bothered filing to challenge Yarmuth.

Even as far back as 2010, the prime year to challenge a Democratic incumbent in a Republican wave election, the best the party could do was offer a handful of long-shot challengers, with eventual nominee Todd Lally losing by double-digits.

Watching Yarmuth coast to victory this year, it’s hard to believe Republican Anne Northup once held this district for five straight terms, before Yarmuth first edged her out in 2006.

Our best guess for when the “defeatist attitude” toward challenging Yarmuth set in was election night in 2008.

Yarmuth — instead of taking the centrist approach of many first-term congressmen following a narrow victory — took hold of a bold strategy when he arrived in Washington: voting his conscience on every issue without regard to polling and conventional wisdom, and making every effort to unapologetically defend those votes.

Northup and Republicans saw blood in the water, setting up a rematch with the Democrat who was obviously far too liberal for what had been such a reliably Republican district.

Yarmuth, the proud liberal — who even voted against Christmas! — thrashed Northup by 19 percent, essentially reshaping the political landscape of the 3rd District and fully breaking the spirit of the Jefferson County Republican Party.

And if you catch most in the Louisville Republican establishment in a candid moment, they’ll admit the same. While they find Yarmuth’s liberal positions abhorrent, there’s a grudging but deep respect for his ability to defend his positions, even in front of a hostile audience, with sincerity and vigor.

Yarmuth may be more liberal than a typical voter in his district, but even his enemies will concede that he means exactly what he says and can be quite persuasive to those in the middle of the partisan divide.

Republicans best hope for a comeback in the Kentucky’s 3rd may lie outside the district, as another two years stuck in the minority of John Boehner’s Congress may frustrate or bore Yarmuth into trying something new.

But there is this McConnell guy running in 2014. That certainly would not be a boring challenge.