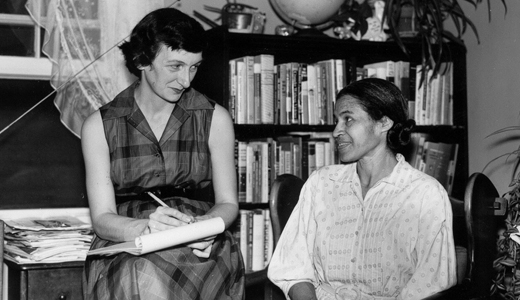 Anne Braden preferred not to talk much about herself. Part of this was modesty, but mostly she was just far too busy devoting time to her tireless life’s mission of civil rights and social justice.

Fortunately for those who did not know Braden, she opened herself up in the last years of her life to detail her amazing journey, from a privileged childhood in the segregated South to a legacy as one of the most important white leaders of the civil rights movement.

Mimi Pickering — who with Ann Lewis directed the Appalshop documentary “Anne Braden: Southern Patriot,” which has its Louisville premier Sunday — says Braden shared her life story with students, historians and the filmmakers in order to make such a path accessible for those who followed her.

“She was seeing that by telling her story, it was really a way to engage new generations and new communities in the history that she had been involved in,” Pickering tells LEO. “That her story could be a lens to these events and help to inspire people to keep on the fight.”

In 2004, Pickering and Lewis began interviewing and filming Braden, who died in 2006 at the age of 81. Though the duo was unable to film as much as they’d hoped, fellow filmmakers generously donated additional Braden interviews, which are supplemented with archival footage from the many social justice movements to which she was devoted.

The result is a film that shows the life of an unapologetic radical activist in an ugly time and place in American history — someone who sought to make those with privilege confront injustice around them, regardless of whether they wanted to hear such uncomfortable truths.

Anne Braden moved from Alabama — where she was raised and later worked as a newspaper reporter — to Louisville in 1947, hoping to escape the ugly segregation and racial hatred of the South. But what she found in Louisville was not much better, with segregated housing and some hospitals not taking black patients.

After she and her husband Carl, a fellow journalist and activist, immersed themselves in the labor and desegregation movement, the events of 1954 made them national figures — or from the perspective of the U.S. government and many whites in the South, dangerous public enemies.

The Bradens bought a home in a Shively suburb for the family of Andrew and Charlotte Wade, African-Americans who had been unable to purchase a house in the all-white neighborhood. What followed from the Wades’ angry white neighbors were bricks and bullets through their windows, a burning cross on their lawn, and, ultimately, a dynamite explosion that occurred while they were out.

While the bombers were never caught, the Bradens and five of their white friends were charged with sedition. In the era of McCarthyism and the Red Scare, they were accused of engineering a communist plot to segregate the neighborhood, even planting the bomb, and supposedly “exposed” as owning Russian and Marxist books. Carl Braden was convicted and sentenced to 15 years, and though the Supreme Court exonerated him eight months later, the Bradens were blacklisted for many years.

While Pickering notes that the story of Anne Braden usually ends there, the film delves into the wealth of important work she did over the next 50 years. Braden edited the Southern Patriot, a vital newsletter documenting civil rights struggles, and organized white supporters of the movement under the Southern Conference Education Fund.

One such effort — organizing poor whites in Appalachian Kentucky — earned her a spot on Gov. Louie Nunn’s platform (to run her out of Kentucky) and yet another wildly unconstitutional arrest and charge of sedition.

Much of the film focuses on her work for racial equality in Louisville, where she lived the rest of her life. Some scenes of protests during the 1975 battles surrounding school integration and busing — with a crowd of white people chanting vile racial slurs — are a shocking reminder of just how contentious the struggle was in this city.

“We were just really honored to be able to tell her story, to know her for the time that we did know her,” Pickering says. “And we just hope that she can provide an example of a role model and inspiration for new generations of organizers, activists and citizens.”