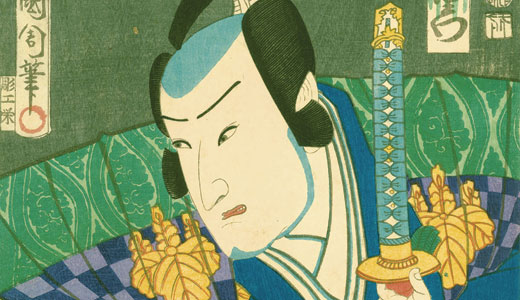 Samurai, as well as shogun, geisha and ninja, are words we Westerners mutter without much understanding of their cultural meaning. It certainly doesn’t help matters that we usually follow them with “Halloween costume,” “make-up” or “turtles.”

The Frazier History Museum’s exhibition “Samurai” can assist in our (mis)understanding of Japanese historical culture. Beautifully laid out, the 3,800-square-foot display area features more than 200 examples of art, clothing and swords covering 1,500 years of history. Although kid-friendly, with hands-on items and interactive stations, there is nary a cartoon character in sight.

“What we think of as Japanese culture today is actually very much driven by what was the samurai way of life,” says Frazier Museum director Madeleine Burnside. “Samurai values influenced fashion, theater, architecture and all aspects of Japanese culture, helping form the very foundation of the Japanese society that we know today.”

The samurai (the word means “to serve”) were highborn warriors, as well versed in weaponry as they were in the arts. Samurai dominated Japanese culture up to the middle of the 19th century. Their rules of dress and behavior according to rank resemble those governing the medieval knights of Europe. The samurai class included women, usually wives or daughters of the warriors, who were also educated in the martial arts. Some samurai were famous as painters and craft artists.

The Japanese excelled at woodblock prints, especially during the Edo period from 1603-1868. Created from complex printmaking techniques in multiple vivid colors, the many excellent examples in the exhibition include a portrait of Otani Tomoemon by the artist Kunichika.

Tea drinking was popular with the samurai. An elaborate ritual evolved that combined the actual act of drinking tea with a calming aesthetic called “Sado” (The Way of Tea). Green tea would be prepared in its own simply decorated room using plain, handcrafted ceramic pots and bowls. Following the ritual enabled the samurai to relax and shut out the dangerous world they lived in. It was a place where swords were not permitted and rank lost its privileges. The show features examples of the simple pottery used in the ceremony as well as a small tearoom.

Also included in the exhibition is the bronze “Way of Horse and Bow,” by Kentucky sculptor Douwe Blumberg. Actor William Shatner recently donated the samurai sculpture to the museum.

“Unique,” “once-in-a-lifetime” and “exclusive” are words that have almost lost their meaning, but this is indeed a show where those words apply. It took the Frazier History Museum, in partnership with the sword-fitting collector group Kokusai Tosogu Kai (KTK), four years to organize the exhibition. Many of the works have not been on public display before. It did not travel here from another museum and will not go on the road after it closes. Blink and it will be gone, with the artifacts returning to their owners in Japan and around the world.