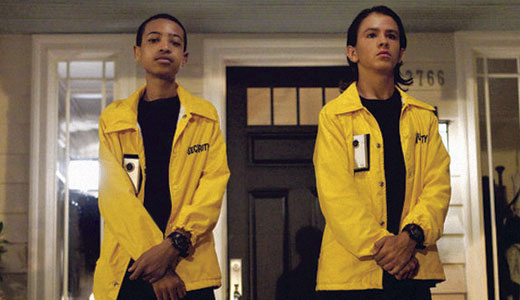 JEFF, WHO LIVES AT HOME

Jason Segel once again plays a slacker/nerd, this time a pot-smoking basement-dwelling man-child, just one of a series of not-entirely-likeable characters that somehow come together to make this a surprisingly fresh and uplifting comedy. With Ed Helms as his asshole brother, the phenomenal Judy Greer as Ed’s promiscuous wife, and irritating Susan Sarandon as the boy’s frustrated mother. Funny, true and surprisingly memorable.

This silly, past-PG-13 high-school “let’s throw the greatest party of all time” flick suffers from that plague known as “found footage syndrome” — the whole thing is supposed to be a mishmash of “real” handheld camera shots depicting a “real” event. It’s over the top and ultimately kinda lame, co-starring a trio of near-unknowns who may get to stay that way. The real stars are all the uncredited Hollywood starlets who get nekkid and dance around the pool, a list that, unfortunately, does not include winsome Kirby Bliss Blanton, formerly of “Hanna Montana.”

A BAG OF HAMMERS

This is a good, solid little indie drama with lots of heart. Jason Ritter and Jake Sandvig play best buds who grew up on the mean streets together and now make their living pretending to be valets in order to steal cars. Their rogue lives come undone when they rescue a neglected 12-year-old boy: In teaching the kid to be a “good” thief, they are forced to re-examine their own lives. Worth your time.

This new TNT series stars Breckin “Robot Chicken” Meyer and “NYPD Blue”’s Mark-Paul Gosselaar as a pair of irreverent lawyers who have built their career on over-the-top stunts. Hired as an experiment by old-school legal powerhouse Malcolm McDowell, they have to find ways to get their clients off without taking the whole company down in the process. Fresh and surprising. Oh, and we have to mention little Dana Davis as their hot, spunky ex-con investigator who steals every scene she enters. The best dumb-lawyer show since “Ally McBeal.”

Documentarian Jennifer Fox spent 20 years filming and interviewing Tibetan Buddhist master Chögyal Namkhai Norbu, one of the West’s great teachers and spiritual leaders. During this time he became a father: His son, Yeshi, was born in Italy and raised with both Eastern and Western values. As an adult, Yeshi has rejected his father’s religion but cannot escape what millions of followers see as his “destiny.” Fascinating stuff.

We loved this silly teen-girl empowerment fantasy. Shy and tongue-tied around boys, Debby Ryan (“The Suite Life on Deck”) has a secret identity: She is “Radio Rebel,” Seattle’s most popular underground DJ! But can her mad skills and rad patter save her from the mean girls — and high school principal — who are on her trail trying to shut her down? Shameless, innocent fun; one of Disney’s better made-for-TV teen efforts.

Local lady Jennifer Carpenter holds her own amidst Nicolas “No Talent” Cage, January Jones and the always overwrought Guy Pearce in this revenge/retribution action-thriller with a clever twist. When the wife (Jones) of a mild-mannered English teacher (Cage) is attacked, he is angry but helpless. Pearce walks in and offers him anonymous revenge: A complete stranger will find and punish the attacker in exchange for a favor to be named later. This lands Cage in a sleazy underworld of vigilantes-for-hire from which he cannot escape. It’s not Shakespeare, but we liked it.

If we tell you that this is a meditation on race, fate and redemption, referencing Homer’s “Odyssey” from a frozen Alaskan nowhere, you’ll skip to the next review. But if you want to know just how powerful and affecting a movie can be, read on. What the film is really “about” is the post-WWII diaspora of Africans throughout the world, the way that they changed it, and the ways they were changed by the experience. But that’s almost an aside to the way the narrative unfolds. It’s as if the film registers somewhere in your subconscious; you won’t be able to think about anything else for days.

OK, right up front: We’re not big fans of Silverman’s brand of comedy. That being said, this series lasted for three seasons on Comedy Central, which says a lot about its fans. Here she plays her favorite character: a petty, self-centered, woman-child who makes life miserable for everyone around her … and yet they all seem to tolerate it. Which always makes us wonder, “Why isn’t someone punching that mouth?” Hmmm. That’s just like real life, isn’t it? Maybe that’s the funny …

This minor hit from Lisa Kudrow of “Friends” started as an online experiment with comedy writer Don Roos and partner Dan Bucatinsky before being picked up by Showtime. Kudrow plays a narcissistic therapist who is sick of whiny patients crying for hours about their damn “feelings” … so she sets up shop to do the whole thing via vid-cam in three minutes. We don’t know anyone else who could pull this off so well. Fun.