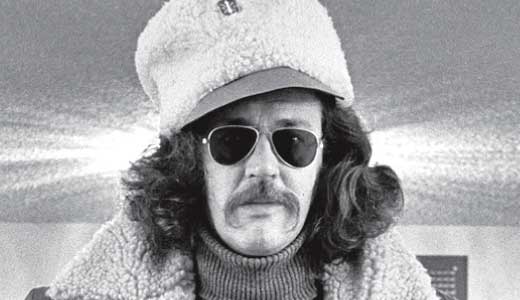 A sign down by the highway reads: Merry Pranksters Welcome Hell’s Angels. Directly across the street from author Ken Kesey’s property, police cruisers hover ominously as swarms of bikers and freaks pass through his gate.

Closer to the house, there is a rapid, concentrated discharge of phantasmagorical light projected into, or rather on to, the woods. Beat poet Allen Ginsberg wanders around chanting and waving, ranting and raving, through the lingering fog of motorcycle exhaust. The recently electrified sounds of Bob Dylan descend from nearby trees where speakers have been strategically mounted.

Copious amounts of beer have been iced down for the esteemed guests and their notoriously unquenchable thirst. An assortment of still legal but utterly mind-blowing substances — what theologians might charitably call entheogens — is also laid out for public consumption by the hosts.

Amidst all this insanity, two Kentucky writers crossed paths for the first time. Hunter S. Thompson’s record of that day in La Honda is brilliant, if horrifying. It appears in his masterwork, “Hell’s Angels,” the very book that made his reputation as a gonzo journalist. Remarkably, Ed McClanahan, the other Kentuckian on-hand, never got around to assembling any text about this particular event.

For most of the tumultuous 1960s, McClanahan enjoyed a stable gig as a visiting lecturer in the English department of Stanford University. He had arrived there in 1962 as part of an extraordinary post-graduate fellowship of creative writers that included Wendell Berry, Larry McMurtry, Robert Stone, Gurney Norman and Ken Kesey.

This was “an exhilarating time to be at Stanford,” McClanahan would later write. “The anti-war movement and the civil rights movement and the Free University movement and the hippie movement and what we might call, in retrospect, the General, All-Purpose Up-Yours Movement were all flourishing, and I was ardently attached to every one.”

Just off campus, over on Perry Lane, Ken Kesey was simultaneously earning his reputation as a first-rate novelist and beginning to, with like-minded friends, “trifle with forces mortal men were never meant to tamper with,” as McClanahan puts it.

This decidedly artsy, intellectual and consciousness-conscious crew comprised the core of what became the Merry Pranksters. It was, in McClanahan’s estimation, “the sweetest, smartest, liveliest, craziest, bad crowd” he’d ever had the good fortune to fall in with. From Perry Lane, Kesey’s adventures in social psychology would inevitably expand down to La Honda and explode into a more subversive approach to not only art, but life itself. A re-fitted, day-glo-doused 1939 Harvester International school bus, with a permanent destination of “Furthur,” and the archetypical wayfaring beatnik Neal Cassady at the wheel, became the symbol and the center of this literary lunatic fringe.

An unexpectedly rag-tag delegation overtakes the contemplative silence of the space where McClanahan has been hanging out. Their leader makes an immediate impression on McClanahan, who notes that he is a “rotund young man with a hairdo like a dust mop dipped in tar coal.” Kesey explains that the man is none other than Jerry Garcia and that his rock ’n’ roll band, the Warlocks, were changing their name and were going to play that very Saturday night at the San Jose Acid Test.

There had been earlier, smaller-scale attempts at Acid Tests, but San Jose would go a long way in elevating Kesey’s elaborate free-form multimedia happenings (whose name aptly referred to the featured refreshments forged from the “private stock” of another Kentucky expatriate — acid guru Owsley Stanley). Even so, McClanahan admits that, at the time, he wasn’t exactly “galvanized with excitement” by this breaking news.

Self-deprecating reflections on this era notwithstanding, McClanahan was, for a teacher and a family man, quite the mover and shaker. He later joked that he industriously “insinuated himself into every sit-in, teach-in, be-in, and love-in” that happened along in those strange days. Importantly, he was also inserting his distinctive voice into the pages of Rolling Stone, Playboy and the Last Supplement to the Whole Earth Catalog. Eventually, McClanahan would publish a good deal of prose based on his personal relationships with such heavies as Kesey, Cassady, the Jefferson Airplane, and the soon to be Grateful Dead. Still, McClanahan’s greatest achievement in making this whole scene famous is not widely known, though it certainly seems, from this remove in time, quite significant.

The Acid Tests have now shifted shape into a much more audacious public display, a three-day Trips Festival produced by Kesey along with Stewart Brand and Bay Area impresario Bill Graham. By the time McClanahan sees fit to arrive, he is “stoned to the eyeballs” and the last evening of the run has already become “one or two or three o’clock in the morning,” hard to say precisely, you see. In any event, most of the crowd has dispersed and the rotund young man’s band is packing up. As if by some strange magic, the Pranksters’ projector has at this very instant frozen a giant image behind the musicians and crewmen. It is, coincidentally enough, McClanahan’s own elongated face. He immediately turns on his heel and splits.

Of late, the Chief — Ken Kesey — has become interested in splitting himself. Having been busted twice in quick succession for possession of marijuana, he is looking for a dignified way to decline a likely five-year sabbatical in the penal system. In the wake of the wildly successful Trips Festival, Kesey convenes his top Prankster advisers and hatches a plan. Then he haphazardly, though not intentionally so, stages his own untimely demise and flees the country.

Before long, however, the half-baked hoax is exposed as Kesey’s “corpse” is humorously reported in the newspapers to have been seen having a great time in Puerto Vallarta and other exotic locales. Thus, Kesey becomes, perhaps, the only best-selling author ever subjected to an FBI manhunt.

For the better part of his Mexican sojourn, by all accounts, Kesey remained paranoid, drug-addled and generally rattled. Yet, taking advantage of whatever clear moments came his way, he compiled a handful of rather inspired letters-on-the-run that were addressed to and intended primarily for friend and fellow writer Larry McMurtry, who was by this time living respectably in Texas. McClanahan confirms that these outrageous outlaw epistles bound for McMurtry were first sent to Kesey’s California-based attorney with specific instructions to have the documents Xeroxed (for Kesey’s personal files) and to also share them with McClanahan, who had long been a trusted sounding board.

As it happens, McClanahan was, for many years, under contract to publisher Farrar, Straus & Giroux, promising them a bucolically Southern, post-World War II novel (that he wouldn’t actually deliver until 1983!). McClanahan recalls that one night while entertaining an editor attached to that project, he ascertained that his dinner companion was also affiliated with a hotshot young journalist from New York.

His old cohort Robert Stone had already been dispatched by Esquire to cover their increasingly infamous writer-in-exile friend, and McClanahan figured that the higher Kesey’s profile as an important part of American culture, the more lenient the courts would be upon his return.

So, with riveting references to Cuckoo’s Nests, LSD-25, Harley-Davidsons, the 1964 World’s Fair, Dean Moriarty, abrupt flight to Mexico, and other similarly Great Notions, McClanahan filled his editor in on the contents of Kesey’s previous few years. Entrusting to him copies of the fugitive’s exhilarating letters, McClanahan implored this bewildered editor to pitch the topic of Kesey and the Pranksters to another rising-star client of his — Tom Wolfe.

But a month went by and nothing came of his proposal for Wolfe. McClanahan was, for good reason, too preoccupied to follow up.

Ken Kesey, ever the piss-cutter, has somehow managed to smuggle himself back across the border into the United States. Whereupon Kesey has commenced to, as he himself put it, “rubbing salt” in J. Edgar Hoover’s wounds with very public appearances and disappearances, all the while using McClanahan’s house as one of his bases of operations. Intrigued by the cache of foreign correspondence and the recent flurry of defiant domestic activity, Wolfe finally picks up the phone and calls McClanahan to arrange a face-to-face meeting with Kesey.

Kesey is fairly receptive to the idea but is already in police custody by the time Wolfe can find his way to California.

On the condition that his own role in the saga be downplayed — McClanahan says that his boss, the inimitable Wallace Stegner, didn’t approve of all that “Counterculture Bullshit” that his visiting lecturer was already knee-deep in — McClanahan agrees to utilize his status as an inner-circle Prankster to help facilitate or, at any rate, initiate Wolfe’s investigation.

It is McClanahan who physically takes Wolfe down to the San Mateo detention center, where an awkward dialogue (through a thick layer of glass) with Kesey can begin.

Soon thereafter, Kesey got out on bail to host the Halloween Acid Test Graduation proclaiming that the time to “go beyond” LSD was nigh.

And the rest, as they say, is history. Or rather, New Journalism. You can read all about it in the resulting classic, “The Electric Kool-Aid Acid Test.” Tom Wolfe’s psychedelic drama chronicles, in living color, most of the Merry Pranksters’ outrageous escapades making certified heroes of Kesey’s crowd. It is, in many minds, the essential read for understanding the 1960s underground.

Even the protagonist, who was known to grumble after its publication that “fame is a wart,” thought it was a “helluva book.” So too did the great Gus Van Sant, whose feature-length film adaptation of “Acid Test” is currently in production.

For all that ensuing hoo-haw (namely Ken Kesey’s truly mythological stature), we have, at least in part, good ole Captain Kentucky (that’s one of McClanahan’s Prankster handles) to thank.

This story was based in part on the writer’s ongoing conversations with Ed McClanahan as well as a review of the author’s previously published works.