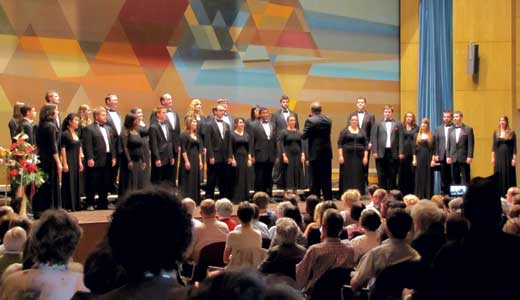 The University of Louisville men’s soccer team started the season ranked No. 1 in the country. And Rick Pitino’s Cards will be in the Top 25 when basketball season rolls around. But those aren’t the only U of L teams sitting high in the rankings. The Cardinal Singers, an elite chamber choir fielded by the university’s School of Music, is ranked third in the world. Perennial top dog Jauniešu Koris Kamer, of Latvia, is No. 1, with the Stellenbosch University Choir, of South Africa, holding second, just ahead of Louisville’s

You didn’t know they ranked singing?

Well, it’s not quite as life-and-death as the Associated Press Poll and Bowl Championship Series rankings that college sports teams — and their fans — live and die by.

“Oh, absolutely not,” says Austin Echols, a bass in the 40-singer group. “The (choral) rankings are only based on competitions sponsored by (choral music organization) Interkultur. There are loads of wonderful choirs, probably some that are much better than we are, that don’t have the funding to go on to these competitions.”

Well, that’s modestly enough said. But the fact is, loads of top choral groups do show up for the big competitions in Europe and Asia, and the Cardinal Singers now rank with the best. This summer, the Cardinals Singers took second place overall in the 12th International Marktoberdorf (Germany) Chamber Choir Competition. (Latvia was the winner.)

The Cardinal Singers is a chamber choir of 40 male and female singers, almost all of whom are choral-music majors. The group has a regular on-campus schedule and also sings regional and national dates during the school year. But come summer, the Cardinal Singers step onto the international stage for events that are something of a hybrid between concert and competition — more like a festival, with as many as 250 choirs vying for trophies and ribbons (and sometimes cash). Singing then becomes very much a team sport.

“Well, we do want to be competitive, but it’s not really about winning a game — though I am a sports nut,” says Kent Hatteberg, the director of the university’s choruses and the driving force behind the Cardinal Singers. “What I am interested in is outstanding technique and emotional delivery of the music.”

There was that moment back in 2004, at the World Choir Olympics in Bremen, Germany, when the Cardinal Singers arrived — raising flag USA above the fray.

“They really played that thing up,” recalls Hatteberg. “At the end of the competition, all the choruses were assembled in a huge, 4,500-seat auditorium for the closing ceremonies. You had to have won something to make the top level, and we had taken a first place in ‘chamber choir.’ All the directors of the 259 choruses were seated on stage, and they began to list off the teams and their scores, leading to the top. They kept reading teams and scores and we hadn’t been called — and I think we all began to realize we had a chance at it. I looked out in the hall to see our kids, but they were off in the far right corner of this huge arena, and I couldn’t really see them.

“As they closed in on the winner,” Hatteberg continues, “they were playing this dramatic Olympic kind of music that kept rising as they neared announcing the winner. Then when we won, we were just shocked. We were asked to come down on stage and sing our country’s national anthem. Singing the ‘Star Spangled Banner’ — I can say it was a riveting moment. It will always be in my memory.”

The zing’s the thing

But just what is it the Cardinal Singers have that lifts them across seas to the top of international competition?

“‘Zing,’” explains soprano Erin Keesy, “is the sound Dr. Hatteberg is always asking us to achieve. He’s looking for a zing that gives the sound special electricity. It has to do with perfect intonation. Chamber choirs don’t tune their voices the way orchestral players tune their instruments. We tune for a ‘pure’ intonation. It’s called Pythagorean Tuning.”

Keesy says the chorus isn’t looking for a harmonic blend. It strives to sing notes so nearly true that overtones are created and many notes emerge from the few being sung.

The zing is also “super clean,” says Keesy. “We sing straight tone, without vibrato. That makes it more of a gripping experience — all so purely blended that it clicks as one unit, locking into tune to get this uplifting quality.”

But if audiences (and readers) don’t have a clue to the acoustics of zing, it doesn’t matter, Keesy laughs. “Whether they know it or not, it makes the sound more enjoyable for the listener.”

And takes the singers to a special level.

“We were singing in Chicago, and while we were there, this truly amazing choir from Latvia (yes, good old No. 1, Latvia) was in town touring,” says Keesy. “We all loaded into cabs and vans and traveled 30 miles across the city to this teeny, tiny Latvian church to hear them sing. It was life-changing to hear them.”

And Latvia isn’t the only life-changer.

“The funny thing,” Keesy says, “is the Cardinal Singers were singing overseas one time in Taiwan, and these kids came up to us at a concert and told us that they’d traveled more than an hour to hear us sing — and they said it was just life-changing. Life-changing for them to hear us sing!”

Traveling Around With Cubans

Hatteberg says the Cardinal Singers were created in 1970 at the request of then-U of L president Woodrow Strickler, who was looking for a special chorus to sing at important university functions and to perform outreach in the community. The founding director was William Lathon, who was succeeded by Shirley Wilkinson in 1991 and Hatteberg in 1995.

“Up to that time,” Hatteberg says, “the group did a lot of spirituals and lighter pop music. I decided to change the focus to become a chamber choir, singing more serious classical choral music — and almost entirely a cappella. Over the years, they’ve developed. I know my vision, and they’ve really bought into it.”

The big break for the Cardinal Singers came when music school benefactor Margaret Comstock created a $1 million endowment for the choral department. That gave the Collegiate Chorale, the school’s primary chorus, and the Cardinal Singers the funds to travel for performances at regional and national music conventions. Hatteberg also lifted his eyes across the pond to Europe, the epicenter of chamber choir competition. Forty singers was the right size for international choir events.

“By 2003, the group had gotten better and better, and I thought we could be competitive internationally,” Hatteberg says. “That summer, we entered the International Johannes Brahms Choir Festival and Competition in Wernigerode, Germany. We got a third in chamber choir and first place in the spiritual category.”

And off they went. In recent summers, the Cardinal Singers have hopped to China, Taiwan, Japan and Korea (where they won $24,000 in the Korea Grand Prix — don’t tell the NCAA). The singers have made a Baltic tour to Sweden, Estonia, Lithuania and Latvia. Last fall, they performed in Tolosa, Spain, and have been invited back. The most exotic locale on this fall’s schedule is Ft. Collins, Colo., in November — in time for the opening of skiing season (if only they had the time).

“When we go to these places, it’s not like we’re in the hotel and then go to the competition,” explains Echols. “We stay with families, maybe two or three of us to each home, and experience their cultures. I think that’s more of it, and the placings become less important.

“We spent the past summer traveling with a choir from Cuba,” Echols adds. “How many people in the United States can say they spent three weeks traveling with a bunch of Cubans, and now have friends living in Havana?”