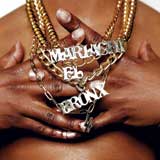 The band is called Mariachi El Bronx, and while its namesake East Coast borough certainly possesses the Latino population and tradition of cultural intermingling that could produce this punk-mariachi hybrid sound, the spirit is undeniably Southern California. Here’s how it happened — in 2006, L.A.-based punk band The Bronx had already released two albums and had the chance to perform an acoustic set on live television. Not content to play acoustic versions of electric songs (in their words: “because that’s never good”), they began to absorb the mariachi influence. And it only makes sense — if you’ve already got an established horn section and interesting rhythms, why not add a guitarrón and some strings? On their second eponymous album, the idea is competently realized, with full, rich orchestration and playful instrumental flourishes. Thanks in part to John Avila (Oingo Boingo) producing and Alfredo Ortiz (Beastie Boys) on percussion, Mariachi El Bronx is a beautiful album in its own right, far beyond any one-trick caballito. It’s a sound baked in the California sun — loose, lively, dance-like and unrepentantly joyful.