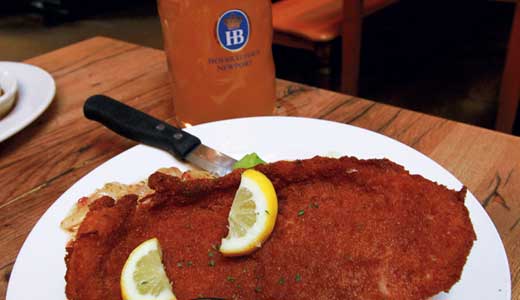 Newport, Ky., is like Cincinnati’s cool cousin — it’s got all the hookups and none of the headaches of big-city life. Just a straight shot up Interstate 71, Newport is a burgeoning river town with a handful of must-visit tourist destinations including the Newport Aquarium and the Hofbrauhaus. It’s even got one of the coolest live music venues in the state — the Southgate House, an old Southern mansion that’s been transformed into a venue akin to our Headliners. And whatever side of the argument you’re on, it should be noted that you can smoke indoors at bars and restaurants here — Christmas for smokers, Black Friday for nons.

I recently made a journey to the Hofbrauhaus in the name of research. Modeled after the infamous bar and restaurant in Munich, Germany, which is more than 400 years old, this location was the first attempt by the company to branch out into the United States. Now there are two other American Hofbrauhauses — in Pittsburgh and Las Vegas.

Basically, you walk into a large beer — or should I say, bier? — hall decorated in traditional German style with rows and rows of picnic tables. A jolly man sits center stage playing everything from Johnny Cash to the “Duck Dance” on accordion. The mood is festive … especially when you get your first sip from the huge-ass mug the Hofbrauhaus is most famous for.

A liter of bier is equivalent to about three bottles … chugging is encouraged so it doesn’t get warm during those last few sips. Actually, I just made that up, but that was my plan of attack. There are five styles of German bier on tap, and it’s brewed according to the Bavarian Beer Purity Law “Reinheitsgebot,” which was enacted in 1516 and limited beer to three ingredients: hops, barley-malt and water.

On my visit, I was only here for the bier, so it was Hofbrau Dunkel for me. The lone dark lager on the menu, Dunkel’s roasted malt flavor also had hints of caramel undertones — think Newcastle or Smithwick’s … but better … and bigger. The other biers available were the Premium Lager, Munich Weizen, Light and this month’s seasonal brew, the German Pilsner. And for all you lightweights, there are smaller sizes available, but I must warn you that half the fun of the Hofbrauhaus is seeing if and how fast you can get down a liter. I was alone on this trip, unfortunately, so I had no one to cheer me on, but I finished in 30 minutes flat. What-what!

I perused the menu between chugs and noticed — shockingly — it’s strictly German fare. Soft pretzels and bier cheese, sauerkraut balls, kartoffelpfannkuchen (potato pancakes) and fritierte gewurz gurken (fried pickles) make up some of the appetizer list, and more traditional foods like bratwursts, various schnitzels and long German names I couldn’t pronounce fill out the rest of the menu. The food smelled good and looked interesting as it was brought out to the tables, but alas, I stuck to a liquid diet — I’m disciplined like that.

Across the street from the Hofbrauhaus is the Newport Levee, which is like the Summit on steroids — restaurants, bars, stores, the aquarium and more. If you’re looking to walk off the bier, I can’t think of a more appropriate place than the Newport Aquarium, where you can touch sharks, ogle at an octopus or chill with the penguins. I didn’t actually go there on this trip (figured I’d fall in one of the tanks and become Dunkel-flavored fish food), but I did stop by a few months ago and saw a lot of fish, snakes, seahorses, poisonous frogs and even an alligator. And throughout the 70 exhibits and 14 galleries, there were five glass tunnels where you are completely surrounded by aquatic creatures of all shapes, sizes and stripes. I had an unfortunate flashback to a scene in “Jaws 3” where the man-eating shark tries to break through the glass, so I made it through those tunnels a lot quicker than everyone else.

But back at the Hofbrauhaus (and halfway through my bier), I got to thinking about Newport and wondered if they had a WHY Louisville-like store with ironic city T-shirts. If they do, I’m sure there’s one that reads: “Newport: Where you can see fish or drink like one.”