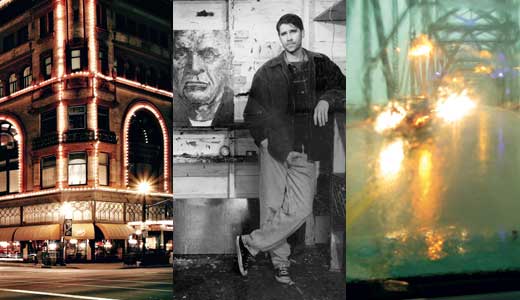 Street lights illuminating Third and Market. A paint-splattered artist in his studio. Memorial Bridge spanning the Ohio River: These are among a collection of images provided by three photographers tasked with capturing a slice of Louisville for LEO Weekly’s third annual Photography Issue.

Through their lenses, the photographers documented some of the people and places that make Louisville a unique, vibrant and creative city.

We hope you enjoy the photo essays that follow. —Sarah Kelley, editor

(Click on the photographers’ names below to view photos …)

It’s been 13 years since Chris Witzke moved from Northern California to Louisville and he’s never looked back. A self-employed commercial photographer for 22 years, Witzke says the city’s distinct seasons, architecture and people make it the ideal place to work and live.

In the mid-1970s, Witzke learned the art of still photography using his father’s camera, ultimately adding motion photography to his portfolio as the industry moved from film to digital. These days, he operates a full-service still and motion photography company, working with local and regional businesses.

The Louisville transplant has this to say about his life’s work: “Photography is about framing a moment. Compressing light, motion and object into an impression. I lose myself in the capturing and find myself in the image. Should a job come up as chief sushi eater and espresso drinker, I might have to think about a career change. Until then, photography is a joy for me.”

In 1988, Geoffrey Carr began photographing artists in their studios at the behest of the Kentucky Museum of Art and Craft — then the Kentucky Art and Craft Foundation. The purpose was to provide artists with portraits to hang alongside their work during exhibitions. When the project lapsed two years later, Carr remained interested in capturing artists in their element, a subject he continues photographing to this day, in addition to working as an award-winning commercial photographer and gallery owner.

As a Jeffersonville resident who works in Louisville, Ted Wathen crosses the Ohio River between two and 10 times a day. This routine journey inspired a photographic undertaking Wathen has been pursuing now for 40 years. “A bridge is a transcendent experience. A metaphor from one place to another,” he says. “With each photograph, with each crossing, I become something new.”

After earning an MFA in photography from the University of Florida, Wathen launched the Kentucky Documentary Photographic Project in 1975, which entailed visiting each of the state’s 120 counties to create a visual record. The Carter administration then tapped him to serve as photographer for the President’s Commission on Coal. As principal photographer for that effort, he documented the living and working conditions of coalminers.

Wathen’s work has been displayed in the International Museum of Photography, the White House, the Speed Museum and numerous local galleries, and has appeared in the Time-Life Photography Series, as well as Fortune, Forbes and Newsweek. Since 1986, he has served as co-founder and partner of the commercial photography firm Quadrant Inc.