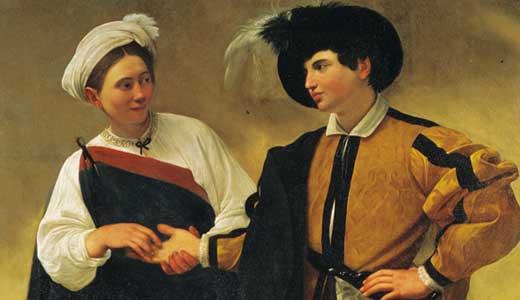 The Fortune Teller by Caravaggio

Aficionados love to gossip about artists’ bad behavior over plastic cups of wine. From Richard Prince’s recent legal troubles to Banksy’s rule-breaking or all the way back to Caravaggio’s colorful exploits at the turn of the 17th century, collectors can’t get enough delinquency. But is there a relationship between art and lawlessness? Or is the bad-boy label forced onto artists?

With a Caravaggio painting on display at the Speed Art Museum, the painter’s scandalous life is now a topic of local conversation. Splitting his time between painting for wealthy cardinals and hanging out with the prostitutes and gypsies who served as his models, Caravaggio depicted ordinary people in biblical scenes and brought reality to exalted stories.

Although he enjoyed patronage during his lifetime, it is during our age of real confessions and saucy memoirs that the paintings and legend of Caravaggio have surged in popularity. His bad-boy image, anti-establishment way of life and a theatrical, almost cinematic painting style have securely established him in the canon.

Perhaps Caravaggio’s personal exploits remain legendary because similar rule-breaking tendencies are seen in contemporary artists today. Street artist and cultural critic Banksy shields his identity to avoid the law. Just as Caravaggio danced between high culture and rebellion, Banksy breaks laws to comment on culture. The many successes his work has enjoyed — from the public exhibition of his graffiti, to the appearance of his paintings in renowned art museums without prior consent, to the installation in Disneyland of an inflatable doll dressed as a Guantánamo Bay detainee — rely on breaking the law.

Also no stranger to legal woes is artist Richard Prince, who lost a recent federal copyright case. Prince, who appropriates photographs for his paintings, was sued by the photographer of his source images, some of which had already been sold for a sum totaling more than $10 million. Because of the ruling, the images of Prince’s “Canal Zone” series are “not lawfully made” and “cannot be lawfully displayed.” With ethics and money at stake, artists, collectors and gallery owners have closely followed this court case.

Of course, graffiti and copyright infringement are different than Caravaggio’s violent life of drunken brawling and an accusation of murder. But our admiration for wayward artists who lead us to question reality with intelligence and imagination remains the same.

But Caravaggio was not just a rascal with a sordid personal history; he was also a committed craftsman who mastered chiaroscuro, a painting technique that creates the illusion of heft and depth by balancing extremes of light and dark. The hyper-realistic effect appeals to modern consumers of photography and video. We like real. We like documentation. And so do contemporary artists like filmmaker Martin Scorsese and video artist Bill Viola, who have both noted Caravaggio as an influence.

Contemporary culture is fascinated with people who wrestle with the ruling class. In many ways, art viewers are responsible for championing the notion of artists as outlaws. We have a ravenous hunger for underdogs, anti-heroes and realistic documentation and, thankfully, Caravaggio’s stunning depictions hit all the right notes. He’s more popular than ever.

It’s unlikely you’ll see a Banksy in Louisville; and after the court hearing, you may never see a re-photo from Prince’s “Canal Zone.” But fortunately, if you like art with a bad-boy story behind it, you can see a Caravaggio (“The Fortune Teller”) at the Speed Art Museum through June 5.