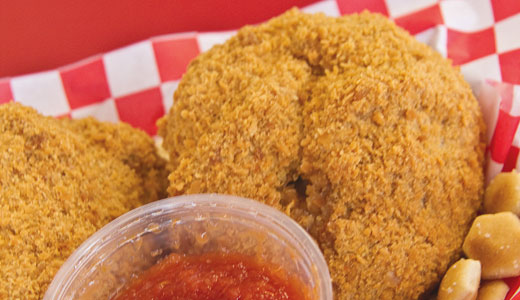 The demise of Flabby’s Schnitzelburg last July, following on the heels of its sibling eatery, Mazzoni’s, which failed in the autumn of 2008 at the ripe old age of 124, seemed to spell the death of a great Louisville culinary tradition — the “rolled” oyster.

This savory confection is a ration of fresh, just-shucked oysters rolled in a white-cornmeal batter the Mazzonis called pastinga, enclosed in a thick cracker-crumb coating, and deep-fried until sizzling hot and mahogany brown. Add spicy horseradish cocktail sauce, and you’ve got a traditional Louisville fried-oyster sandwich.

I’ve been mourning ever since Flabby’s shut its doors, fearing we’d never see the rolled oyster again. It has been often imitated, but rarely duplicated. The Mazzoni family claimed it was an old Italian recipe carried across the Atlantic from their ancestral home in Genoa and held secret by five generations of Mazzonis.

Genoa is famous as the original source of basil pesto and as the birthplace of Christopher Columbus. But oysters? Not so much. These tasty bivalves are common in the cold Atlantic waters off France, but less so in the Mediterranean around Italy. Also, the Italians don’t do much batter-coating and deep-frying. In fact, most of the “Italian” oyster recipes I’ve enjoyed have been Italian-American.

So imagine my delight when I got a call the other day from Bob Kiper, a Louisville food-industry veteran whose latest venture, with his daughter Kathy Kiper Scannell, is the growing local chain of Home Run Burgers & Fries shops.

Although I know Bob as a burger man, it turns out he comes from a fishy background, having been involved in the old Cape Codder chain and its successor, Hungry Pelican.

Back in the day, the Pelican offered perhaps the best of Mazzoni’s many rolled-oyster imitators, and with a now-it-can-be-told smile, Kiper admitted to having persuaded one of Mazzoni’s skilled oyster rollers to give him a few tips back when the restaurants were friendly competitors.

Now that Mazzoni’s and Flabby’s are gone, Kiper decided to resurrect his old version, at least as an occasional special when quality oysters are available, at Home Run.

Makes sense to me! Mary and I hustled over to Home Run’s St. Matthews branch and bibbed up for a nostalgia trip. “A Rare Louisville Specialty Is Back!” the menu declared. “A rolled oyster is a fist-sized ball of crushed cracker dough with oysters in the middle. Made with fresh oysters and fried to order.” No mention of secret pastinga, but the price was an inviting $2.99, almost a dollar off the $3.90 toll for a Flabby’s version.

I’ve got to give Bob and Kathy credit: Their version comes mighty close to the original. On flavor and texture, it’s right on. Maybe a little flatter than a sphere, and fried more golden than brown, but I wouldn’t mark points off for that.

We munched right through two each and particularly admired the sweet, fresh oysters and the textural contrast of crunchy exterior and steamy, moist interior, just like the ones Mazzoni’s made.