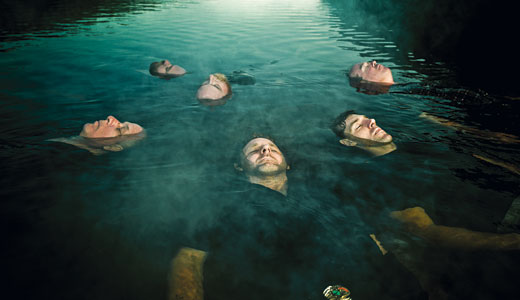 Playing in the moment is as important as technique for Railroad Earth. The group, which celebrates its 10-year anniversary in May, released its latest, self-titled studio album in October. They stop Friday at Headliners, where, as mandolin player and John Skehan says, anything goes.

LEO: What was it like working with producers Angelo Montrone and Michael Caplan?

John Skehan: We took a really a complete studio approach. Angelo wanted it to go as a production piece. Once we actually got into the studio, Cary, Todd and Andrew built everything from there on up. The rest of the string guys, we came in at the end of the process. It’s different, considering our last studio album.

LEO: Many roots groups are content with sounding good without emphasizing true innovation. How does Railroad Earth keep its music fresh?

JS: We try to keep challenging ourselves. There’s a large element of improvisation, and that’s best represented in the (11-minute) song, “Spring-Heeled Jack.” Much of the repertoire changes as we develop onstage, and our actions are completely open from night to night.

LEO: The record touches on Civil War soldiers, Indian chiefs and subject matter in that vein. What inspired the band to cover those topics?

JS: Those ideas come from (singer and acoustic guitarist) Todd (Shaeffer), who’s doing the lion’s share of the songwriting on this record in particular. He draws inspiration from a variety of sources, and one of them is literature. Some of the lyrics on “Black Elk Speaks” are (written by) Black Elk himself.

LEO: As a mandolin player, you’ve performed at Celtic festivals, which celebrate a more traditional style of music, as well as contemporary events like Bonnaroo. How much, if at all, do you adapt your playing style based on who’s watching?

JS: You try to keep consistent to just doing what you do; you might just have a different notion in your head. We’ll vary our set every night to suit the audience and for what appears to be the appropriate environment. We played a Celtic festival in Glasgow, Scotland, and I don’t know that we necessarily lean so much on the Celtic stuff that we do, because there was already a lot of that being played.

LEO: Any new work on the horizon?

JS: We’re just focusing on this album. It seems like it’s been around with us for a while, considering it only came out in October. Putting our focus on touring in support of that. Month or two away from festival season, and we’re pretty well dominated by this (album) right now.