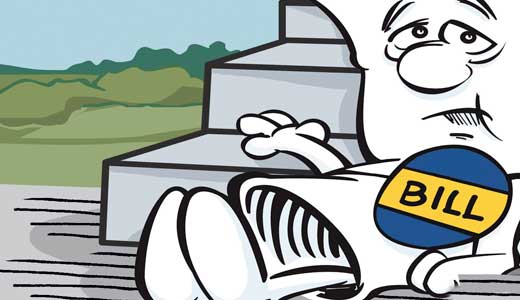 As the new year approaches, so too does the 2011 General Assembly, wherein 138 members of the Kentucky state legislature have 30 days to enact vital reforms, fix a broken pension system, and plug a $142 million hole in the Medicaid budget, whose rolls account for nearly 20 percent of Kentuckians amid rising unemployment levels (10.2 percent) and new census data that says the state’s population is flat-lining.

But if you’re looking for a miracle, that isn’t likely to happen — especially if you ask state legislators, who believe the 2011 gubernatorial race will have a negative effect on the regular session, which begins Jan. 4. That’s because the race will likely pit Kentucky Senate President David Williams, R-Burkesville, and his running mate, state Agriculture Commissioner Richie “Mustache Basketball Man” Farmer against incumbent Democratic Gov. Steve Beshear and his hopeful lieutenant, outgoing Louisville Mayor Jerry Abramson.

“In this case, you have a unique situation where the president of the Senate is running against a sitting governor,” says Rep. Jim Wayne, D-Louisville. “I don’t think David Williams will hesitate to use (his Senate leadership) as a bully pulpit in order to make headlines. The governor will then come back and blame Williams for a government run amok, a government that’s pretty much at a standstill. He’ll paint Williams as the person who’s blocking any progress in Kentucky. It’s unfortunate that it’ll be that way, but that’s what I anticipate, and that means that the legislative session won’t be very productive.”

But that hasn’t stopped lawmakers from filing roughly 50 bills that range from good to bad to ugly to just plain odd.

Chief among the good bills: Louisville Democratic Rep. Mary Lou Marzian has co-sponsored a bill that amounts to a statewide fairness law, which would prohibit employers from discriminating against employees on the basis of gender identity and sexual orientation across the commonwealth.

“This is probably about the 10th time we’ve introduced it,” she says. “What we’re hoping for — and I’ve been working with the fairness groups on it — is to get a hearing (in the Judiciary Committee). It’s just sat there in committee all this time. If we could just get a hearing on it, and talk about it, and possibly get some of the businesses that have non-discriminatory policies in place already … and say, ‘You know, it’s a good thing to have this in Kentucky, because it makes other companies want to come here,’ that’s part of the strategy.”

Marzian admits she doesn’t have any illusions, however, because “the General Assembly is so homophobic. But … when you look at the data, (most people statewide) believe that you shouldn’t be fired if you’re gay.”

“You should have freedom of speech, but not freedom of slander,” Nelson says. “That’s a good quote! … Down in this area (Bell County), it’s terrible: I get on (www.topix.com, an Internet message board) and see these people talking about these little girls and boys, and I think they should have some protection.”

Interestingly, Nelson says he’s sponsored a bill that would curb food stamp abuse by requiring recipients to provide photo identification upon their redemption, adding, “believe it or not, the idea came from a Louisville grocery store.”

When asked which grocery, Nelson actually protects their anonymity. “I know it, but I’m not going to tell you,” he says. “I don’t want them gettin’ burned down or nothin’.”

As far as the ugly ones go, few reflect the state’s empty coffers better than the measure introduced by Rep. Brad Montell, R-58, who seeks to raise money for school districts by permitting businesses to advertise on public school buses.

“I was just sort of cruisin’ the Internet one night, I guess you could say,” Montell says, “and I saw where other states had done this, and it just seems to me in these times of tight finances, that anything we can do to provide revenue for our school districts would be a good thing. This (bill) would simply allow the local districts, at their discretion, to use their school buses — at no cost to them — to provide advertising space for local businesses and raise some extra revenue. That revenue would stay local and wouldn’t go back to Frankfort and be redistributed in any way.”

And regarding the odd bills: Democratic House Speaker Greg Stumbo has co-sponsored a proposed amendment to the Kentucky constitution that would “create a right to hunt, fish and harvest non-threatened species using traditional methods.” The state constitution was last amended in 2004, when same-sex marriage and civil unions were explicitly banned.

“I didn’t know that those rights were being threatened,” state Sen. Tim Shaughnessy, D-Louisville, says of Stumbo’s peculiar proposal.

“You’d have to ask David about that,” Shaughnessy says. “He’s proposed some things that specifically are going to impact Jefferson County … The last time David weighed in on issues in Jefferson County, we’re now going to toll Spaghetti Junction, thanks to Sen. Williams’ leadership. So I think we need to be very careful, in terms of this community, when David wants to help us.”

Specifically, Shaughnessy is referring to Williams’ support of legislation that created the Louisville and Southern Indiana Bridges Authority, which just formally adopted tolling as a means to pay for the $4.1 billion Ohio River Bridges Project, as well as his support for so-called neighborhood schools, which run counter to the sometimes lengthy bus rides that are the result of the Jefferson County Board of Education’s student assignment plan.

“I think this is an issue that is best left up to the Jefferson County Board of Education,” Shaughnessy continues. “Those people ran for the school board and, frankly, they’re accountable for the school system in this community. If the state is going to weigh in and mandate a change in public policy, which Sen. Williams is proposing, then the state should pay for the cost of those changes.” Shaughnessy has proposed a bill that would require Williams’ plan, if passed, to pay for the program, which is estimated to cost approximately $200 million.

As far as tax reform goes, state Rep. Wayne commends Williams for bringing up the issue — an issue that Beshear has backpedaled on — but warns that simply talking about it isn’t necessarily a good thing depending on what shape such reform might take.

“A sales tax is the most regressive tax any state can impose,” Wayne says, “because wealthy people don’t spend every dollar that they earn, but poor people have to spend every dollar that they earn… You have to be cautious about the philosophy Williams might be bringing to the table, and that is a philosophy that may emphasize additional tax benefits to the wealthy.”

Although the specifics of a GOP-led reform effort are scarce, Williams nonetheless told the Northern Kentucky Chamber of Commerce that he plans to push through most of his dozen legislative items during the first four days of the session. He then went on to levy criticisms against the governor in an interview with The Cincinnati Enquirer.

“For (Beshear) to say … a few days before the legislative session starts, that he has no agenda, is unbelievable to me, and it ratifies what I’ve been saying,” Williams told the paper on Dec. 19. “He’s a caretaker governor without any idea of where this state should go. This state is adrift.”

Beshear, meanwhile, prefers to stay above the fray — for now.

“There is a time to campaign, and there is a time to govern,” Beshear tells LEO Weekly. “The upcoming session is the time for us to govern and do the work that will best serve Kentucky. Again in this legislative session, I look forward to working with the House and Senate on matters of mutual interest.”