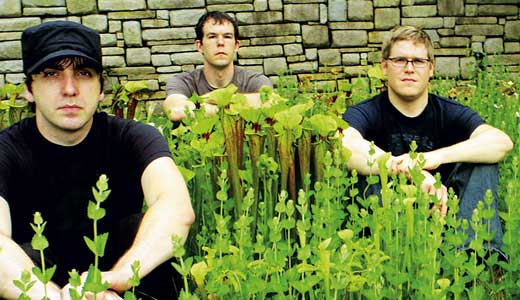 Maserati has never had a problem making your feet move. Since its inception in 2002, it has unloaded a steady barrage of motorik rhythms too danceable to be considered post-punk, but melodious enough to avoid dance music’s occasional sterile clichés.

For Pyramid of the Sun, a companion album to last year’s “Pyramid of the Moon” single, the band bounced around between several studios: Drums were recorded at The Bakery — basically a friend’s house in the band’s hometown of Athens, Ga., where Maserati recorded its last four albums.

Guitars, arguably the group’s key ingredient, were done at Cacophony Recorders in Austin with Erik Wofford, who engineered The Black Angels’ breakthrough album Passover and the self-titled debut from Workers, formerly Your Black Star.

“On some level, we’re kind of a guitar-based band,” guitarist Matt Cherry says. “Since we don’t have vocals, we spend a lot of time on our guitar tones, and pretty soon you end up with like 15 guitar tracks.”

But it was Justin Van Der Volgen (!!!, Out Hud) who made the album’s instrumental flourishes stand out. “Justin is a DJ basically,” Cherry says. “He wasn’t afraid to pull a tambourine up really loud (in the song), or edit things that were too long. It was nice not to have a bombastic, standard rock mix.”

Nothing about Pyramid was standard. The album serves as Maserati’s last recordings with Gerhardt “Jerry” Fuchs, who died on Nov. 8, 2009, at age 34, after falling down an elevator shaft in Williamsburg, Brooklyn. A.E. Paterra, of Zombi, will be behind the kit for this tour.

“Aesthetically he sits with us pretty well,” Cherry says. “You’re not gonna see somebody doing one-armed drum fills or anything, but Tony, in his own right, is a great drummer.”

As a bonus addition to Thursday’s show, Seluah reunites. Formed in 2000, the band features members of Rachel’s and Boom Bip, and the band is hoping to have new copies of its 2002 self-titled EP available.