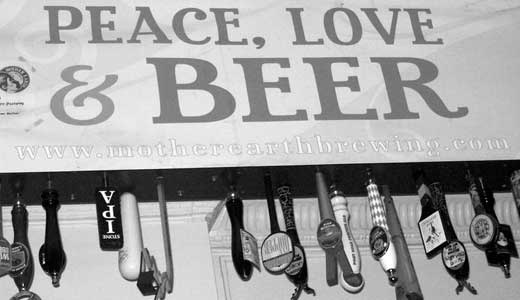 When the worn bar stool begins to feel too much like an obligation and not an elation, I need a vacation. A change of scenery. A week of sleeping through hangovers and leaving my twats and texts far behind. Although I heard about some great deals along the Gulf Coast, I opted for an easier, cheaper and less messy destination — one steeped in beer bliss. Asheville, N.C., is the mecca of beer on the East Coast, or so I heard. It’s only a six-hour drive from here. And if you can get past the hippies and Biltmore tourists, a friend told me, you’ll find a quaint little area that’s kinda like the Highlands to the third power times pi. Imagine taking Baxter Avenue and stretching it across Metro Louisville like a Karen Sypher facelift. “Did I mention Asheville is home to more than 10 craft breweries?” my friend mumbled between gulps of Falls City. He had me at “did.”

Lucky for me, Asheville’s granola reputation resonates far and wide, and I was able to talk my health-conscious girlfriend into joining me on the beer sabbatical. While I didn’t play up the part about the 10 brewpubs, I did mention the rampant vegetarianism that has overtaken this small, artsy, fun-lovin’, left-leaning, nature hike-goin’ town. That’s right. For all the new flavors and styles I’d get to experience, I knew I had to put up with a few trips to the Birkenstock store, a few journeys up a mountainside and a few vegan hot wings.

The drive was, indeed, only about six hours, as Asheville sits not too far from the Tennessee/North Carolina border. But if you’re riding with someone with a musical attention span of two songs, the trip can seem like two days. “Look at that beautiful mountain,” I’d say. “Change the CD,” she’d reply. “Oh, lookie, Dollywood!” I’d say. “I’m over Madonna! Change it!” she’d reply. “I gotta pee,” I’d say. “Let’s listen to that new Kylie Minogue song for the 127th time,” she’d reply. She also avoids fast food at all costs, so her “road snacks” consisted of sushi (no kidding) and protein bars. My days of dipping fries in a Frosty were long gone, at least on this vacation. But there was sweet, sweet beer in my future …

We checked in and pointed the car toward downtown Asheville, where the hotel clerk said we would have plenty to do if shopping, eating and drinking were on the agenda. She was right. I got to pick the first night, and we ended up at Scully’s, because I was hungry and tired of walking around, reading menus, scratching our heads and looking aimlessly around. It was a bar, with a menu of bar food, or so I thought. I saw nachos, cheeseburgers, spicy chili, chicken wings and potato skins. My girlfriend saw fish tacos, crab rangoon and shrimp burgers. I should have known this town was different when a “hemp nut burger” is considered pub grub. I know what hemp is. I know what nuts are. One you smoke, the other goes on top of sundaes, but neither belongs in burger form.

Our meals, while always incredibly delicious, mimicked this experience. Tupelo Honey, Early Girl, Lexington Avenue Brewery, Flying Frog … there was no menu that didn’t satisfy us both, even the all-vegetarian restaurant The Laughing Seed, where I enjoyed a black bean burrito. And I endured two hikes during our stay, one that ended blissfully in a waterfall, the other that, well, never seemed to end. Let’s just say I learned to respect toilet paper immensely that day. But back to beer …

We got to as many breweries we could. Most bars serve only local beers on tap, so it was easy to kill two birds with one foam. My favorites were Green Man at Jack of the Woods, a delicious amber from the Asheville Pizza Co., and lots of pints from Craggie, Pisgah, LAB and French Broad brewing companies. It’s hard to choose a favorite bar, but it had to be the Thirsty Monk, which served primarily Belgian beers. Its logo is my mantra: “Peace, Love & Beer.” We also were called “virgins” by a cross-dressing nun when we walked in, so go figure.