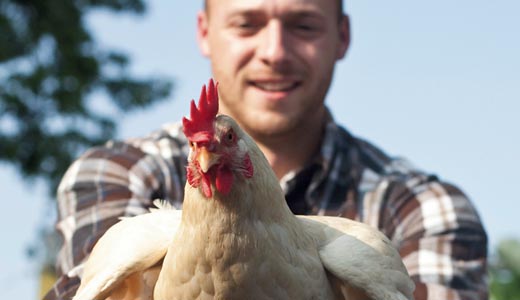 Yes, it is legal.

Metro Louisville ordinance clearly permits persons living on half an acre or less to keep one rooster and five hens in an enclosed area. Yes please, and thank you. Don’t mind if we do.

That urban chicken keeping is a trend on the uptick now seems indisputable.

I’m willing to bet most LEO readers have at least heard talk of, or know folks who are building coops and keeping chickens in their yard. To the charge that it is simply a fad, I submit that, unlike tight-rolling the cuffs on your jeans or owning a pot-bellied pig, keeping chickens has significant foundational ethics, namely changing perceptions about food, self-determination and community. Add to that the simple pleasure of hanging out in your yard, free eggs and, if you choose, a chicken dinner once in a while, and you’ve got the makings of a phenomenon on your hands.

If you stare at a chicken very closely, I mean if you really look at the bird with the intention of seeing it, you’ll recognize they’re descended from dinosaurs. They’re old. Really old.

The intimate cooperation between chickens and humans is old as well: The birds were first domesticated in Asia around 8,000 years ago. In this country, it was common for households to keep chickens until just after World War II when many Americans, enticed by the convenient offerings of post-war modernity, covered their victory gardens with patio furniture and turned their chickens loose.

But renewed economic challenges, skepticism of industrially produced foods whose origin is often unclear, and the longing-come-need for some measure of self-reliance are compelling more folks to start tending kitchen gardens the way their parents’ and grandparents’ generations did. Likewise, more people are discovering that keeping chickens is an inexpensive and surprisingly manageable way to complete the cycle of successful small-scale gardening and greater food independence. Ben Block of the Worldwatch Institute sums up the situation by saying, “The chicken has become the mascot of the local foods movement.”

Chickens will eat just about anything we call food and plenty of things we wouldn’t: corn cobs, rinds, bugs, seeds, stalks, grass clippings, etc. What used to be called waste is now referred to as “residuals” in the green lexicon. Chickens love residuals, and the dividends are paid in fresh eggs and rich fertilizer.

One chicken can consume up to 7 pounds of kitchen scraps per month. That’s 364 pounds of trash diverted from the landfill annually per bird. Adding the resultant chicken poop to your compost will speed up the composting process, amp up the available nitrogen, and is worth its weight in gold in your garden. Chickens don’t know better than to work for next to nothing. They’ll turn your compost pile for you as they forage for scraps, and they’re walking bug killers that help keep pests out of your garden, though they’ll nibble on your crops given half a chance.

While chickens can live on kitchen scraps alone, their diet should be supplemented with some grain feed in the form of crumbles and scratch. A 50-pound bag of good feed costs between $10 and $15 and, in conjunction with lots of kitchen scraps, will feed four hens for a month or so. How much did you spend on eggs last month? Do you know what the hens that laid those eggs were eating? As master gardener Steve Paradis says, “It’s not what you feed yourself that counts, it’s what you feed your food.”

Keeping chickens is a project that comes with a deluge of literature and advice, which can seem overwhelming and intimidating. But the chicken owners I spoke with assured me that, as is the case with gardening, composting and “other affairs of plain living,” it’s really not that difficult, and getting started is the biggest step.

On a mild evening a few weeks back, I took a walk in Shelby Park with a friend. We passed by some kids playing in the fountain near the community center, and stopped for a minute to watch a football team running drills out on the turf. It was a pleasant, if largely unremarkable, stroll through an inner city park. Having grown up in Louisville in the ’80s, I recall seeing exactly zero live chickens in the city, but there, about 30 feet away from the sideline of the rumbling scrimmage, we found a small backyard with four tidy, raised garden beds, a children’s play house, and a chicken coop bustling with activity. On our walk around Shelby Park that evening, we found three homes where folks were keeping chickens.

After his tour in Iraq, Dane Beam and his wife, Kristy, moved to Louisville. The couple and their three children have lived in the Shelby Park neighborhood for a year and half and bought their chickens from an Amish farmer last fall.

The Beams have three laying hens and a rooster, and are brooding two new hens in their kitchen to be introduced to the flock in a few weeks. “They say if you’re going to have a rooster, you should have at least five hens. These older hens are a little ‘over-worked’ right now,” Kristy says, chuckling. Just then, a large and distinctly oversexed Leghorn named Davy Crockett took the opportunity to peck, mount and generally harass his harem.

The Beams say they’d get rid of the rooster if the neighbors ever complained about the noise. So far, though, their neighbors have only said how much they love the sound of a rooster on the street, and the neighborhood kids come by often to check in on the birds.

When I asked them why they decided to raise chickens, the couple cites the economic recession and a growing distrust of the industrial model of food production as primary concerns.

“We want access to higher quality food and nutrition,” Kristy says. “But a family of our size, and we hope to grow, we can’t afford to buy all the organics we need.”

The Beams feed their chickens all of the kitchen scraps they produce and are getting two-four eggs per day from the mature layers. They plan to eat the hens when their laying days are over and are keeping a garden for the first time. Knowing they can produce at least some of the food they need rather than “going to the super market and getting it all from a box” affords the couple a sense of security, says Kristy. “What are we going to do if we go to the grocery one day and there’s no food on the shelf? You’ve got a whole generation of people out there who don’t know how to feed themselves.”

Steve Paradis is the owner of Fresh Start Growers’ Supply, a garden supply and feed store that specializes in organic seeds, fertilizer, feeds and tools for the urban gardener. As Paradis sees it, he and the folks who come through his door are engaged in a food revolution that seeks to, “Reclaim the food system from an industry that is profit motivated, not health motivated.”

People who support community agriculture are interested in supporting both community and agriculture. It could be said of the local food movement that getting good food into people’s bellies is of secondary importance to creating community ties and allowing people the opportunity to know where their food comes from. Paradis suspects a measure of food independence isn’t the only thing his customers are looking for when they come in to buy seeds, chicks or feed.

“People are tired of feeling isolated, they’re tired of the Internet and driving around in their cars, and they want some connectivity to nature,” he says. “In a world that seems out of control, if you can control your food, it can be a remedy for the things that are so chaotic.” In gardening and keeping chickens, Paradis believes people engage in “something meaningful, simple and gentle that you can share with your friends.”

In addition to being an ecologist, an educator, and the founding member of the International Porch Sitters Union, Claude Stephens also is a husband, father and aspiring “urban homesteader.” We spoke at his Irish Hill home recently where Claude, his wife, Erin, and their daughter Ruby keep four hens.

Like many people who want to be as self-sufficient as possible, Stephens figured he’d end up in the country someday, owning and working a parcel of land, but his ideas about sustainability have led him to a belief that he can get more of what he wants here, in the city.

“In the city, you have more face-to-face communication, easier access to people,” he says. “There are walkable neighborhoods, restaurants. There’s community. Everybody can’t have 40 acres. There’d be no space. But you can farm in the city, and cities should try to feed themselves as close to the city as possible”

Stephens sees keeping chickens as a means to some very utilitarian ends: eggs, meat, the ability to turn waste into food and the potential for a barter economy. But he finds the greatest value to be something other than a measure of practical independence.

Stories and education are the real keystones.

“In the South, we tell stories, that’s how we pass on knowledge,” he says. “In my line of work (as a sustainability consultant and educator), I talk about sustainability all the time, and I always end up telling stories about my chickens.”

Stephens makes sure to show me a short home movie of his 2-year-old daughter feeding the chickens in their coop. In the video, Ruby runs back and forth in a loop alternately squealing, petting the chickens and throwing more feed than they can possibly eat into a rough-hewn wooden trough. She is visibly excited, totally in her element, and very much at home.

“The most important thing is reconnecting kids with food, and the kids in my community already know more about chickens than their parents do, maybe not their grandparents, but more than their parents,” Stephens says. “We’ve taught Ruby that you have to lock the door to the coop when you leave. If I ever forget to do that, she’ll remind me. She’s learned.”

The coop Stephens built for his hens is both practical and good-looking. Inside the large enclosed run that’s attached, he’s got just about everything you’d expect: a couple of cans of feed with tight-fitting lids, some hay, and a medicine cabinet mounted to the wall with a small bottle of whiskey inside, “Just in case I have guests,” he says. I notice the feeding trough that I’d seen in the video, and Stephens explains he built it himself using wood from a picnic table his grandfather built. “I ate at that table my whole life. Three generations of my family ate at that table,” which eventually became too worn for the purposes of dining. “I guess it’s four now, if you count the chickens.”