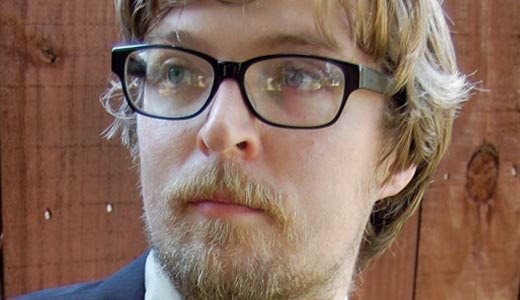 Patrick Wensink, an author who recently moved here from Portland, Ore., spent his childhood in rural Ohio mostly alone entertaining himself with his strange thoughts. We have this to thank for his first collection of short stories out on Eraserhead Press, “Sex Dungeon For Sale.” It’s a provocative title for sure, but one glance at the Eraserhead Press website shows it in context, alongside other titles such as “The Haunted Vagina” and “Fistful of Feet.” Wensink seems to have found his niche with this press, one of the foremost publishers of what has been dubbed “bizarro fiction.” Bizarro seeks to exist only at the extreme end of the weirdness scale, to present violence, sex and pop culture at their strangest, and to be, above all, hilarious and entertaining. Excess is key.

Wensink’s collection finds him somewhere in the middle. Yes there is sex and violence, but the author’s excesses stay more in the background, or come to us as consumer goods, the way most things do. My favorite story, “Wash, Rinse, Repeat,” is about a dishwasher company that provides (free of charge) a kill cycle. Huh, what could that button do? I’ll give you a hint: It kills you.

What follows is not only hilarious, but also a commentary on useless goods and the nature of consumer need. This is Wensink’s special touch: to go as far out as possible with character and concept, but still drive a deeper meaning home. He does so by mixing his Palahniukian style with the kind of twisted humor you can normally only find on Adult Swim.

I spoke with Wensink to get a better idea of what this twisted buckeye is doing in our fair city.

LEO: What kind of person reads bizarro fiction? Is there a community out there?

Patrick Wensink: I’m actually learning this right now, by going to bizarro conventions and meeting the other writers on the press. There isn’t one type of person who is into it — younger people, older people, etc., even conservatives. I think mostly it’s people who are looking for something different. My publisher says she looks for a book that will make people say, “Oh my god, I can’t believe someone made a book about this.” It has to be weird but original. Not just weird for weird’s sake.

LEO: Can you give me an example of a typical “Wensink” story?

PW: When I composed this book, I realized there was a theme of … well, not ever truly knowing anybody. Everybody in this collection has some sort of secret. Whether it’s their online persona, or the person you are in class versus the person you are at a party. Everyone has a million different personalities, and you can never know all of them. Everyone in this collection is hiding something from somebody. Like the realtor who has to show the house with the sex dungeon to the customers — she may be repulsed by it, but she still has to sell it. I also want to make sure my stories are fun.

LEO: Sounds like a kind of mantra for bizarro.

PW: Yeah, bizarro makes reading fun. That’s a good slogan. You know, with so much entertainment nowadays, with video games and the Internet, I want to make it worth somebody’s time to read my story.

LEO: Do you write any fiction that falls outside the bizarro world?

PW: I just write fiction, you know? I don’t set out to write bizarro stuff, that’s just where my stories happen to end up. Most presses told me my stuff was too weird for them. Eraserhead Press was just open-minded enough to take it.

LEO: Some of the stories in your collection have an element of capitalist satire. Was this intentional?

PW: Yeah, and I hope people take away something more from it. I don’t want people to think it’s just for a laugh. But on the other hand, I do think making people laugh is the best way to kinda slide in a message. People are more willing to listen when you case your message in a good joke. I actually have a public relations degree, so I have an inside picture on how that kind of thing shapes people’s thinking. I mean, I’m not saying it’s wrong or right, but it’s definitely something that’s fucked up and should be exploited for stories.

PW: A lot of these stories either came from newspaper articles I read or just from me mishearing things. I have horrible hearing, but somehow it’s really worked out for me. “Sex Dungeon,” for example, maybe someone said “sweet bungalow for sale,” and I just heard it wrong. Then I start thinking, “Huh, sex dungeon for sale. I wonder how that would work out?”

LEO: So real life does kind of inform your work?

PW: To some extent — for example, newspaper articles and pop culture. The story in the collection about James Brown’s clothing and memorabilia being auctioned off, that basic story is real and really happened. They had an auction of his estate to pay off all of his debts after he died. They were selling stuff like his hair curlers, a “Happy Birthday, James” poster — things like that. I saw this article and I thought, “Who buys this stuff?” It really makes me wonder. It was a kind of thought experiment but also an emotional autobiography. There’s nothing in this book that is from my real life directly, like a Norman Mailer story or something, but you know, I may have also lost something, and I wonder what its second life was like. That element is buried in there.

LEO: And this is what helps you draw the reader into a weird story?

PW: Real life is pretty fucked up. These stories are pretty out there, but they aren’t any weirder than real life. People should not have a hard time relating to these.

PW: Well, I’m becoming a good Kentuckian. I’m getting a flavor for my bourbons now. Booze is my drug of choice.

PW: No, I never have, but a friend actually told me that there was an HGTV special where they were remodeling someone’s house, and they found a sex dungeon in the basement. I really need to find that episode.

LEO: You’ve been working on a novel. What’s it about?

PW: It combines a hamburger that is more addictive than crystal meth, with a guy who figures out that he is more productive when he’s drunk than when he’s sober. The problem is that he can’t remember anything. It’s done now actually. I had an agent for a while, and she got it in front of Viking (Press), and they gave me what I think is the biggest compliment I have ever received. The woman she talked to said the book “nauseated her.”

LEO: What author do you hate the most?

PW: Plato. That guy is an asshole.