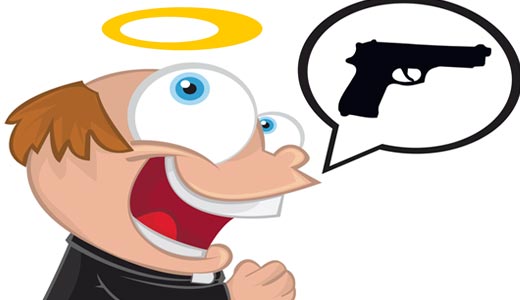 And if you become paralyzed while thoughtfully researching an answer, you’re not alone. President Barack Obama, the nation’s first BlackBerry-American president, set the ’09 tone in January by rolling up his sleeves and doing almost nothing. At first it seemed like a bad move, but when we thought about how much better off we’d be if George W. Bush had done nothing, it made a lot more sense.

So when we needed drama in 2009, we turned to white people — like Michael Jackson. The King of Pop went off to that great cosmetic surgery/daycare center in the sky, soon to be followed by the world’s only known whiter man: Ted Kennedy. Meanwhile, Rick Pitino announced that $10 million was too much to pay for a one-night stand (even if it includes dinner at Porcini), Americans tuned in to watch TV misinfotainer Glenn Beck spend the year in the fetal position, and Sen. Jim Bunning announced that he was going to pack up his medieval worldview, retire and stop embarrassing the commonwealth. (Sigh.)

In 2009, unemployment soared, wars raged, our environmental problems worsened, and a baby was denied health insurance because he was too fat. But there was plenty to be hopeful about. In New York, pilot Sully Sullenberger landed a plane in the Hudson River, miraculously saving everybody on board, including those whose skin came in contact with the Hudson River. And just in case anybody started getting any big ideas about America’s empire fading, we shut them up in style by bombing the shit out of the moon.

How well were you paying attention? Let’s find out.

1. If you use Google or ChaCha to cheat on this quiz:

A. You are a smart, sophisticated consumer of new media, doing what middle-school kids do all the time. Nothing wrong with that, right?

B. You should totally be using Bing, the world’s first decision engine

C. God will punish you

D. Whatever, man. We just hope you can live with yourself

C. Republican representative from South Carolina who blurted “You lie!” (and later apologized) during a speech by President Obama to Congress

D. George W. Bush presidential protégé in Afghanistan who knows a thing or two about how to steal an election

E. Already a mother of six, she gave birth to octuplets in January, earning the nickname “Octomom”

G. Montana assclown senator at the center of health care reform who received $4 million in contributions from health care companies

A. A banking term for bad mortgages on foreclosed houses following the housing market bubble and collapse

B. A road movie starring George Lopez and Gabriel Iglesias, who go in search of the perfect burrito

C. The administration’s term for the roughly $800 billion the U.S. owes China

19. What did Sen. Mitch McConnell propose as an alternative to the Democrats’ health plan?

B. Tax cuts for the wealthy and a surge in Afghanistan to take our minds off the problem

D. A federally funded bottle of Pepto-Bismol and a Goody’s Powder packet for every American

A. The teams of executives who negotiated a dispute between insurance company Anthem and Norton Hospitals

B. The concrete bracings that fell during construction of the Louisville Arena in April, trapping a dozen workers and injuring three

C. A Windows 7 console that helps users recover from a crash

D. Too idiotic to dignify with a quiz answer

21. What does the acronym BRIC stand for?

A. A popular club-drug combination of bourbon, rum, ice and crack cocaine

D. A populist Facebook movement focusing on revisionist history that calls itself “Boy, Reagan Is Cool!”

B. The Twitter names of Paris Hilton, Kourtney Kardashian and Sarah Jessica Parker

D. Three of the stars outside our solar system that are known to have some of the more than 400 known “extrasolar” planets

Match the 2009 buzzphrase to its definition:

A. The prevailing Washington wisdom that some businesses are so large that their demise would devastate the economy — or worse, disrupt campaign contributions

D. Advertising campaign that has convinced people that it’s cool to spend hundreds of dollars for a phone that mimics a koi pond or a pedometer

E. The official military policy that keeps gays and lesbians from serving openly — President Obama pledged to overturn it but has not done so

F. A group of moderately retarded Americans including Lynne Cheney and Lou Dobbs who believe President Obama was not born in America

30. In a July press conference, who did President Obama claim “acted stupidly?”

B. Americans who spent an estimated $27 billion on vampire-related entertainment

C. Cambridge, Mass., police, for arresting Harvard professor Henry Louis Gates for breaking into his own home while black

E. Obama himself, for speaking out about the situation

31. What did billionaire investor Warren Buffett call “an all-in wager on the economic future of the United States?”

A. His part-time job as a greeter at Walmart following the economic collapse

B. His $1 million donation to the Beshear/Abramson campaign

C. His $44 billion purchase of the Burlington Northern Santa Fe Railroad, which he said he bought because his father wouldn’t let him have a train set when he was a kid

32. Who famously said, “I wish they caught me six years ago, eight years ago”?

B. American journalist Laura Ling, after being rescued from North Korea by the once-dreamy Bill Clinton

D. South Carolina Gov. Mark Sanford, who claimed to be hiking the Appalachian Trail but was really in Argentina with his mistress

E. “Swine Fluie,” a Muppet virus, in an exclusive interview with Guy Smiley on “Sesame Street”

33. What famous prediction did Sen. Jim Bunning make and subsequently apologize for?

A. That someday America would let women drive but “the country just isn’t ready for that yet”

B. That Supreme Court Justice Ruth Bader Ginsburg would die within nine months

C. That Senate hopeful Trey Grayson’s wrists would prove to be “as limp as Dan Mongiardo’s and twice as hairy”

D. That Jesus would come back as a Phillies pitcher in time to defeat the Yankees in the World Series

34. How did Kentucky raise approximately $150 million to help close a $456 million budget deficit in February?

A. A property tax on mega-churches, doublewide trailers and front-yard appliances

B. A midnight raid on Ohio

D. Doubling the tax on cigarettes and alcohol

35. What did Attorney General and Senate candidate Jack Conway say at Fancy Farm that angered some in attendance?

A. “I’m really happy for you, I’mma let you finish but Beyoncé has one of the best videos of all time!”

C. “… and I’m going to be America’s teabaggingest death panelist ever! Stand up and get crunk, y’all!”

A. Tweeting about his gay marriage

B. Reading from Sarah Palin’s Facebook blog during a Sunday service

C. Inviting people to bring their guns to church

D. Shooting “It’s a miracle!” into the altar with a semiautomatic handgun

37. In a hurried vote, the University of Kentucky Board of Trustees moved to name a new dormitory after an entire industry in exchange for a $7 million donation. What is the controversial name of the new dorm?

A. The Other White Meat Hall

A. Former Kentucky Senate Floor Leader appointed to a circuit judgeship by Gov. Beshear in an attempt to rid the Senate of Republican cooties

B. Louisville mayoral candidate and chronic foot-shooter who misappropriated the St. X High School alumni list in an attempt to raise funds for his campaign

C. A Jeffersonville city attorney who was found passed out in a garbage can

D. A Joe’s Crab Shack employee who rescued a dog that had been thrown off the Second Street Bridge

44. Following the arrest of Harvard Professor Henry Louis Gates and President Obama’s subsequent comments about it, what did Fox News misinfotainer Glenn Beck say about Obama?

A. “Ya know, the guy is half black and half white. If he were a cop he’d arrest himself …”

B. “This is just another example of the president’s Nazi, communist, fascist leanings coming to light”

C. “This president has a deep-seated hatred for white people”

D. “Dammit! I want my blankie and a cup of cocoa and I want all the scary socialists to go away right NOW!”

45. Radio misinfotainer Rush Limbaugh was rebuffed by African-American employees when he tried to buy into what company?

55. The U.S. State Department made headlines in June when it:

A. Asked Facebook to remove a fan page called “Obama Can Has Cheezburger”

B. Asked Twitter to delay an upgrade that would have interrupted service to Iranian protestors during that country’s election upheaval

D. Censured an employee for releasing data showing that global warming is a myth

B. Pimp My Taint

A. To restore order after a 6.0 Richter Hollywood earthquake, which was so violent “even the breast implants jiggled”

B. To subdue a melee after a run on legal marijuana dispensaries

D. To quell the “Leno Riots” — mobs of protestors who claimed Jay Leno shouldn’t get a new show because “he hasn’t said anything funny since 1995”

58. Who said, “I got in the car this morning and the navigation lady wasn’t speaking to me?”

B. Disgraced former congressman/sleazeball Tom Delay, during an apology for doing the pelvic thrust on an episode of “Dancing with the Stars”

C. David Letterman, during a humorous albeit painful on-air apology for having sex with members of his “Late Show” staff

D. David Letterman, during a humorous albeit painful on-air apology for a joke about Sarah Palin’s daughter getting “knocked up” by New York Yankee Alex Rodriguez

59. In 2008, Cincinnati Bengals wide receiver Chad Johnson legally changed his name to Chad Ocho Cinco in honor of his jersey number 85. After a yearlong battle to wear his new name on his jersey, he finally won permission, but had to spell it exactly how he submitted it on his form. How does the official NFL jersey read?

B. Ochenta y cinco, which is actually 85 in Spanish

A. Former Memphis basketball player found guilty by the NCAA of cheating on his SAT exams, causing his team to vacate its entire 2008 season

B. Olympian swimmer shown hitting a bong in a British tabloid

C. Former Holy Cross head basketball coach who accepted an assistant coaching job at Louisville, prompting rumors that Rick Pitino would quit in the wake of the Karen Sypher scandal

D. The first jockey to win the Kentucky Derby and the Preakness Stakes on two different mounts

66. What did U of L guard Edgar Sosa say about his last-second three-pointer from 25 feet to beat Kentucky in January?

A. “I don’t know about y’all but that’s going in my spank bank!”

B. “It’s like I told Coach: If you liked it you shoulda put a ring on it”

C. “Twenty years from now I can tell my kids that I played for Louisville and hit the shot that beat Kentucky”

D. “I went to sleep as Rihanna and woke up as Britney Spears”

E. “People around here take basketball too seriously. It’s just a game. What about war? What about global warming? What about Detroit?! Wake up, people!”

67. According to an FBI affidavit, what did former auto-glass saleswoman Karen Sypher demand from Louisville basketball coach Rick Pitino in her famous extortion attempt?

A. Porcini’s Maiale alla Pitino once a week for life and $10 million

C. Two cars, a house, tuition for her kids and $10 million

D. A big man who can penetrate and take it to the hole

2. Only one answer per question, one submission per person.

4. LEO Weekly is not responsible for entries that are late, misdirected or otherwise fouled up, including any befouled by computer or network malfunctions, congestion or lethargy. Such entries will not count.

5. The top three winners and quiz answers will be published in the Jan. 13 issue and at www.leoweekly.com.