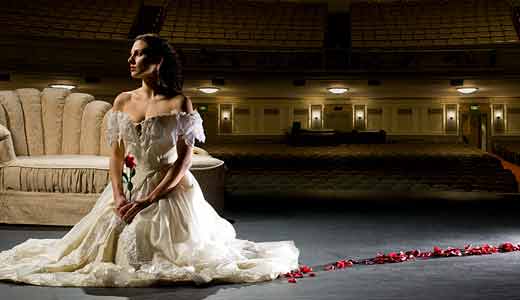 Kentucky Opera is trading in residence at the 2,500-seat Whitney Hall for the 1,300-seat Brown Theatre, and general director David Roth knows his biggest sales job for the coming season will be to convince longtime patrons that the Brown is grand enough for grand opera.

But the impresario has an ace up his sleeve: The Brown won’t be an inch bigger than ever, but the sound, he says, most certainly will be.

The secret is something audiences won’t even see: The orchestra pit, the cramped space tucked out of sight underneath and slightly in front of the stage, will be nearly doubled in size. The old pit at the Brown held about 32 musicians — if most of them played piccolos. A major expansion of the pit makes room for 60-65 musicians. (And maybe now they can squeeze in some bassoons and trombones to go with all those damn piccolos.)

The change should make a world of difference in the sound in the theater, says Roth.

“The Brown has changed dramatically in the last five to seven years,” he says. “First with renovations on the outside and in the lobby, then a beautiful restoration of the interior, to what is currently happening backstage that will allow us to produce grand opera at a scale that people have not seen in the Brown Theatre before.”

Make no mistake, scale is important. Grand opera is supposed to be grand. The major works feature plenty of tender duets and heart-wrenching solos, but sooner or later armies have to march, peasants need to join in a chorus and all hands must swirl into a glorious costume ball — amid lavish sets. The recipe for grand opera calls for a bigger stage, bigger sets, more costumes — and plenty of blood. Valkyries, masquerades, murder, and a big, big sound. That’s the spectacle of grand opera.

But all that is expensive. Kentucky Opera’s budget is about $2 million. Cincinnati makes do with $7 million. Chicago Lyric is at $54 million, and the Metropolitan Opera writes checks for whatever it pleases at $270 million. But that doesn’t mean the smaller companies can’t produce excellent productions. And they certainly do.

Roth says the change of venue will enable Kentucky Opera to get more bang for its bucks. The company, he says, will produce more performances of more shows — and do them better — with a reduction in the expense of filling a huge stage with vast sets and hordes of people.

“In a larger auditorium like Whitney Hall, it takes a lot of money and a lot of theater on stage to make an impact on the audience when they are seated 120 to 150 feet away,” says the impresario. “You need big personalities, big voices, big numbers on stage to make a theatrical impact in an huge, austere hall.”

Roth says he will take the same big voices and turn them loose in the more intimate spaces of the Brown. The farthest seat from the stage, in the very back row of the balcony, is just 70 feet away. “I would argue it’s going to be a much stronger theatrical and musical impact for our audience. They will be up close and personal, if you will.”

And to prove it, Kentucky Opera leads off the season in September with Verdi’s “La Traviata,” one of the biggest and best-loved of all grand operas — and is bringing in Metropolitan Opera star Elizabeth Futral to sing the lead role of Violetta.

That’s about as grand as it gets.

The opera presents “Hansel and Gretel,” by the original Engelbert Humperdinck (1854-1921), in October, and “Of Mice and Men,” by Carlisle Floyd, in November.

Vicky Livengood headlines “Hansel and Gretel” as The Witch, who eats children. “Think of the power she will have on our stage,” imagines Roth. “This big personality and big voice on stage at the Brown Theatre.”

Smallest of the productions is “Of Mice and Men.” Readers familiar with the John Steinbeck novel realize there is no need for lavish sets and a cast of thousands for an opera adaptation. It’s simply the story of Lenny and George, sung here by Michael Hendrick and Rod Nelman.

Built in 1925, the Brown was the home of Kentucky Opera from 1964-1984, when the company began shifting presentations to the newly built Whitney Hall. Last year, the opera previewed its move back to the Brown with a rollicking version of “Pirates of Penzance,” directed by Thomson Smillie.

Now, says Roth, with the expansion of the orchestra pit, the Brown has been “tailor-made” for opera.

“What I hope to communicate to our audience is that artistically, this puts us at another level,” he says. “It is going to overwhelm them when they connect theatrically, musically, dramatically to the artists on stage.”