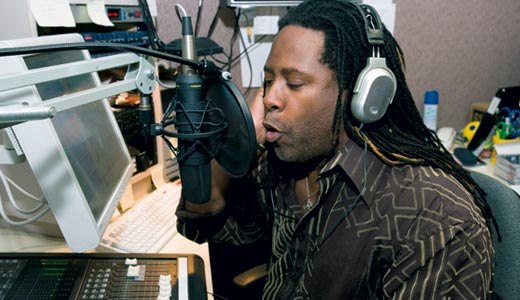 B96.5 DJ Mark Gunn equates the Performance Rights Act to the same old song and dance that radio has always done.photo by Spencer Jenkins

From a catatonic response to downloading, to archaic methods of contract negotiation and protection of “intellectual property,” to artificial price gouging of remaining dedicated music buyers, the industry is circling the drain financially and creatively.

So someone comes up with a new idea in an 80-year-old industry, a new revenue stream long ignored, a giant bag of money that would ensure artists’ livelihood for years beyond a hit. Now, the entrenched opposition is framing it as race-based legislation focused on one demographic, saying it will be the death of Black Radio.

How is this not being laughed out of the room?

John Conyers is a 21-term congressman from Detroit, and a founding member of the Congressional Black Caucus. His respect among his peers is unequaled, as is his lack of controversy, skeletons or any other night-bumping ephemera expected of a public figure of 45 years (his wife’s recent escapades being her own).

In February, Conyers introduced the Performance Rights Act (HR 848). The PRA is a payment to the performers of a song, not the songwriter, for airplay on terrestrial radio.

Similar fees have long been set for satellite, Internet and cable radio broadcasters, interestingly enough, at the urging of both the recording industry and the terrestrial radio companies. The bill does not interfere with other fees paid to publishers and songwriters, who have always gotten paid for airplay. The bill would also benefit, for example, both Aretha Franklin, who was not a writer, and her longtime guitarist Cornell Dupree and drummer Pretty Purdie, neither of whom has ever received payment for their collaborations’ unending radio airplay over the last 40 years.

Cathy Hughes is chairperson and founder of Radio One, a multimedia conglomerate holding 53 radio stations, a television channel, a magazine, a syndication unit and other properties. She, along with her former husband Dewey Hughes, purchased their first station in 1979. Their son is CEO of the company, which last year did more than $300 million in business.

Hughes, naturally, opposes the Performance Rights Act. She sees it as yet another bill to be paid, another piece of the pie taken out of her portfolio. As is her prerogative, she has taken to her own airwaves, using her voice and the voices of prominent DJs like Tom Joyner, Russ Parr and Steve Harvey to attack the bill.

Her method of attack is interesting: She frames her argument using race, positing that the bill is a missile aimed at minority-owned radio stations and stations that program for the African-American community, not a general-purpose bill meant for all, targeting none, and benefiting tens of thousands of musicians and performers, many of whom are members of the minority groups Hughes tells her listeners she represents. Joyner took to Washington recently, declaring that the bill would deny new artists the ability to get radio play. He told Conyers, “If this comes about, you won’t see very many new artists except on ‘American Idol.’” Additionally, Dennis Wharton of the National Association of Broadcasters warns, “The millions … of dollars in annual performance fees could prompt stations to lay off workers, decrease charitable donations, convert to all-talk formats or go dark.”

In an open letter posted online and read on many of her stations, she states, “Tell [Rep. Conyers] that you oppose this bill that would murder black-owned radio and the free music that you now hear on all free radio stations. In the midst of an American economic recession, it is not the right time to send millions of dollars to foreign-owned record companies that don’t even pay taxes like you and me in this country. This bill is not in the interest of black people! Please help us save Black Radio!”

Hughes is correct in wanting to prevent her stations from writing another check, but her argument is inherently false.

Small radio stations are protected under the bill. Stations with annual gross revenues of less than $100,000 would pay $500 each year, while those that gross between $100,000 and $500,000 would pay $2,500. Stations with gross revenues that are between $500,000 and $1.25 million would pay a royalty fee of $5,000 per year.  Stations billing less than $5 million per year would have a three-year head start on the fees, an amnesty Conyers has said he hopes would allow for stations to budget the expense as well as allow time for the economy to recover.

Further softening the blow, the PRA exempts incidental music (lead-ins when the DJ talks or snippets of songs) and religious programming. Public radio would pay a blanket $1,000 fee, which can be attained easily through, for example, a single WFPK-FM sponsored Over The Rhine concert.

For his part, Conyers is staying above the fray. Despite several attempts by LEO Weekly, the congressman has made no comment regarding Hughes’s politicking. His statements mirror those made on the Hill, focused on the balance of business and what he believes is right for artists.

“I believe that the time is finally ripe for establishing some form of equity for recording artists — allowing them to be paid fair compensation for their creativity. On the other hand, I am concerned about the economic impact this bill may have on smaller broadcasters. I know times are tough, and it is not the intention of this legislation to drive broadcasters into bankruptcy or to bring about a widespread consolidation of the industry. That is why I remain committed to finding a middle ground on this issue, including delaying the bill’s effective date, reducing the royalty payments due and ensuring that the needs of small, minority, religious and non-music broadcasters are taken into account. I remain ready and willing to work with all interested parties in developing any necessary further accommodation, as long as they are willing to work with us in good faith.”

Mark Gunn, a DJ on local urban station B-96.5 FM, sees the light from both sides of the candle. “I’m all for the artists getting paid, especially since in quite a few cases, they either get screwed by the labels or make bad deals themselves,” he tells LEO Weekly. “I just think Conyers and others are barking up the wrong tree. Where I disagree with the measure is in the song and dance that radio and records has always done. They have product they want us to play, and we want to play hit records.”