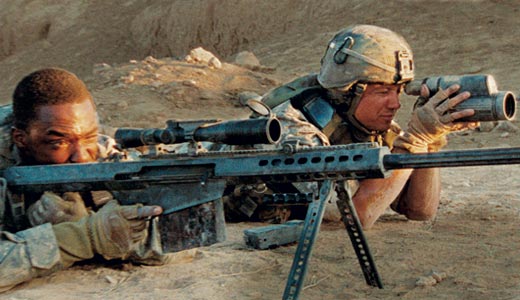 It’s been more than 20 years since Stanley Kubrick canned “Full Metal Jacket,” and nothing truly monumental has come out about contemporary warfare since. Even the great Sam Mendes couldn’t extricate “Jarhead” from the iconic lore of such Vietnam masterpieces as “Apocalypse Now” and “The Deer Hunter.” As great as it was, HBO’s miniseries “Generation Kill” was set in the first few weeks of the war, and didn’t touch upon IEDs and our subsequent six-year occupation of Iraq.

What sets Kathryn Bigelow’s “The Hurt Locker” so far apart is that it doesn’t attempt to maintain a dialogue with previous war films. Instead, her film immerses viewers into the reality of explosive ordinance disposal (EOD) teams in Iraq and explores the various psychological effects of occupying a hostile and foreign territory. Aesthetically, “The Hurt Locker” takes into account how perceptions of “realism” in cinema have changed with the advent of HD video and the rise of the docudrama. After all, this is not Vietnam — or even the Gulf War. We know how this war lives with us. We can watch it on TV and the Internet anytime we want, so it takes a grittier approach to disabuse audiences and wrangle them into a contemporary war reality.

“The Hurt Locker” was filmed in Jordan — a neighbor of Iraq — in both handheld 16mm and HD formats. For any given combat scene, four or more handheld super 16mms captured the action in jarring documentary style. The result of so many hours of expended footage boasts an exorbitant 100:1 shooting ratio — a toll higher than even the reel guzzling behemoth “Apocalypse Now.”

Screenwriter Mark Boal — who also penned the critically acclaimed “In the Valley of Elah” — spent time on the ground observing a real EOD unit in Iraq. Such experiences no doubt informed the rugged and chaotic action of his screenplay. The dialogue sounds not so much conjured as recorded, and, as the plot breaks down the protagonists, so too does it dismantle the audience, both with the depiction of tender family scenes back in the States and in the constant daze of anticipating what calamity comes next.

The detached disposition of Staff Sgt. William James (played masterfully by Jeremy Renner) is the story’s linchpin. He is at times unbearably tender, others shockingly bellicose and wayward. By the time we meet James, he has already disarmed almost 900 bombs, but as the epigraph reminds us, war is a drug, and James is hooked. Though a father to an infant son by a gorgeous woman, James is that enigma of war lust who actually volunteers to re-enlist for active duty, even when he’s earned the right to stay home. Stuck in the cycle of combat for so long, Iraq has become the only place he can thrive. Like an addict who’s only truly married to his drug of choice, we realize that James is doomed to do this job until it kills him.

Besides the thrill-junkie James, we have the Bravo company short-timers Sgt. J.T. Sanborn (Anthony Mackie) and Spc. Owen Eldridge (Brian Geraghty).  Sanborn desperately wants to play it safe and subdue his new reckless team leader, and Eldridge can’t wrap his brain around the mortal realities of combat. Throughout the film the three repeatedly butt heads, often trading blows and even plotting to kill each other. It’s as if they can’t shut off the switch to kill or inflict harm, even outside the duress of combat.

No doubt the most unprecedented quality of “The Hurt Locker” is its visceral exploration of the xenophobia — or perhaps xenomania — American soldiers feel after protracted tours policing such a formidable and alien terrain. In this new war of IEDs and human bombs, staying alive doesn’t really come down to dodging machine-gun fire and mortar rounds, but to perpetual vigilance and sentry. This is the war of paranoia and anxiety. The enemy doesn’t come in tanks and armored vehicles, but hides in the gathering crowd with a cell phone or video camera. The threat could be anyone; their weapon, the bomb these protagonists have been dispatched to disarm.