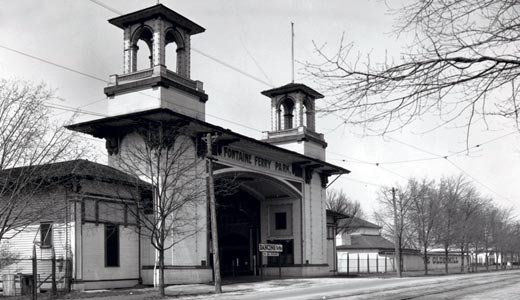 Courtesy of U of L Photo Archives

For antique dealer Joe Ley, the fond recollection of Fontaine Ferry Park has been almost an obsession. The memories are so rich that he refuses to sell any of the various amusement park memorabilia he’s collected over the years.

“Being an orphan, I used to walk 40 blocks down there. I didn’t have the dime to get in, so it was kind of a challenge to try and sneak in and crawl under the fence,” says Ley, owner of Joe Ley Antiques on East Market. “You walked in, and they had this beautiful penny arcade on each side. You could play the machines with a nickel and get a picture of Gene Autry.”

Behind a locked fence in Ley’s store are funhouse mirrors, a gypsy card reader, a lighted harp, a horse carousel and numerous games — just a few standout artifacts from what had been a fixture on the Ohio River in west Louisville’s Shawnee neighborhood.

Ley donated a good portion of the park antiques to the Frazier International History Museum for its upcoming exhibit to mark the 40th anniversary of the park’s closing.

“I hope it will make people aware who never had a chance to go visit the park,” says Ley. “A lot of people had their first date or were engaged down there. It’s going back down memory lane.”

Fifteen years before I was born, the amusement park had survived the Great Depression, the Great Flood of 1937 and two world wars. From 1905 to 1969, the park thrived. But it eventually succumbed to national trends that made it obsolete and, more importantly, was at the center of a mounting civil rights movement in Louisville that had grown restless with segregation.

“It was a place my parents told me I couldn’t go to, but you always had a curiosity about it,” says Rudy Davidson, president of the Shawnee Neighborhood Association, who was interviewed by the Frazier Museum for the exhibit. “One day I just decided to hop on my bike, ride by it and look. It was my only experience with it, really, because you really didn’t have a lot of freedom to even move around in the neighborhood.”

Until 1964, the park’s Jim Crow standard barred African-Americans from the fun and games. By the time it had opened to blacks, Davidson says, white flight had emptied much of its prestige.

My maternal grandmother hated Fontaine Ferry Park. Any recollection of it ended with a joyous remark of its violent closure. She spoke about it with a loathsome tenor that conveyed to me it was anything but a fun experience.

Perhaps I shouldn’t have such a negative view. Relatively speaking, my encounters with racism have been institutional and mild at best. However, my cynical viewpoint says any representation of it has been just another whitewashed history lesson about what was good for whites must have been hell for blacks. Still, there’s much to learn from such an important local history that it deserves a more delicate look.

For a couple of years, the Frazier Museum had been kicking around ideas on how to create a thought-provoking exhibit that would spark local interest and move away from its firearms motif. Fontaine Ferry fit perfectly — its mix of nostalgia and tension with local tidbits remains a vivid part of the city’s living memory, says Krista McHone, a spokeswoman for the Frazier Museum.

The museum has constructed a nearly 4,000-square-foot exhibit that includes more than 200 pieces of memorabilia, dozens of photographs and, most importantly, 50 oral histories that will be available at several video kiosks.

Instead of spraying a post-racial perfume on its uglier parts, the museum plans to make the park’s racial apartheid a centerpiece. The summer-long local history lesson includes a panel discussion with civil rights leaders in July about the progress of the past 40 years.

“We are presenting Fontaine Ferry from the carousel to the controversy. We want to tell the good, the bad and everything in between,” McHone says. “We want to get folks to ponder, especially as it relates to the racial divide.”

It would have fit nicely with the post-racial rhythm of today to tell a revisionist history of the park that appealed only to its rosier recollections of cotton candy, Ferris wheels and wooden roller coasters. It would have made us feel better about our city’s past, but it would have cheated everyone out of knowing how the stains of Jim Crow marked a community that prides itself as the gateway to the South without most of the Confederate, redneck hang-ups.

Forty years later it would have erased my grandmother’s — and an entire people’s — recollection and struggle, which would have been as much of an insult as the humiliation of segregation ever was. Growth cannot always be Kentucky Derby celebrations, U of L basketball games and downtown development. It requires a bit of hard-swallowed reconciliation that I live in a city where legal separation is abolished but professional firemen find humor dressing up as hooded Klansman and yelling, “It’s dark now, it’s KKK time.”

Thankfully it is a bygone era that most must look to their grandparents to even recall. But somewhere deep down it is a reminder of a kitchen-table conversation for a woman who viewed the park’s closure as a people’s opening day.