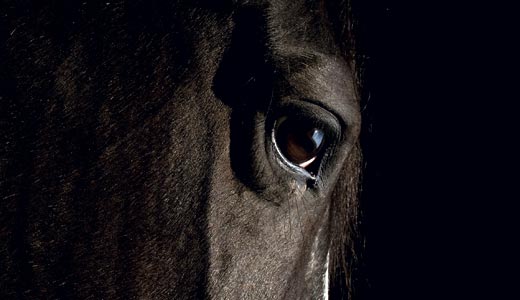 Just after Eight Belles crossed the finish line as runner-up in last year’s Kentucky Derby, the sleek, dark gray filly slowed to a strained gallop, and within seconds her front legs buckled, bringing her to the dirt.

Track workers rushed to the field, erecting a curtain around the disabled horse. Meanwhile, spectators watched in horror as the most exciting two minutes in sports took a tragic turn.

Eight Belles had broken both ankles, requiring the 3-year-old filly to be euthanized on the spot.

Critics lashed out at the racing industry, calling the sport everything from unsafe to barbaric. There was the expected outrage from animal rights groups like People for the Ethical Treatment of Animals, which called on jockeys to cease whipping the horses; bloggers opined from every conceivable angle, all but certain the filly’s demise was the result of performance-enhancing drugs; Congress called for an inquiry into the matter; even devoted racing fans questioned the state of the game.

The criticism was further fueled by the fact that a year earlier, 2006 Derby winner Barbaro died after sustaining an injury at the start of the Preakness Stakes, the second race of the Triple Crown. The colt had shattered his right hind leg, but managed to survive nearly nine months, during which time the media provided daily updates on his condition to a strangely captivated public.

In the wake of these two tragedies, racetracks enacted numerous safety measures, with Churchill Downs leading the way. In March, Churchill Downs Inc. announced a series of “groundbreaking” new rules, like enhanced drug testing, third-party analysis of track conditions and a ban on unsafe horseshoes. CEO Bob Evans touted the measures as “unprecedented,” saying, “I hope we can continue to work together to raise the bar in making racing safer and safer.”

These efforts, combined with the passage of time, seem to have effectively calmed the maelstrom, much to the disappointment of a handful of industry insiders who say the real problem — reckless breeding — remains unresolved.

These critics, many of them breeders, believe American thoroughbreds are more fragile than ever due to improper breeding. They say most racehorses today are engineered exclusively for speed and appearance, producing fast, fashionable and profitable animals, sacrificing durability in exchange.

“Much of the focus has been on what I call ‘peripheral issues’ such as medications and racing surfaces, but it’s my opinion that we’re ignoring the most significant factor: reckless genetics,” says Jason Hall, an active breeder, bloodstock consultant and owner of The American Thoroughbred Review.

In today’s market, Hall says, “Breeders need only produce a horse durable enough to walk through a sales ring to be profitable, and subsequently, you seldom hear a commercial breeder concern themselves with durability when planning matings for their mares.”

Because revenue is at stake, he says commercial breeders are reluctant to acknowledge their practices might be resulting in thoroughbreds that are genetically predisposed to injuries.

As for whether Barbaro and Eight Belles — who shared a common, coveted bloodline — were more prone to injury due to breeding, Hall says it’s possible, but no one will ever know for sure: “Either way, the silver lining is that it drew attention to the durability debate. Unfortunately, the commercial breeding industry did an effective job of sidestepping the core issues in an effort to avoid taking a financial hit.”

Following the deaths of Barbaro and Eight Belles, industry leaders say they did not simply wait for public scrutiny to subside, instead using it as a catalyst for change.

“I think the industry has responded very well, but I do think the public over-responded because of the incredible visibility of those really unusual instances. It’s easy to call anything a freak accident, but those really were,” says Ed Bowen, president of the Grayson-Jockey Research Foundation. “That being said, I think the industry was smart to say, ‘OK, the public is telling us we’re not doing a good enough job, let’s regroup.’”

Although he says organizations like his have been working for years to enhance the safety of the sport for both horses and jockeys, there still are injuries, meaning research must continue.

When asked whether modern breeding practices, particularly inbreeding, might be producing unsound, injury-prone thoroughbreds, Bowen is quick to say he has not seen any evidence proving that theory: “I don’t have any data to support it and I don’t have any evidence to refute it,” he says. “It’s easy to lapse into thinking horses used to be stronger and stouter, but that does not seem to be the case.”

The perception that racehorses are getting hurt more frequently also cannot be proven, according to Bowen, who says that until recently there was no standardized system for recording injuries.

That changed in 2007 when racetracks across the country began voluntarily submitting injury information to a national database. That same year, Churchill Downs reported 26 equine-related injuries at the track, 17 of which resulted in fatalities. Of those deaths, 14 occurred during races and three during training. Now, more than 70 tracks are participating in the reporting program, although because there is no organized body overseeing the sport, it is not mandatory, meaning the count still is not accurate.

A renowned breeding consultant here in the Bluegrass argues that not only are injuries on the rise, but that commercial breeders are to blame for carelessly destroying the breed.

“Ed Bowen is a company man and he’s saying what he knows he has to say to keep his job, but I don’t have anyone to answer to and I don’t care who gets mad,” says Ellen Parker, of Paris, Ky., who has spent her life studying thoroughbred bloodlines. In recent years, the outspoken pedigree consultant admits she has lost clients due to her belief that irresponsible breeding is producing weaker animals.

Even before Eight Belles was corralled into the starting gate at last year’s Kentucky Derby, Parker says she feared for the horse’s safety due to her family tree. She explains: The filly’s bloodline included three crosses of the famous racehorse Raise a Native, a stallion known for his speed, but that ran (and won) only four races due to weak ankles, which is exactly where Eight Belles broke down.

Further proving her point that inbreeding is rampant in the racing industry, Parker explains that not only did Eight Belles and Barbaro share common bloodlines, so did each of the 20 horses that ran in the 2008 Kentucky Derby.

“Commercial breeders refuse to acknowledge there is a problem because that would mean money out of their pockets. They are greedy and they want a quick return on their investment,” says Parker, adding that owners are no longer interested in durable horses that can have long careers, but rather horses from popular bloodlines that can win a few races and retire.

In the absence of refined breeding practices, Parkers says trainers have taken to medicating “broken” horses. Then there’s the increasing popularity of artificial turfs as a fix.

“I guess creating an unnatural track is their solution to breeding unnatural horses, rather than just fixing the root of the problem,” she says.

At this point, Parker and other insiders fear reckless breeding has gotten so out of hand that the future of American thoroughbred racing is uncertain.

“I have such a love for these animals, and all I care about is their health and well-being and the future of this sport, which won’t have a future if things continue down this path,” she says. “The sport is dying, and at this point I’m afraid it’s too late to get it back. But I sure wish someone would try.”