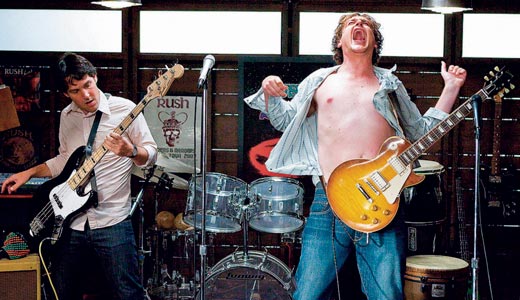 It’s the chicken and the egg theory of a successful comedy — what comes first, a solid script or the adept crew of actors? Either way, if you don’t have one, the other falls flat. The genius of “I Love You, Man” is actor Paul Rudd working some fine-tuned dialogue. The film excels when it hovers uncomfortably on awkward exchanges between characters. “See ya in a jiff,” Rudd’s character says to a potential man-friend over the phone. “See you in a jiff?” he repeats after he shuts his cell. “I’ve never said that before in my life.”

The story certainly lends itself to many of these awkward moments. The film opens with real estate agent Peter Klaven (Rudd) proposing to girlfriend Zooey (Rashida Jones from “The Office”). As they begin to sort out wedding details, Zooey realizes that Peter has no real guy friends who could fill out his side of the bridal party, other than his gay, estranged brother (Andy Samberg) and father (J.K. Simmons). He makes it his mission to go on “man dates” to try out potential best-man suitors and secure himself a harem of dudes.

The first go-round involves poker, pounding beer and projectile vomit. The second lands him lip-locked with a guy who misinterpreted his intentions. When Peter meets the charismatic Sydney Fife (Jason Segel from “Forgetting Sarah Marshall”) at an open house — Sydney showed up only to bait some cougars and score free food — Peter doesn’t hesitate to swap business cards and hope for a date.

The two instantly bond over a plate of fish tacos (“Fish tacos are the tits,” Sydney says) — Peter is drawn to Sydney’s carefree lifestyle, and Sydney urges Peter to come out of his shell and stand up for himself. A few late-night jam sessions and one Rush concert later, the two are practically inseparable, much to the dismay of Zooey, who has yet to really bond with Sydney.

Rudd and Segel have such an easy, natural chemistry that director and screenwriter John Hamburg probably just sat back and sipped a martini after yelling “action.” The caliber of supporting actors — Samberg, Jaime Pressly, Jon Favreau, Sarah Burns, Jane Curtain and Lou Ferrigno — only further illustrates that with a good team both in front of and behind the camera, a quality, true-to-life film will prosper. Will someone tell Nicolas Cage?