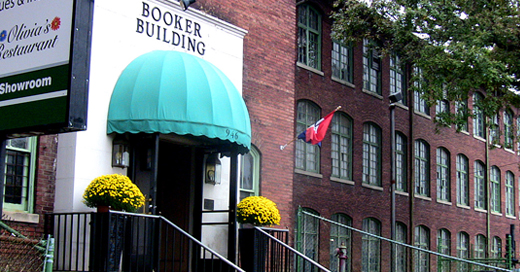 Ladies who lunch and go antique shopping (and men who do the same) have an unprecedented wealth of options these days, as a series of moves and changes has expanded the antique mall circuit from one popular eatery to three.

Let’s summarize: When the Louisville Antique Mall on Goss Avenue announced plans last year to move from its hulking 19th century brick industrial building to a different hulking 19th century brick industrial building on East Broadway, its critically acclaimed lunch spot, The Café, went off on its own to open a free-standing restaurant just east of downtown.

Then, not long after the Louisville Antique Mall made its move to East Broadway, a new luncheon establishment on its fifth floor revived the name of the old Colonnade cafeteria downtown. The move didn’t leave the old building on Goss vacant for long: Soon the Goss Avenue Antique Mall opened in slightly different but overlapping quarters. And sure enough, it has a lunch spot, too, dubbed Olivia’s Restaurant.

“The tradition continues,” its proprietors say, but with some differences: The new Colonnade is more upscale, with table service and white tablecloths, a marked difference from the old show in the Starks Building basement, which was a quick-service cafeteria, albeit a beloved local landmark — until lease issues drove it out of business when the Starks Building changed hands a couple years ago.

Like the mall it’s in, the Colonnade makes adaptive reuse of an old building, although it has been modernized in renovation. It’s a large room, perhaps big enough to accommodate 100 diners or so, with a high ceiling and big windows overlooking the city. The decor is simple, with walls painted bright colors of butter and tomato and red chiles. Protective glass covers white tablecloths, with bright golden cloth napkins.

Our lunch began with a complimentary mini-appetizer, a Louisville-style amuse bouche in the form of a ball of dense pale-green Benedictine on a lettuce leaf, garnished with a strip of red bell pepper and served with gourmet-style crackers.

Small side salads covered the basics: Shredded carrot, a cucumber round and a pale tomato wedge topped mixed lettuces that looked a bit dried out and, unfortunately, contained slimy bits that really should have been caught in the kitchen before they dumped the bag of mesclun onto the serving plates. Smoky tomato dressing looked like Thousand Island but tasted great, definitely improving an otherwise lackluster salad.

The Ol’ Colonnade Daily Special for Friday ($8.95) featured mild cod breaded in a thick, peppery, crunchy crust that didn’t bind to the fish too well. Creamy yellow macaroni and cheese was comfort food that resembled stovetop mac ’n’ cheese from a box. Creamy, tangy, fine-chopped slaw sprinkled with paprika was good, although it was interesting to see it served in addition to a side salad.

I went for tradition with a Louisville Hot Brown ($8.95). Served in a sizzling oven dish, it was a very basic model with thin-sliced turkey white meat drowned in a copious portion of thick cheese sauce, more domestic than the advertised French Mornay, and topped with a thick slice of tomato and two crossed strips of crispy bacon. I had to excavate for the toast points, which seemed to have been cut from grocery white bread and had almost completely disappeared in the cheese. It was a straightforward rendition of the Louisville custom, but bland and, frankly, far from the best I’ve tried.

Desserts, the menu said, are baked in house daily. Maybe. A slice of chocolate cake ($4.95) seemed as if it might have been baked a few days before. It was dry, lacking flavor and quite disappointing.

Service was excellent up to a point, but the arrival of a large party on the other side of the room left our server in the weeds. We were left waiting at the end of the meal and had a hard time tracking him down. Not entirely his fault, although management might have distributed the service more equitably. A filling if not entirely satisfying lunch, with iced tea ($1.95), came to $26.29, and we left a $5 tip.

Clearly a direct competitor to the Colonnade in the antique-mall genre, Olivia’s is similar but somewhat more upscale, both in decor and menu, although just about everything is attractively priced at $10 or less. It’s still Ladies Who Lunch, but you might call it Tasteful Ladies Who Lunch.

Located at the back of the cavernous Goss Avenue mall, it’s windowless and rather dark, and, to make matters worse, the track lighting appears to have been set up to illuminate paintings on the wall of what once was a gallery. Your plate resides in darkness while the lights shine directly into your eyes. A faint aroma of mothballs in the room also takes some getting used to, but in fairness, it becomes imperceptible after a few moments.

It’s otherwise a classy venue, all beige and earth tones with an old-fashioned horserace mural on one wall. Handsome walnut tables are topped in glass and furnished with comfortable walnut side chairs padded in black leather.

We started with a shared appetizer. Fried green heirloom tomatoes ($4.95) were disappointing: A tomato about the size of a golf ball was sliced into six paper-thin rounds, breaded heavily and fried to the chewy stage. A bed of mixed lettuces needed, but did not get, picking over to remove some dubious bits. Fortunately, the tomato rounds made passable vehicles for a creamy, piquant remoulade.

An heirloom tomato salad ($7.95) was similarly unexciting. The server declared it “enough for a meal,” so my wife chose it as a main course along with a cup of over-salted chicken-rice soup ($2.95). The salad turned out to be about eight thin slices of red, green and yellow tomato, drizzled with a decent vinaigrette. It was garnished with crumbled feta cheese and fine shreds of red onion along with apparently canned black and green olives and mandarin orange slices.

Many of the dishes are named after Derby winners. Seek The Gold ($6.50) paid off at the ticket window with a good, textured pimento cheese spread with just a little mayo on good, grainy wheat bread with lettuce and tomato. My side dish, Asian slaw, consisted of tired shredded cabbage in a dressing with a hint of sesame oil.

A slice of peanut butter pie ($4) tasted of the refrigerator.

All this and good, strong iced tea in tall glasses came to $32.17, and courteous, competent service earned a $6.83 tip.

Is it a wine shop or wine bar? It’s licensed as both, making it possible for consumers to enjoy a tasting, pick up a few bottles or both. Consumers purchase a smart wine card. Each drink deducts the appropriate charge (typically $2.50 to $4 per ounce, depending on the wine), until the card or the bottle needs refilling.

How much does a toy like this cost? Zaborowski offers a hint: “Two Kias.” He calculates that its convenience and the excitement factor will pay it off in due time.