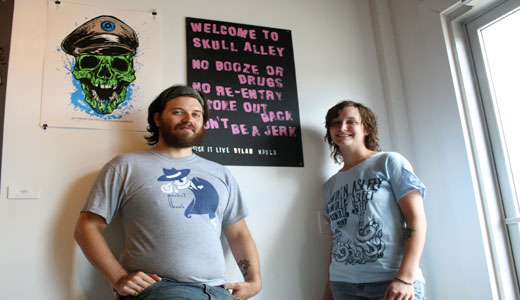 Skull Alley, which opened on June 16 with an art show, is the brainchild of Jamie Prott, a founding member of the Bardstown Road Youth Cultural Center (BRYCC House), and business partner Allyson Lowe. The two were hammering the last nail right before the show started.

“We are trying to have as many different events as possible,” Prott said. The venue will host art shows, concerts, poetry readings and more to bring in as diverse a crowd as possible.

Like the BRYCC House before it, Skull Alley, an alcohol-free venue, is an alternative to the 21-and-older bars and venues throughout Louisville, and its standing $5 cover charge is affordable. Parents should feel comfortable dropping their children off here, Prott said.

Prott decided to open the venue with Lowe after his brother Dylan’s death a year and a half ago. Dylan, a member of the local band Pocket Bomb, dreamed of opening an all-ages venue as well as doing a benefit CD for a local crisis center.

“We are working on a memorial benefit CD for him,” Prott said.

The CD will benefit The Center for Women and Families and feature artists such as Attica Attica, Black Cross, One Small Step, Lemuria and Defiance Ohio. It will be available at Skull Alley, as well as on the venue’s webstore.

“I feel like (Louisville is) about to be put on the map again with independent music,” Prott said. “It is overdue I think.”

Both Lowe and Prott are looking to eventually expand their business to incorporate other ventures, possibly publishing a magazine.