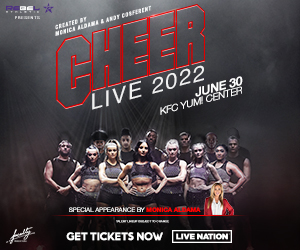 Bringing together fan favorites from the two most successful rival cheer programs in the country, Navarro College and Trinity Valley Community College, CHEER LIVE will feature 14x National Champion coach and best-selling author, Monica Aldama  alongside cheer stars such as Gabi Butler and Morgan Simianer. The full cast features Maddy Brum, Angel Rice, Dee Joseph, James Thomas, Jeron Hazelwood, Gillian Rupert, Cassadee Dunlap, and more to be announced. The premiere athletes all make mat for an electrifying exhibition of never-before-seen stunts and stage performances that are sure to have fans on the edge of their seats. Without the restraints of score cards, judges, and time limits, CHEER LIVE will transform the nail-biting sport of competitive cheerleading into a first of its kind premiere athletic event staged with the epic production value of a live concert.